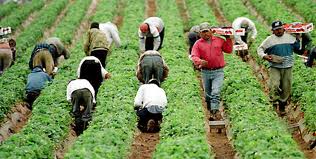 When giving thanks for a Thanksgiving meal, there’s one group who deserves a disproportionate amount of gratitude: the farm workers of the United States.

The roughly 1.8 million people who spend their days harvesting the crops and raising the livestock that wind up on American plates rarely get treated with the admiration they deserve. They work long hours in harsh conditions, often without steady salaries, paid vacation or sick leave. The median pay for farm workers in 2010 was $18,970, according to the Bureau of Labor Statistics.

It’s not a new issue. CBS News drew national attention to the poor treatment of farm workers more than 50 years ago in a broadcast called “Harvest of Shame” on the eve of Thanksgiving in 1960. (Watch the classic broadcast below).

Since then, that labor force has grown increasingly Latino, composed mostly of immigrants. Some 72 percent of farm workers were born outside the United States, according to the National Agricultural Workers Survey — most of them in Mexico.

Roughly half of U.S. farm workers are undocumented, leaving them more vulnerable to all kinds of abuses ranging from lower pay to sexual violence. The Justice Department has prosecuted seven cases of slavery since 1997, liberating over 1,000 farm workers from forced labor, according to Holly Burkhalter of the International Justice Mission.

Immigrants from Latin America don’t just harvest our crops — they also play a disproportionately large role in the livestock industry that supplies the American market with its Thanksgiving turkeys, according to the National Council of La Raza.

So when giving thanks this holiday season, don’t forget to give thanks for the men and women whose labor made it possible for you to enjoy your meal.