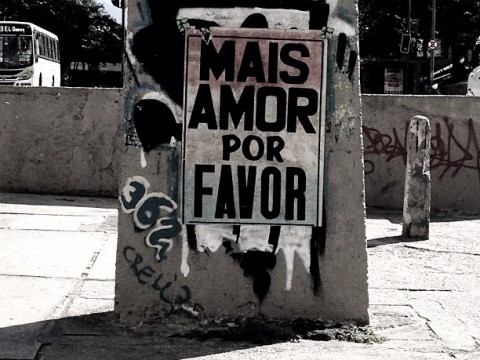 M.Phil. (2006) and Ph.D. (2007) in the interdisciplinary fields of Liturgy and Systematic Theology

Associate Professor of Preaching and Worship

Director of the Latino/a Center

Associate Professor of Worship and Preaching

Professor of Liturgy and Theology

This book honors one of the most important Brazilian theologians in the world today: Ivone Gebara. Articles by people from across the American continent discuss Gebara’s work in the form of a personal letter to her.

From the Introduction: “…The liturgical life confuses the markers between what is inside and outside of the liturgical space, the sacred and the profane, between the altar and the world…. This book wants Interviews

This book proposes a dialogue between philosophy, aesthetics, art, religion, theology and liturgy.

This book honors one of the most important Brazilian theologians in the world today: Ivone Gebara. Articles by people from across the American continent discuss Gebara’s work in the form of a personal letter to her.

From the Introduction: “…The liturgical life confuses the markers between what is inside and outside of the liturgical space, the sacred and the profane, between the altar and the world…. This book wants to connect liturgical practices, symbols and theologies with diverse areas of knowledge that are not often in dialogue with what happens in the Christian worship. The hope is that this book will expand the possibilities of thinking about the liturgical field in Brazil, its history and consequently the world.”

From the introduction: “This book is a narration of many imaginary conversations of a son with his father who became enchanted after he died. Structured in a liturgical format, what you will see in this book is the painful dealing with the remains that death leaves us and the attempt to capture and choreograph the intensity of the loss and emptiness that a death of a beloved father brings. Using theology, liturgy and critical theory, the book brings a wealth of issues as diverse as they are unexpected, in a (dis)continued talk, fractured by the presence of an absence and the hope of a time of gentleness, that in the words of famous Brazilian poet Chico Buarque, ‘is a time that redoes what was undone.’”

From the back cover: “In this series of essays, the writer uses philosophical post-structuralist tools to get at the connections between theology, religion and ritual. Transgressing the rationality of religion, Carvalhaes tries to undermine its excluding metaphysical structures, its universal categories and desire of appropriation and autonomy. It is a philosophical/theological/ritual attempt to rescue that which was left out in theological and religious discourses as arts and performances are invoked/evoked as transgressive partners in this endeavor.”

What’s Worship Got To Do With It? Interpreting Life Liturgically (Oregon: Cascade Books, 2018).

Liturgies from Below: Prayers from People at the Ends of the World (Nashville: Abingdon Press, 2020).

“A letter to Marc Ellis,” Scholarship in the New Diaspora: The Practices of the Intellectual in Exile, Edited by Susanne Scholz and Santiago Slabodsky

“Praying with the Unwanted People at the End of the World,” T&T Clark Companion to Christian Prayer, Edited by Ashley Cocksworth and John C. McDowell (New York: Bloomsbury T&T Clark, 2020).

“This Is Just The End: On How Not To Go Mad These Days,” Dwayne Howell and Chuck Aaron, Co-Editors, Preaching In/And the Borderlands (Oregon: Wipf and Stock, 2020)

“We the Humus – The Liturgical Performance of People, Animals and the Earth in the Anthropocene – liturgy” – Shannon

“The Sacraments Are from the Earth. Bread, Wine and Water in the Midst of a Neoliberal World That is Ending.”

“Oppressed Bodies Don’t Have Sex: The Blind Spots of Bodily and Sexual Discourses in the Construction of Subjectivity in Latin American Theology” In Indecent Theologians: Marcella Althaus-Reid and the Next Generation of Postcolonial Activists Ed. Nicolas Panotto (Borderless Press, 2016).

“Thinking Spiritually: Where Is the Spirit When We Think?” In Thinking Theologically. Ed. Eric Barreto (Minneapolis: Fortress Press, 2014).

“In Spirit and in Truth: The Liturgical Space as Territory.” In Common Worship in Theological Education. Ed. Todd E. Johnson and Siobhan Garrigan (Wipf and Stock, 2009).

“Paulo Freire’s Legacy: So Much To Be Done!” In Forum on Paulo Freire’s Pedagogy: Leaning Educationally into Our Future, Teaching Theology & Religion 22:1, Wabash Center, 2019.

“We Are All Immigrants! Imago Dei, Citizenship, and The Im/Possibility of Hospitality,” in Practical Matters, A Journal of Religious Practices and Practical Theology, Fall 2018.

“Christians and Yorubá People Eating Together: Eucharist and Food Offerings.” In Plura, Journal for the Study of Religion, Brazil. Vol. 7, No. 1 (January–June, 2015).

“And the Word Became Connection: Liturgical Theologies in the Real/Virtual World.” In Liturgy, Worship and the Social Media (Taylor & Francis). Vol. 30, No. 2 (2015).

“The Season of Easter: Imaginative Figurings for the Body of Christ,” by Cláudio Carvalhaes and Paul Galbreath. InInterpretation: A Journey of Bible and Theology. Vol. 65 (Winter 2011).

“Borders, Globalization, and Eucharistic Hospitality.” In Dialog: A Journal of Theology. Vol. 49, No. 1, “Boundaries, Border Identities, and Immigration” (Spring 2010).

“Canta y No Llores: Life and Death Around the Borders of U.S. and Mexico.” In Insights: The Faculty Journal of Austin Seminary (Spring 2009).

James V. Brownson. The Promise of Baptism: An Introduction to Baptism in Scripture and the Reformed Tradition(Grand Rapids, Eerdmans, 2007). In Interpretation: A Journey of Bible and Theology (Richmond, VA, 2008).

“Stories from the Front (of the Classroom),” Wabash Center’s Blog Series, February-September 2016.

“God and Impeachment in Brazil – How a Christian Bloc Helped Oust Brazil’s President.” By Cláudio Carvalhaes and Raimundo Barreto, In The Christian Century (November 2016).

“Stories from the Front (of the Classroom).” In Wabash Center for Teaching and Learning in Theology and Religion, (Spring and Summer 2016).

“Preaching in the 21st Century: Metaphors and Ideologies.” In The Presbyterian Outlook (July 2015).

“History of Sacraments and Spirituality/Roots and Understandings in Various Faiths.” In Horizons (magazine for Presbyterian Women, March/April 2012).

“Psalm 126.”In ‘Expecting the Word!’ Words Matter Advent Devotional 2011 (published by Justice for Women Working Group of the National Council of Churches, 2011). www.wordsmatter.org

“Surprising Wonders in Worship and Sacraments.” In Advocate (journal of the Association of Presbyterian Church Educators, Greenville, SC, August 2011).

“International Migrants Day – December 18.” In Worship Resources (created by a request from Presbyterian Ministry at the United Nations). http://presbyterian.typepad.com/peacemaking/2010/12/international-migrants-day-december-18.html

“Do Justice, Love Kindness, Walk Humbly with Your God” (daily devotional for 6/28/2008). In The General Assembly Bible Studies and Daily Devotionals (developed in partnership with the Office of the General Assembly and The Thoughtful Christian, a ministry of the Presbyterian Publishing Corporation).

“Where Are Your Dreams? Martin Luther King Jr. Day.” In Register for the Company of Pastors. Office of Theology and Worship, Presbyterian Church (U.S.A.), Louisville, KY (Spring/Summer 2008).

“How to Be Successful in Religious Business” In The Herald News. Fall River, MA (2001).

“Queering our Worship Services,” with Janet Walton, Aasta Hansteen Lecture on Religion and Gender at the Faculty of Theology at the University of Oslo, Norway, September 2018.

“Re-Imagining Worship as Acts of Defiance and Alternatives in the Context of Empire,” Council for World Mission (CWM), Manila, 2 -8 August, 2018.

“Come with Joshua to the walls of Mexico and the walls will be crumbling down,” DARE 2018!, Challenging Empires Series, Mexico City, 2018.

“Beauty’s Vineyard: A Theological Aesthetic of Anguish and Anticipation, Society for the Arts      in Religious and Theological Studies, AAR&SBL 2017, Boston, MA.

“Encountering each other neither here nor there, but in Spirit and in Truth.  Learning from Jesus and the Samaritan Woman.” At Congress for the Mission of the Dominican Order, 800th Jubilee of the Order, Rome, Italy, January 2017.

“Birds, People, Then Religion—An Eco-Liberation Theological and Pedagogical Approach to Interreligious Rituals.” At the American Academy of Religion, 2016.

“Preaching from the Margins of the World – Preaching and Prophecy,” ACTS D. Min. in Preaching, Association of Chicago Theological Schools, )June, 2016).

“The Arts, Race, and Activism: From the Classroom to the Streets.” At Society for the Arts in Religious and Theological Studies, American Academy of Religion (Atlanta, 2015).

“Liberation and Charlatanry in Academia: We have always been a farce. The good savage and the demonic cannibal.” At Liberation Theologies Group, American Academy of Religion (Atlanta, 2015).

“Yorubá and Black Theologies, a Dialogue.” At the Black Theology Group, American Academy of Religion (Atlanta, 2015).

“The Guarani Indigenous People in Latin America in Search for the ‘Land without Evil’ and Process Theology.” At “Seizing an Alternative: Toward an Ecological Civilization,” 10th International Whitehead Conference and 9th International Conference on Ecological Civilization, Pomona College (Claremont, CA, 2015). https://www.claudiocarvalhaes.com/articles/guarani-indigenous-people-latin-america-search-land-evil/

“Preaching from the Margins of the World – Preaching and Prophecy,” ACTS D. Min. in Preaching, Association of Chicago Theological Schools, Summers 2015.

“’Canta y No Llores’: Finding Joy in the Midst of the Struggle.” At Latina/o Religion, Culture, and Society Group, American Academy of Religion (San Diego, 2014).

“The Showing of a Doing: Preaching, Worship, Borders, and Prophecy (colloquium). At 25th Anniversary Session of the Hispanic Summer Program, University of Saint Mary of the Lake, Mundelein Seminary (June 2014).

“Christians and Yorubá People Eating Together in Brazil: Eucharist and Food Offerings” (paper presentation). At “African Diasporic Spirits in the Americas,” American Academy of Religion (November 2013).

“Faith and Politics in the Public Square” (speaker and worship leader). At Third Institute for Faith and Public Life, Princeton Theological Seminary (September 2012).

“Quien Soy y a Quien Pertenezo? Who Am I and to Whom Do I Belong? Quen Sou Eu e a Quem Pertenço?” (performer). At VI Gathering of Indigenous People – ALEAPI / World Council of Churches (Berlin, El Salvador, November 30–December 4, 2009).

“Social Witness for the 21st Century: A Liturgical-Ethical Perspective.” At the Theological Educators for Presbyterian Social Witness Gathering (Chicago, October 2009).

“The Poor Don’t Have Sex: The Blind Spots of Sexualities and the Bodies in the Construction of Subjectivity in Latin American Theologies.” At Religion in Latin America and the Caribbean Group seminar “A Theological Post-Colonialist Approach,” American Academy of Religion (November 2005).

“The Spiritual Marks of the Body.” At Anglican Institute for Theological Studies (São Paulo, Brazil, July 2005).

Response to “Languages That Shape the Soul: The Role of Arts in Theological Education” (lecture by Mark C. Taylor). At Society for Arts, Religion, and Contemporary Culture Fall Symposium (New York, November 2004).

“The Relations Between Theology, Liturgy, and Life in the Twentieth Century.” At Anglican Institute for Theological Studies  (São Paulo, Brazil, June 2004).

“Why Do We Have to Scream Every Time We Talk?” (panel discussion with Latino/a theologians and Prof. Dr. Daisy L. Machado). At Union Theological Seminary (New York, April 2003).

Preacher, “According to the pace of the children,” Children’s Defense Fund (CDF)’s Proctor Institute for Child Advocacy Ministry 2018, CDF-Haley Farm in Clinton, TN.

Preacher and Workshop Leader, “The Art of Preaching in the 21st Century” Conference, Candler School of Theology (October 2011).

Workshop Leader, “Behold! We Are Many, We Are One,” National Conference on “Intercultural Worship and Music: Exploring Sound, Space, and Sacrament,” Vancouver School of Theology, United Church of Canada (May 2011).

Preacher, “The Preaching of Joy,” Festival of Homiletics (Minneapolis, May 2010).

Editorial Board, Currents of Encounter Series, Brill, Netherlands, since 2015.

Member, Society for Arts in Religious and Theological Studies, since 2014.

Editorial Board, II International Conference of the EST (School of Higher Theological

Advisory Board, Ecclesial Practices: Journal of Ecclesiology and Ethnography, since 2012.

Founding member, Society of Race, Ethnicity, and Religion (SRER), since 2012.

Editorial Board, CrossCurrents journal, since 2011.

American Council of Churches), since 2011.

Board Member, Society for the Arts, Religion, and Contemporary Culture, since Fall 2005.

Member, American Academy of Religion, since 2001.

Founding member, Board of Editors of Postmodern Religious and Theological Studies in Brazil, 2004–2007.

Animate, an ecumenical, intergenerational workshop in worship and the arts, Birmingham.

Africa, Step Forth in Faith, 9th General Assembly of the All Africa Conference of Churches, Maputo, Mozambique.

“Hospitality in the Household of God,” Congregations and the Global Church, Worldwide Ministries (2001); “World Mission 2007: A Celebration of Grace,” Presbyterian Church (U.S.A.).

Translator and Cultural Interpreter, “The Afro-Brazilian Religions of Salvador, Bahia,” class of Union Theological Seminary-NYC and the Institute for Higher Education in Bahia, ITEBA, Brazil (August 2004).