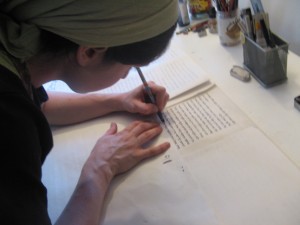 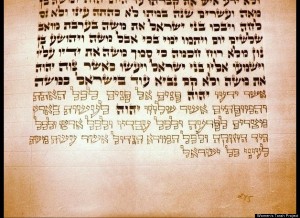 Some say her work is forbidden. Some might say it’s a complete waste of time. Others remain silent. But Julie Seltzer, one of a few women in history to write a complete Torah scroll, is just following her heart.

“My love of Torah led me to be a scribe,” she says.

Jews all over the world are preparing for Shavuot, the holiday that celebrates receiving the Torah at Mt. Sinai and is characterized by all-night learning of sacred texts. However, the question of who may write this ancient scroll continues to be debated.

Seltzer, who lives in San Francisco, is part of a growing, loosely knit community of approximately 50 female Jewish scribes living across the United States and in Israel. They span the spectrum of Jewish identity, from post-denominational to Orthodox, but are uniformly motivated by a love of the Hebrew Letter, considered by Jews to be the building blocks of the universe.

The existence of so many women scribes is unprecedented in Jewish history.

In 2007, Seltzer’s teacher, Jen Taylor Friedman, became the first woman to write a complete Torah scroll (she is currently working on her fourth). Tearing the parchment ceiling aside, writing a Torah is no small feat: 4,000 laws dictate how the 304,805 letters may be written, and the process can take a year or more to complete.

View an interactive timeline of the history of Jewish women scribes, with photos, videos and additional resources.

Women aren’t shying away from the challenge. The Women’s Torah Project (WTP), which was conceived in 2000 and completed in 2007, is the work of 12 scribes and artists and is the first Torah completed by a group of women. Seltzer was a part of this project.

The other WTP scribes are currently putting ink to parchment for a number of projects: Hanna Klebansky is raising funds and writing the first scroll to be written by a woman in Israel; Linda Coppleson is writing her first complete scroll, for a Reform synagogue in Brooklyn; Rachel Reichhardt is repairing an old Torah for a Jewish retirement home in Sao Paulo, Brazil; Irma Penn completed a scroll that will be dedicated this weekend in Winnipeg, Canada; and Shoshana Gugenheim, who was the lead scribe for WTP, is now organizing another collective Torah project calledWomen of the Book.

Incorporating the work of 54 artists and scribes, the Women of the Book scroll will be comprised of 54 interpretive panels of parchment based on the 54 portions of the Torah. While this won’t be used for ritual purposes in a synagogue, the project has allowed Orthodox female scribes who don’t write Torah scrolls for personal religious reasons to take part in this new movement of female scribes.

An Orthodox Jew, Nava Levine-Coren writes megillot (scrolls) and ketubot (marriage contracts), which most Jewish legal authorities agree may be written by women. She’s always been drawn to the Hebrew letters, and her work for Women of the Book is the realization of a dream.

“When I looked in the Torah — at the black ink on the parchment — it seemed intensely alive,” she says.

But as a woman, Levine-Coren always assumed scribal work was not an option. When she found a teacher — an Orthodox man who chooses to remain anonymous — she says her heart stopped momentarily: Her secret dream could become reality.

Though she won’t write a Torah herself, Levine-Coren says she’s excited and proud of the Jewish women who are writing scrolls. And she has advice for women who feel drawn to this sacred art, but feel discouraged or unsure.

For Julie Seltzer the Hebrew letters themselves proved to be the best teacher.

In October 2009, she began preparing to write her first complete Torah. It was days before Simchat Torah, the Jewish holiday when the yearly cycle of reading the Five Books of Moses is completed and immediately begun anew.

In order to have the last column in her Torah to be the opening creation story, Seltzer was inspired to begin writing her scroll at the second column.

She had recently heard a teaching about receiving the first Torah. Moses is on Mt. Sinai. God shines before him, and emerging from the Divine Right Hand is an endless stream of letters composed of black fire on white fire: the Primordial Torah, one long chain of Divine name. From this, Moses copies his Five Books, breaking the fiery stream into the words and spaces that are read in Torah scrolls to this day.

Riding the train in San Francisco — where she will scribe her scroll at the Contemporary Jewish Museum, the first time a Torah has been written in a public space, by man or woman — Seltzer opened a book to review the text she would soon write. What she read made her laugh out loud. The first words of the second column, from Genesis 3:16, where she had chosen to begin her scroll, come after Adam and Eve have eaten from the Tree of Knowledge of Good and Evil. God’s not too happy, and Eve bears the brunt. God curses her: ְְוהוּא יִמְשָׁל-בָּךְ — “…and he shall rule over you.”

For a Jewish woman trying to make her way in a sacred role that has basically always been inhabited by men, this might be the one sign from God you don’t want to see. But, sitting on the train, Seltzer recalled the story of the Primordial Torah, the stream of letters without space or end that Moses received from God and formed into words. She wondered if she could move a space around and glean some new meaning.

It worked: One simple space change and a message of female subjugation was flipped on its head. The Hebrew that emerged was empowering: והוא ימש לבך — “…and it will touch your heart.”