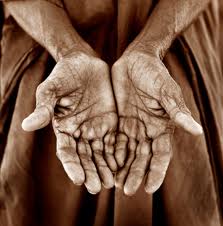 A story that I was told when I was younger involved a woman who could best be described as a traveler. Her travels would take her all over the world and on one occasion she finds herself trekking through some hills and a forest. As she is walking she comes upon a stream, the water of which she uses to wash up. While washing she notices at the base of the stream a shiny jewel that she picks up, inspects for a moment, and then places into her backpack before moving on.

Some time later she comes upon another traveler, but this one is not doing so well. He is need of some food and water and appeals to this woman for it and she opens her bag to look for something to give to him, he notices the jewel from the stream. He asks her if he can have that and without any hesitation she gives it to him. The man is most ecstatic as he runs to the nearest town, thinking how wealthy he will now be.

A few days later he comes back to the same hills looking for the woman. When he finds her, he returns the jewel and says he needs it no longer. The woman is confused and says that he seemed to be so happy with it, and becomes even more confused after he tells her that she has something else that he is need of. “I am a simple woman and don’t really have so much. What is that I could possibly have that you would want?” He responds, “Take back your jewel — I don’t want it any longer. What I need from you is the thing that exists inside of you that helped you give it to me in the first place.”

The prophet Muhammad, peace be upon him, said, “Richness does not come from having an abundance of things from the earth, but richness comes from having a richness of the soul.”

The satisfaction that stems from service and giving to others is something that is quite unmatched. The unfortunately reality is that most of us don’t always see that we have something to give. At a time when selfishness have become more normal than selflessness, many of us are not giving our time, our wealth, or really any of what we have the potential of giving to others. We look at what we will lose instead of what others will gain and that becomes our primary motivation. An absence of figures around us demonstrating qualities of selflessness makes it that much harder to realize as a quality that should be embraced. The ones who end up losing the most though are we ourselves.

Have you ever spent an hour serving food in a soup kitchen? Or a week traveling to an area struck by a natural disaster to rebuild homes, clean-up parks or simply let those who have lost so much know that things will be OK? The performance of those acts more often than not will yield a desire to perform more because the return is not a tangible gain, but an internal one. You not only see but also feel the difference an hour makes. Imagine what two or three hours could do.

Maimonides, a 12th century Jewish scholar and physician, wrote about Eight Levels of Charitable Givingwhile Imam Al-Ghazali, a well-known Muslim scholar who passed away in the early 1100s, wrote about the Inner Dimension of Giving. Both are considered to be thought-leaders, intellectuals and revivers of their respective traditions, and both acknowledged and embraced the importance of giving to others. The idea is not owned by any specific religious tradition, yet many, if not all, will emphasize it as it is nearly impossible to reach your full potential as a human being if all you think about is yourself.

My giving has to be unconditional to the best of my ability. I shouldn’t look first to see if the hand that is reaching out for my hand matches my own in skin color or country of origin. If the person in need looks like me, thinks like me or believes like me. To get myself to that point, I have to first begin to do. Ask yourself in an honest way, “What have I given to anyone in the last day, week, month of my life?” Start small and give an hour of your week or a day out of your month to some service initiative. Save a few dollars a day for the sole purpose of giving it away to someone who needs it, whether through an organization, a collection box or a person you run into on the street. Your giving, even if small in quantity, can make a big difference to both the people you help today, and the person you will be tomorrow.