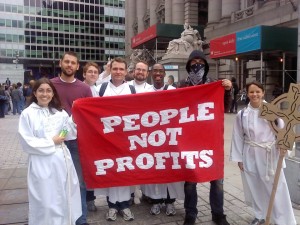 I had been marching through the streets of downtown Boston for an hour before I realized that the rhythm and cadence of “We are the 99 percent!” is exactly the same as “The people want to topple the regime!” the chant of Egyptian protesters who brought down the dictatorship of Hosni Mubarak last January.

My father teaches at the American University in Cairo, and we moved to Egypt when I was 15 years old. Coming back to the U.S. to start a Ph.D. program 13 years later, I felt like I was coming home, but I also knew that my connection to Egypt would never be severed. So I had that chant stuck in my head for months after spending anxiety-filled hours and sleepless nights following developments on Facebook and Twitter as many of my closest friends camped out in Tahrir Square. Hearing such a similar call here in the U.S. brought back that feeling of pride and hope that I had while watching a generation of disempowered youth take back their country, and it gave me a taste of the courage that led those brave young women and men into the streets.

A number of those involved in the Occupy Wall Street movement (both in New York and in other cities around the country), as well as commentators, have drawn parallels between what we are seeing in the U.S. today and what we saw in Tunisia and Egypt a few months ago. As Cornell West eloquently put it, “This is an American Autumn in response to the Arab Spring.” That said, the factors that have led to the occupation of Wall Street are very different than those that forced Tunisians and Egyptians (as well as Libyans, Syrians, Bahrainis and Yemenis) into the streets: We do not live under a dictatorship, we enjoy certain freedoms and rights that they lacked, pepper spray is not tear gas, and we do not have to worry that our military might be ordered to fire upon us. But we have shared frustrations: a common feeling of disempowerment, of having so much to offer our country and being stymied at nearly every turn by the influence and power that is purchased with monetary wealth. So while the analogy is not perfect, there are enough similarities to make it meaningful, even if the vast majority of the 99 percent is part of the global 1 percent due to their U.S. citizenship alone.

The similarities do not end with the protestors. The way that the police, government officials and the mass media frame the story of these protests reminds me of the story that Mubarak and the Egyptian State media told a few months ago. Pro-Mubarak spokespeople admitted that the demands of the protesters were legitimate up to a point, and they even praised the noble youth who had taken to the streets in the early days of the movement, but they also said that the movement had been infiltrated and hijacked by foreign influences (Israel and Iran) and people with “agendas” (the Muslim Brotherhood). There was no truth to any of these claims, just as there is no truth to Boston Police Commissioner Edward Davis’ recent claim that the Occupy Boston movement has been taken over by anarchists. But in both cases they attempt to excuse sometimes violent police intervention in peaceful protests while keeping up the pretense that they are on the side of the people.

Another great similarity between Occupy and Tahrir is the way that it has brought diverse groups of people together. During the Egyptian revolution I was inspired watching Coptic Christians protect Muslims as they prayed on Friday, and Muslims protect Christians as they held Mass on Sunday. And one of the most inspiring aspects of the Occupy movement for me as a Muslim chaplain is the Protest Chaplains. The Protest Chaplains began as an effort to give visibility to Christians in the movement, but it soon grew organically into an interfaith group that created space for all religions, as well as those who identify with non-religious traditions such as atheist Humanism, to bring their values to the streets in solidarity. Over the last few weeks we have joined each other in the Faith and Spirituality tent at Occupy Boston for yoga classes, meditation workshops, Jewish services, Muslim prayers, Christian worship and just to sit and reconnect with the peace within ourselves when things around us are tumultuous. We have created a special place down at Occupy Boston, a place where all are welcome, and we are impervious to being separated by those things that politicians and the media so often use to keep us apart.

The Faith and Spirituality tent at Occupy Boston is not an anomaly, it is a manifestation of some of this movement’s core principles in the realm of religion. The Occupy movement is characterized by consensus building: no decision is made that effects the group unless it has been agreed on through consensus at a general assembly, which ensures that in the camp, and in the movement, there is always a space for everyone, and we all have an equal voice. This has helped to foster one of the most inclusive communities that I have ever had the honor to call myself a part of. Similarly, the Faith and Spirituality tent is a place where all are welcome, regardless of their specific beliefs and traditions. Far from staking out space for themselves, individuals constantly strive to make more room for others to enter. This is truly a beautiful thing, especially when religion is so often labeled as divisive, as something that we do not discuss for fear that it will cause a rift in whatever jerry-rigged unity we have cobbled together by putting our differences aside instead of celebrating them in front of each other.

But it is not enough for us to have that space in Dewey Square. We need to find a way to bring it to the rest of the country, to the rest of the world. On Oct. 9, still only months after the revolution, the Egyptian military violently broke up a predominantly Coptic protest, killing 24 civilians. While this was going on, the news anchors on the state television channel reported that Christians were attacking the military and, amid false reports that soldiers had been killed, they called on Egyptian civilians to come into the streets and protect them from other civilians. The short-term result was that roaming gangs of Muslims took to the streets looking for Christians to beat up. The long term result is an increased risk of sectarian strife and the possibility that Egypt will lose all that it gained in the revolution.

It may be easy for some to blame religion here, but they would then miss the point that those in power will use whatever they have to keep a population that is demanding justice and accountability divided. They will seek out whatever opportunities they can to pit us against each other and distract us from the real issues in our society. It remains for us to remove as many of those opportunities as possible, not by trying to ignore our differences, but by embracing them and still finding ways to come to a meaningful consensus. This requires that we stop thinking of each other as being on opposite sides of some conflict, but as standing next to each other on the same side of the universal struggle to improve our world. This requires that those who follow religions not view those who do not as having less access to justice and moral goodness than they do, and that atheists, new or otherwise, not try to lay all the blame for the world’s problems at religion’s door. It is by rejecting the narrative that religions are fighting each other, and that reason is fighting faith, that we will disarm those forces that truly stand in the way of our success, and we will enable ourselves to co-create a more just society, one that thrives in its diversity, and revels in its singularity.