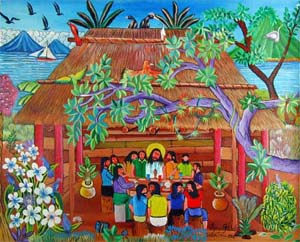 World Communion Sunday – celebrated the first Sunday in October – is one of the most venerable of “special Sundays.” The day has taken on new relevancy and depth of meaning in a world where globalization often has undermined peace and justice – and in a
time when fear divides the peoples of God’s earth. On this day we celebrate our oneness in Christ, the Prince of Peace, in the midst of the world we are called to serve – a world ever more in need of peacemaking.

The Department of Evangelism of the Federal Council of Churches (a predecessor body of the National Council of Churches) was first associated with World Wide Communion Sunday in 1940 when the department’s executive secretary, Jesse Bader, led in its extension to a number of churches throughout the world.

Today, efforts to promote World Communion Sunday are carried out by participating denominations, and several produce materials geared toward this observance. Please contact your denomination’s national offices to inquire about the availability of such
materials. Click below for a few examples of ways that denominations and congregations lift up World
Communion Sunday.