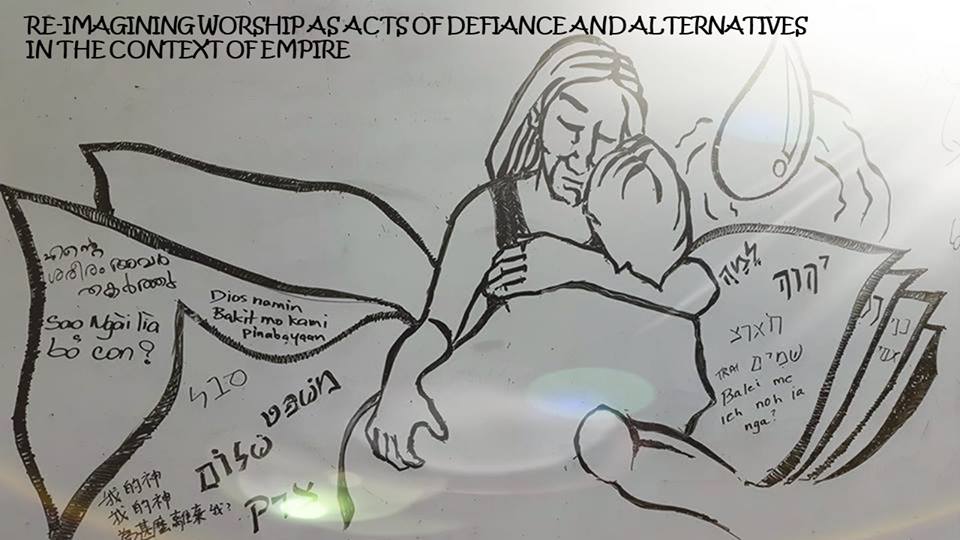 God’s mission has always taken place in the midst of Empire. God becomes incarnate through Jesus in an imperial world. While the story of his birth and his eventual execution tell a story of adversity in the midst of Empire, the story of Jesus also tells a story of defiance in the face of death, and more importantly through his resurrection it tells a story of hope. Our stories today parallel the story of Jesus in the midst of Empire. We speak of Empire, because we discern a coming together of economic, cultural, political and military power in our world today, that constitutes a reality and a spirit of domination, enslaving God’s creation; an all-encompassing global reality serving, protecting and defending the interests of powerful corporations, nations, elites and privileged communities, while imperiously excluding even sacrificing humanity and exploiting creation; a pervasive spirit of destructive self-interest, even greed – the worship of money, goods and possessions; the gospel of consumerism, proclaimed through powerful propaganda and religiously justified, believed and followed; the colonization of consciousness, values and notions of human life by the imperial logic;  a spirit lacking in compassionate justice and showing contemptuous disregard for the gifts of creation and the household of life. The challenge before the church today is to become a discipleship community, following the example of Jesus in our public witness in the context of Empire.

As faith community, worship is central to the calling and being of the church. Church is a community that gathers together in worship to affirm its faith in the Divine and the Divine mission of redemption and healing. Worship inspires and anoints the community to translate this mission into radical social transformation in the here and now by enabling their agency to turn the world upside down. In worship we celebrate the spirituality of resistance and reconstruction.

Today, we live in the context of the fetishization of the Empire and the idolatry of the market. The imperial colonization of our consciousness, faith and spirituality has reduced our worship and sacraments into rituals that legitimize the Empire. We read in the Bible the story of the liberated slaves who ended up creating and worshipping idols. The story of the Golden Calf is an invitation to critically evaluate our faith and spirituality to see whether we have replaced the God of the oppressed with the ungods of power, prosperity, and status quo.

The dominant always uses religious institutions and rituals to create and legitimize new idols which ensure them prosperity and power. Idolatry is nothing but the fetishization of our imperial projects, and liturgy in the context of idolatry celebrates the sacrifice of the powerless and the voiceless in the altar of patriotism, progress, family values, racism, casteism, patriarchy, heteronormativity and cultural nationalism. Ungods have been created in history to offer spiritual and theological legitimization to the pyramids of injustice and exclusion. We are more comfortable in depending on the mercy of the ungods who rule us, than in the empowering presence of the liberating God.Religion with its distorted theology, liturgy, and morality continues to incorporate its followers into the band of idol worshippers. We have become devotees of the Golden Calves.

This is the context in which we need to re-imagine worship as rituals of defiance and alternatives.  Prayer, according to Jewish theologian Rabbi Abraham Joshua Heschel, “is meaningless unless it is subversive, unless it seeks to overthrow and to ruin the pyramids of callousness, hatred, opportunism, and falsehoods.” To put it differently, worship is a subversive activity that contests and overthrows the prevailing sinful order of injustice and inequality.For Moses, the Mount Horeb experience was not only an alternative experience of theophany, it was also a tutorial for an alternative understanding of worship. The alternative experience of theophany enabled Moses to re-imagine God as the vulnerable One, deeply affected by the scars of slavery. In the vision of the burning bush Moses encountered God as a co-sufferer who was embodied in the sufferings and struggles of the enslaved communities. Through worship the enslaved community realized that the blazing fire of the Empire cannot destroy the beauty of life. The green leaves in the liturgy of the burning bush empowered the community to believe in the possibility of a beyond of Egypt.

Moses’ commissioning into the mission of liberation was also a liturgical act. He was asked to remove his sandals because he was standing on sacred ground. Moses’ removing of the sandals was a rite of passage or an initiation ritual to become flesh in the struggles of the colonized people.  It was a public denouncement of his privileges and power which was a prerequisite to get organically connected with and grounded in the struggles of the underdogs. Worship is therefore a life-changing experience where we are invited to realize and denounce our power and privileges in order to become credible and authentic comrades of the communities at the margins who are engaged in the salvific mission of turning the world upside down. Worship is our political engagement to overthrow and ruin the pyramids of injustice.

Egypt is around us and within us, and we need to discern it and gather the prophetic courage to destroy the Golden Calves of our times. It is our faith imperative to occupy our churches, our spiritual practices, and our institutions, so as to reclaim them from the worship of the ungods. It is in our unending journey towards freedom, dismantling the pyramids of systemic sin and evil, that we worship the God of life in truth and spirit.

To this end, the Council for World Mission is initiating a new project, “Re-imagining Worship as Rituals of Defiance and Alternatives in the Context of Empire.”

The methodology of this work will be grounded in 3 major pedagogical elements lived in Latin American liberation pedagogy called: To see To Judge to Act.  To seemeans to live the situation, to feel, to listen, to be with people and gain consciousness of what is happening from, with and through the eyes of local people. To judgemeans what needs to be done based on what was seen, felt and learned during this time together. It is the ethical moment of organizing and deliberating the next steps. To actmeans to put in practice the resolutions chosen by the people.

In order to do that, we will have a group of local people with various expertise to get together and plan the work in a specific community. Pastors, educators, theologians, Biblical scholars, artists, scholars of other fields, community leaders, social agents, etc, will meet to discuss the best way to approach a specific community. The Number of people can be discussed. A proposal of 7 days of work entails the following:

every participant will bring some expertise to the table

establishing the goals around the major issues at stake

learning how to do research and liturgical resources

map the chosen community and evaluate strategies of action

sharing of experiences and resources