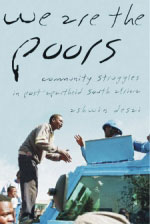 When Nelson Mandela was elected president of South Africa in 1994, freedom-loving people around the world hailed a victory over racial domination. The end of apartheid did not change the basic conditions of the oppressed majority, however. Material inequality has deepened and new forms of solidarity and resistance have emerged in communities that have forged new and dynamic political identities. We Are the Poors follows the growth of the most unexpected of these community movements, beginning in one township of Durban, linking up with community and labor struggles in other parts of the country, and coming together in massive anti-government protests at the time of the UN World Conference Against Racism in 2001. It describes from the inside how the downtrodden regain their dignity and create hope for a better future in the face of a neoliberal onslaught, and shows the human faces of the struggle against the corporate model of globalization in a Third World country.