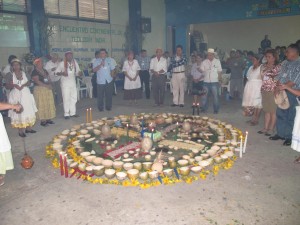 Some 40 theologians, most of them indigenous and representing different regions of the world, will meet in La Paz, Bolivia this weekend to share their various experiences and theological reflections.

This consultation is a follow-up to the world indigenous consultations called by the World Council of Churches (WCC) in Baguio, the Philippines in 2008 and Geneva, Switzerland in 2009.

At the same time this event is unique in being the first of its kind as a “coming together” of Indigenous Peoples’ spiritual and theological resources with representatives of two major commissions of the WCC, the Commission of Faith and Order and the Commission on World Mission and Evangelism (CWME). The goal is to assert that the integrity of life is pivotal to all ecumenical endeavours.

“It is a valuable effort for the indigenous processes of re-constitution of the indigenous nations and the reaffirmation of their spiritual values,” stated Abraham Colque Jimenez, principal of the Andean Ecumenical Higher Institute of Theology (ISEAT).

“The interaction of these three programmes of the WCC is a response to the mandate of the WCC Assembly in Porto Alegre in 2006, which called for the fellowship of churches to be informed by indigenous wisdom and theologies,” said María Chávez Quispe, who coordinates the WCC Indigenous Peoples programme.

“We expect to open new horizons for the theological dialogue within the churches,” she said. “But also, we expect to begin a process of dialogue which enables us to respond in a very creative way to the overlapping crises that this world is facing, especially the indigenous communities.”

The consultation will facilitate a process of listening and learning about the distinctive indigenous spiritual traditions and resources, by focusing on peoples’ visions of and the capacities to affirm and safeguard life in all its forms.

The group will explore ways in which they can strengthen dialogue, contribute to and learn through conversations with partners from the Commission on Faith and Order and the CWME as part of ongoing efforts to discern the content and character of the ecumenical movement in the 21st century.

The consultation hopes to contribute to reflections on the Faith and Order document “Called to be one church” and CWME’s work on “transformative spirituality” towards a new statement on mission to be presented at the next WCC Assembly in 2013.

The gathering will take place in the context of the millenary cultures of La Paz’s surrounding Andes and be inspired by the mystic rituals of the Aymara people. The international group will reflect on the similarities and differences of their spiritual traditions in order to affirm the valuable gift of indigenous spirituality to the church and to enrich the ongoing reflections of the WCC commissions.

Another aim of the gathering is to explore the indigenous traditions of spiritual expression (narratives, symbolism, songs, rituals, textiles etc.) in order to strengthen theological languages that provide an alternative to western civilization’s fundamentally Hellenic rationality which is the usual basis for official and mainstream theological reflections.