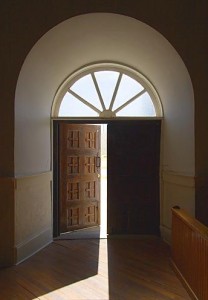 GWERU, Zimbabwe (ABP) – The principal of the Baptist Theological Seminary of Zimbabwe has been fired for refusing to accept changes made to the school’s governing documents including adherence to a Southern Baptist Convention faith statement that forbids women from serving as pastors.

Henry Mugabe says he received his termination letter after he concluded a sermon he preached at his church’s revival service on Saturday, July 2. According to a series of e-mails and scanned documents forwarded to Associated Baptist Press, the controversy stemmed from conditions for transfer of school property from the SBC International Mission Board to the Baptist Convention of Zimbabwe.

A spokesperson for the International Mission Board in Richmond, Va., said July 28 the IMB was not involved in the matter and referred questions to the seminary council of the Baptist Convention of Zimbabwe.

The official reason for Mugabe’s termination is insubordination, based in part on his refusal to meet with a new council formed by the Baptist convention to replace the seminary’s board of trustees. Mugabe, who is unrelated to Zimbabwe’s strongman president Robert Mugabe, said the dissolved board of trustees, not the convention, were his employers and he was under no obligation to attend a meeting he considered unconstitutional.

After locking Mugabe out of his office and giving him seven days to move from his home, owned by the Baptist Mission of Zimbabwe, convention officials reportedly froze assets for the seminary, blocking Mugabe from paying a 16-member staff and other seminary expenses.

The Alliance of Baptists, a progressive body in the United States that has supported the Baptist Seminary of Zimbabwe through its Bridges of Hope Mission Offering, wired a portion of the needed funds. Mary Andreolli, the group’s minister of outreach and communications, delivered the rest when she traveled to Zimbabwe for an on-site assessment in late June.

“Learning what I have learned about Henry’s situation and the Baptist Convention of Zimbabwe agencies the Alliance has supported in the past is both shocking and disheartening,” Andreolli told ABP in an e-mail interview from Zimbabwe. She faulted the International Mission Board for using assets to “manipulate impoverished people and systems in the name of global missions.”

The disciplinary hearings that Mugabe refused to attend centered on his decision to enter into a relationship with the University of Zimbabwe to provide teaching certificates for seminary graduates to help them supplement meager ministerial incomes in the impoverished nation.

Friends of Mugabe say the arrangement was never an issue before, and the convention leaders’ real motive was to change the school from an ecumenical seminary with students from a variety of denominations to an institution focused on granting master’s and doctor’s degrees to Baptist ministers in partnership with an SBC seminary in the United States.

Another issue, they say, is to guarantee that the Baptist Seminary of Zimbabwe shares theology with the SBC, including an article in the 2000 Baptist Faith and Message that dictates “while both men and women are gifted for service in the church, the office of pastor is limited to men as qualified by Scripture.”

A new seminary charter, drafted without input from Mugabe, requires all academic staff “to subscribe to the 2000 Baptist Faith and Message upheld by the Baptist Convention of Zimbabwe, IMB and the Southern Baptist Convention.”

A new mission statement describes the seminary as “dedicated and covenanted to biblically educate and train God-called men to be pastors and women to be auxiliary, spiritual leaders in other varied ministries.”

It amends a prohibition against non-discrimination in hiring or accepting students to add “with the exception of denominational affiliation” and names the president of the Baptist Convention of Zimbabwe as the seminary’s “official legal authority” and requires the principal to report to him.

Mugabe, who was first employed by the seminary in 1984 and named president in 1996, accused the convention of unfair labor practices for changing terms of his employment contract unilaterally. The convention president said since the convention elected the old board of trustees, it had a right to dissolve it without his approval. Mugabe’s lawyers are appealing the termination to Zimbabwe Labour Court.

Tom Graves, retired president of the Baptist Theological Seminary at Richmond, called Mugabe’s firing “a tragedy of epic proportions.” Mugabe has taught at BTSR as a visiting professor almost since the Virginia seminary’s opening in 1991 and stayed as a guest in Graves’ home during the month of January many of those years.

“Henry is one of the best-trained African theologians of any denomination and a recognized leader among Christian thinkers worldwide,” Graves said. His firing, Graves said, “may well serve the agenda of Southern Baptist fundamentalists, but it ill serves the future of Christian ministry in the nation of Zimbabwe.”

Gregg Fort, the IMB representative to conventions in Zimbabwe, said in one of the e-mails forwarded to ABP that it appeared the Zimbabwe Baptist Convention “does not want to walk further down the road towards an ecumenical school focused on students from a variety of church backgrounds nor defined by a relationship with the University of Zimbabwe.”

“I personally applaud the convention for pursuing a Kingdom vision of creating a sound conservative Baptist leadership base for ministry within and without Zimbabwe,” Fort said. He advised Mugabe that “one would need to search one’s soul, sense of calling and whether one can function within the confines of the established authority of the convention as it is currently led by its elected leadership.”