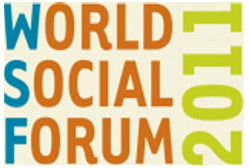 THEOLOGY IN LIBERATION PERSPECTIVE WILL ATTEND AT THE 2011 WORLD SOCIAL FORUM IN DAKAR, SENEGAL

The fourth edition of the World Forum on Theology and Liberation will be held on February 5 to 11, in Dakar, Senegal, during the 10th World Social Forum. In this edition, the WFTL will take part among initiatives of groups and social movements came from different world regions that shape out the WSF of a plural and collective process.

The WFTL will be present in Dakar with a group of 80 men and women theologians of different traditions and regions of the world, in order to contribute to this process since the relationship between spirituality and ethics, based on the dialogue between religious traditions and social practices.

The WFTL agenda will be methodologically marked by two moments: firstly, inserting in the WSF and, secondly, putting this experience under a theological discussion. The first moment will be carried through workshops addressed to the general public of the WSF. The topics should engage with thematic keys of the WSF as the following aspects:

Religions and peace Peoples’ knowledge and world ethic Muslim and Christianity Healing and liberation from Africa Feminism and liberation Religions, migration and liberation Capitalism and religion Theology and ecology “Negritude”, religion and liberation Crisis of civilization and religious experience Ecclesial base communities and liberation theologies today Universal Commonalities and spiritual resourcesIn a second moment, it will be held the Theological Seminar Preparation only with members of the delegation, aiming to deep closed issues to contemporary theological thought. These discussions will be pointed by intuitions which have been framing the WSF and even WFTL since last years, as well as by questions related to different contexts presented in the delegation.

The purpose is to recognize points of convergence in the midst of cultural and religious plurality in view of a planetary consciousness and at the same time a sensitivity to the particularities of each context and its protagonist.

WFTL’s delegation is still being formed. The group consists of participants from previous editions of WFTL and guests, significantly expanding the network that constitutes the WFTL. Since 2005, this one has been adding theological institutes and associations from all continents. Currently, it forms an extensive network of academic professionals, community leaders and activists interested in the issues raised in this process.