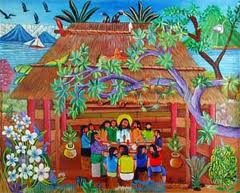 World Communion Sunday – celebrated the first Sunday in October – is one of the most venerable of “special Sundays.” The day has taken on new relevancy and depth of meaning in a world where globalization often has undermined peace and justice – and in a time when fear divides the peoples of God’s earth.  On this day we celebrate our oneness in Christ, the Prince of Peace, in the midst of the world we are called to serve – a world ever more in need of peacemaking.

The Department of Evangelism of the Federal Council of Churches (a predecessor body of the National Council of Churches) was first associated with World Wide Communion Sunday in 1940 when the department’s executive secretary, Jesse Bader, led in its extension to a number of churches throughout the world.

Today, efforts to promote World Communion Sunday are carried out by participating denominations, and several produce materials geared toward this observance.   Please contact your denomination’s national offices to inquire about the availability of such materials. Click below for a few examples of ways that denominations and congregations lift up World Communion Sunday. If you have other resources to suggest, send an e-mail and tell us about them.

Established in 1936, when the world was deeply fragmented by the conflict that would be later known as World War II, World Communion Sunday (originally called World Wide Communion Sunday) has been an observance to help Christians all over the world affirm their unity in Jesus Christ as it is expressed so beautifully at the Lord’s Table. Originating in the Presbyterian Church in 1936, the idea of World Communion Sunday was embraced and promoted by the Federal Council of Churches (now the National Council of Churches) in 1940. Other denominations, including the Christian Church (Disciples of Christ), began to join in this annual witness to Christian unity, which takes place on the first Sunday in October.

Those Christians who started World Communion Sunday saw the Table of the Lord as a place where the woundsinChristendom,manytheresultofabrutalwar,couldbegintofindhealing. AttheLord’sTable, Christians in all nations, of many ethnicities and languages, could remember their kinship in Christ and be encouraged to live more fully as brothers and sisters in God’s family. What a remarkable vision!

When I think of the context out of which the first World Communion Sunday was born, I cannot help but think of the Disciples identity statement, “We are Disciples of Christ, a movement for wholeness in a fragmented world. As part of the one body of Christ, we welcome all to the Lord’s Table as God has welcomed us.” As Disciples of Christ, our motivation is similar to those who originated World Communion Sunday. We believe, as Disciples, that the wholeness of our fragmented world is best achieved at the Lord’s Table, where we remember who God is and what God has done for us, and where we remember who we are to God and to one another as Christ’s followers. We are all family, unconditionally loved and bound together in our Lord Jesus Christ. As our movement – the Disciples of Christ movement – invites and welcomes others to Christ’s table, we will be agents of healing for the brokenness that continues to exist in the world.

As Disciples, we proclaim the message of unity at Christ’s Table every Sunday of the year, not just on World Communion Sunday. We gather with other Christians every Sunday and declare our oneness in Christ as we take our place at the Table of our Lord. There are many different approaches to the serving and partaking of communion. Different elements are used. Different liturgies exist for communion in

different churches. Communion is placed in a variety of positions in different orders of worship. But the message of God’s love for us, made known in Christ, is proclaimed boldly through our worship at the Table. It is this love that we proclaim at the Table that has the power to heal wounds, whether they are the wounds within our own spirits, within our families, within our communities, and between nations. God’s love makes us One. In my view, we are not being truly faithful in our worship unless we are proclaiming that message.

May we find joy in proclaiming that message with passion on World Communion Sunday and on all of the other Sundays of the year. Come to think of it, why be restricted to Sundays? Let us proclaim this good news every day that God gives us breath.