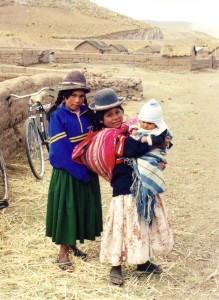 We’ve just come through a season when we focus a lot of attention on babies: the baby in the manger, toddlers on Santa’s knee, happy children around a Christmas tree.

We don’t often focus on a part of the original Christmas story, told in the Gospel of Matthew, about King Herod, who flew into a murderous rage because he couldn’t find the baby Jesus — a baby he feared would threaten his grip on power. Instead, we often sentimentalize and sanitize that first Christmas.

Herod’s brutal regime helped keep the peace – the kind of peace enforced not through justice but through terror and violence. He kept the rabble at bay, suppressing — as his sons would — Jewish messianic movements and anyone who threatened to upset his rule.

The story tells us that fearing for his reign, Herod ordered all the infant boys in the area around Bethlehem killed, prompting Matthew to quote the ancient prophet Jeremiah, “A voice was heard in Ramah, Rachel weeping for her children; she refused to be consoled, because they were no more.”

Theologian Stanley Hauerwas once said, “Perhaps no event in the gospel more determinatively challenges the sentimental depiction of Christmas than the death of these children. Jesus is born into a world in which children are killed, and continue to be killed, to protect the power of tyrants.

Today I’d like to tell you another story. Like the story of the first Christmas, it involves a poor family, a baby, love and hope. And, like the first Christmas story, it raises difficult and troubling questions for all of us to ponder. As you listen, consider:  Who is the Herod in this story, and why are babies dying?

The young parents Miguel and Patti attended my church in Bolivia, Light and Truth Presbyterian. Miguel’s father, Luis — the church’s pastor — was also my colleague in the Bolivian Joining Hands network.

In the weeks before baby Rebecca was born, Patti and Miguel told me they hoped their baby would grow up to go to college and become a professional. Pastor Luis’ hope was much simpler.    He wanted the baby to live.

Rebecca was born a month early and weighed less than 5 lbs., but she and her mother were sent home from the hospital the next day. She was tiny, and her skin was drawn tightly across her face. Like most Bolivians, Patti kept Rebecca wrapped very tightly, a bundle of soft, pastel blankets. Miguel often carried the baby against his chest, focusing intently on her during worship. But, Rebecca rarely opened her thin eyelids.

Rebecca’s mother and father diligently took her to the local public hospital each week where they would wait in line at dawn in the hope of seeing a doctor that day. But even though Rebecca never seemed to gain weight, the hospital staff sent her home each time with no new instructions or special dietary supplements.

And then one morning, she was gone.    She was three months old when she died.

When Pastor Luis called to tell me the news, his voice grew angry. The coroner had pronounced her dead of malnutrition. The diagnosis seemed like a terrible insult: they had loved that baby so much. They had tried so hard to keep her healthy. That afternoon, Patti and Miguel buried their daughter in a clandestine cemetery for poor people.

I don’t have any photos of Rebecca.

I thought I would have a chance to take her picture as she grew older. I was wrong.

But no one else was surprised by Rebecca’s death. Devastated. Sad. But not surprised. Families hope and pray, but no one expects a baby to live, like we do here in the U.S.

Luis tried to console his son and daughter-in-law. He reminded them, they were young, they could have more children. Luis and Lourdes had lost three children themselves – triplets he carried on his back to the hospital, as bullets flew overhead during one of Bolivia’s many dictatorships.

Every day in the third world, in countries like Bolivia, over 30,000 children under the age of five die from preventable diseases related to hunger and poverty.

The United Nations Development Program estimates that worldwide 15 million children die each year from diseases related to contaminated water. The number one cause of infant death in Bolivia is diarrhea.

Most of these deaths are avoidable, but too often the kinds of social and economic changes that are required to address them are politically unpopular because they demand more from us than mere charity.

I tell Rebecca’s story to bring home the kinds of numbing statistics we too often hear – to make the numbers personal.

But I also tell her story because sometimes it’s easier for people to talk about poverty when a baby is involved.  We are easily outraged at the death of an innocent like Rebecca.

The enormous challenge is to retain that sense of injustice when things get complicated.

And they do get complicated.

To understand why children like Rebecca die, you have to ask a lot of why questions.

Why are babies dying?

Because they get diarrhea.

Why? Because the water is contaminated.

You get the idea.

Once you finish asking why, you ask what must be done. Frequently the answer has to do with making systemic changes. And that’s when we get uncomfortable – or overwhelmed.

Don’t get me wrong. Charity is good. People have immediate, pressing needs and often we are in a position to reach out and address those needs. Charity – like giving food – is our generous gut response to deaths like Rebecca’s. But it doesn’t get at the deeper “Why” questions. It doesn’t address the root causes of deaths like hers. Frequently, the answer to those “Why” questions requires that we change political and economic systems. That is our best hope of saving children like Rebecca.

Herod lives; he is among us. The problem is he’s a whole lot harder to recognize when the sky isn’t full of angels. When we can’t point to an easily identifiable, brutal figure, to particular people with dastardly plans.

Is Herod a celebrated gold mining company polluting the water that children drink or a foreign smelting plant contaminating the air they breathe with lead? Is it a committee that recommends slashing funding for Medicaid? Or a political advisor who determines “acceptable” rates of collateral damage during bombing raids?

What if the people sitting on those committees or company boards aren’t evil people? What if they are good people who don’t look deeply at the effects of their decisions?

Who is Herod in Rebecca’s Story?

Understanding the context in which Rebecca died is complicated, messy. And infuriating.

Bolivia is not a poor country. It is an impoverished one. For 500 years, since the Spanish Conquest, Bolivia has provided the raw materials that generated enormous wealth in other countries. That is Bolivia’s history: Export raw materials, exploit natural resources and human beings.

During the 1980s and 1990s, the International Monetary Fund (IMF) and World Bank prevailed on Third World countries like Bolivia to institute economic austerity measures, slashing funding to services like health care and education and abruptly opening their economy to unfettered, free market forces.

When people like Bolivia’s president Evo Morales try to change those systems, they are often dismissed or vilified as too radical, threatening, or unsophisticated.

All the Rebeccas get lost in the debate.

Susan Moeller, a professor of media and international affairs, argues that when humanitarian crises turn complex, the public turns-off.   Moeller attributes “compassion fatigue” to complexity fatigue or “the appeal of self-evident, apolitical solutions.”

Slow death by poverty and preventable illness cannot arrest our attention like the images of destruction caused by tidal waves and earthquakes. And when earthquakes are followed by cholera outbreaks, political violence, and lengthy history lessons, we zone out.

Moeller’s research challenges us to reflect on our response. Hurricane Katrina brought home that we have problems of our own. And for a while people were asking some of those tough “why” questions about race and poverty in the U.S.

But in the midst of an economic crisis that has left many millions of Americans feeling vulnerable, it can be even more difficult to look beyond our own pain and to ask hard questions about our neighbors’ suffering – in the U.S. or abroad. It’s even more challenging when those questions don’t have neat answers or easily identifiable Herods – or when those questions implicate us and our nation’s policies.

But there is good news in the Bible story.

The Good News is that Jesus was not born into the kind of fairy tale world we have made of Christmas. He was born into a world like ours. A world in which babies like Rebecca and the children of Bethlehem die, and parents have to flee their homes so that their children can survive.

When the angel appears to Joseph he commands him to arise, using the Greek word egeiro (eg-i’-ro)]. Educator Jerry Goebel

has suggested that this word is best translated as “slapping someone from stupor.” The angel awakens Joseph from inaction. And just as the Angel of the Lord commands Joseph to awaken, to arise, and to get that baby to safety, the story shakes us out of our Christmas slumber. It shakes us awake from the comfortable, sanitized Christmas stories to which we’ve all grown accustomed.

Bolivia’s indigenous people have a concept called “Pachacuti” or the world turned upside down. The Good News of Jesus is a kind of Pachacuti: against the peace of men like Herod, the infant Jesus embodied the peace of God.

The baby born that night grew into a man who would accompany the misfit, the outcast, and ordinary people in the midst of suffering and grief. But the biblical story also tells us that the baby grew into a man who followed a great tradition of prophets who called on the Hebrew people to recognize when they had broken their contract with God — a contract demanding that God’s people act for justice and care for the least, the vulnerable, and the oppressed.

God commands us to listen to the world around us, to ask questions, and to act. The reality of the world into which Jesus was born – and into which children like Rebecca are born every day – is often dirty, ugly, and painful, full of discrimination and injustice. Sometimes we learn – much to our own dismay – that we are part of the problem.

But the good news in this story is that we should not despair: when God tells us to arise, God also tells us where to go.

But in order to be faithful, we do have to ask them.

And when we do, the good news is we won’t be alone. For the prophet said that the infant would be called “Emmanuel,” God is with us.

Finally, I am indebted to Joy Caroll Wallis’ sermon, “Putting Herod back into Christmas” (2004), for her reflection on the dangers of a purely sentimental Christmas erasing Herod – and the violent reality into which Jesus was born – from the story. Available on www.sojo.net

Susan Ellison is a former PCUSA mission co-worker in Bolivia (2001-2005) and is a PhD candidate in socio-cultural anthropology at Brown University. She is currently conducting dissertation research in El Alto, Bolivia. She can be reached at: susanhellison@gmail.com