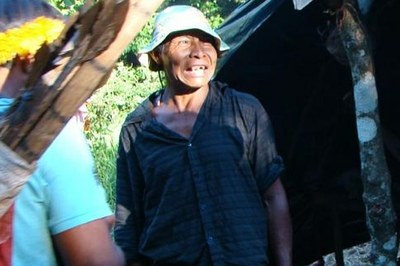 An indigenous leader in southern Brazil has been shot dead in front of his community, officials say.

Nisio Gomes, 59, was part of a Guarani Kaiowa group that returned to their ancestral land at the start of this month after being evicted by ranchers.

He was killed by a group of around 40 masked gunmen who burst into the camp.

Brazil’s Human Rights Secretary condemned the murder as “part of systematic violence against indigenous people in the region”.

In a statement, Human Rights Minister Maria do Rosario Nunes said the region in Mato Grosso do Sul state was “one of the worst scenes of conflict between indigenous people and ranchers in the country”.

She said those responsible must not be allowed to escape with impunity.

Mr Gomes was shot in the head, chest, arms and legs and his body was then driven away by the gunmen, community members said.

His son was reportedly beaten and shot with a rubber bullet when he tried to intervene.

Unconfirmed reports say two other Guaranis were abducted by the gunmen and may also have been killed.

The incident happened near the town of Amambai near the border with Paraguay.

Federal Police and representatives of Brazil’s main indigenous organisations have travelled to the area to investigate the killing.

“The people will stay in the camp, we will all die here together. We are not going to leave our ancestral land,” one of the Guaranis told the Roman Catholic Indigenous Missionary Council (CIMI) .

CIMI said the community wanted to recover Mr Gomes’s body so he could be buried in the land he tried to defend throughout his life.

The group had been camping on a roadside following their eviction until they decided to return to their land at the beginning of November.

The killing has been condemned by the campaign group Survival International, which campaigns for indigenous rights.

“This level of violence was commonplace in the past and it resulted in the extinction of thousands of tribes,” he added.

The Guarani are Brazil’s largest indigenous minority, with around 46,000 members living in seven states.

Many others live in neighbouring Paraguay, Bolivia and Argentina.

The group suffers from a severe shortage of land in Brazil, which has worsened as a boom in agriculture has led farmers and ranchers to extend their holdings.

Indigenous activists say farmers in Mato Grosso do Sul frequently use violence and threats to force them off their ancestral territory, and that the local authorities do little to protect them.