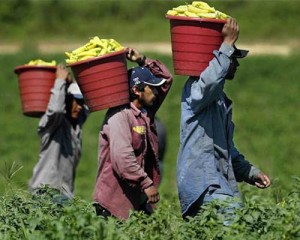 Advocacy is hard work and no one knows that better than the members of theCoalition of Immokalee Workers (CIW).  After all, how often does an activist group demand change from big-name food establishments — and win?  The modern-day David has met his Goliath. Over the last two decades the CIW has been demanding that our nation’s major food producers and distributors uphold fair labor practices by ensuring that the working conditions and wages of field laborers is improved. The initiative, called the Campaign for Fair Food, has called on such big names as Burger King, Subway, and Whole Foods to support and purchase from farms that uphold fair labor practices and to investigate and hold accountable those that don’t.

The coalition is made up of thousands of mainly Latino, Haitian, and Mayan Indian immigrants from across the state of Florida who work low-wage jobs. The community-based organization works to ensure better wages for workers, respect from employers, stronger laws and enforcement against those employers who violate human rights laws, the abolition of forced labor in fields, the right to organize workers and improved, more affordable housing.

Two major initiatives have been launched in the CIW’s young life: an anti-slavery campaign and the Campaign for Fair Food.  The latter began in 2001 and has been gaining ground ever since.  The first major victory came in March 2005 when Taco Bell agreed to raise the wages and improve the working conditions for Floridian laborers supplying their tomatoes. This historic agreement solidified CIW’s place in the human rights fight, gaining respect from such prominent groups as the Congressional Hispanic Caucus: “This is a truly historic agreement, marking perhaps the single greatest advance for farmworkers since the early struggles of the United Farm Workers.  To the workers and organizers of CIW, we express our deepest gratitude for their determined work for their own dignity and their historic contribution to advancing the cause of labor rights.”

The CIW’s work in the Campaign for Fair Food, as well as anti-slavery initiatives, has won them many accolades including the Robert F. Kennedy Human Rights Award and the Salem Award for Human Rights and Social Justice. However, the coalition is not working for accolades. There is too much at stake to dwell on victories; there is still much to be accomplished in the fight for fair food practices and for this the CIW continues to pressure our major food suppliers.  The members of the CIW not only know where our nation’s food comes from, they grow it.  They not only know what working conditions in the fields are like, they spend every day surviving them. And the members of the Coalition of Immokalee Workers not only speak for justice, they live it.