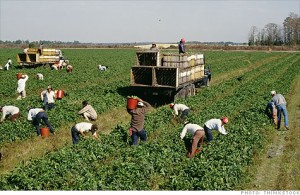 I motion that we simply stop eating fruits and vegetables. That’s right: No more apples, oranges, carrots, potatoes or anything of the sort. Salad is a definite no. Given the current injustice in the agricultural system, the hidden human costs for workers, the health risks, and the oppression tied up in every bundle of greens or grapes that we consume, we should just cut fresh produce out of our diets.

But alas, unless Americans stop eating produce, we will continue to be faced with the reality that more than one million exploited workers pay a very high price to put food on our tables. Supporting the nation’s ever-increasing demand for fresh produce requires an agricultural workforce of 2.5 million people, almost half of whom are undocumented immigrants. Undocumented farmworkers often suffer abuses which would be unheard of in other industries, but they are unable to report exploitation for fear of being deported. Stories of pesticide-induced diseases, heat stroke, and rampant poverty are common in the agricultural industry, but are not often mentioned to the general public. Worst of all, most of us enjoy the fruits of migrant workers’ labor, and yet simultaneously turn a deaf ear to their cries of injustice.

Fortunately, an answer to these cries has been proposed in the form of the Agricultural Job Opportunities, Benefits and Security Act (AgJOBS). This bill would create a pilot program whereby certain immigrant farmworkers could obtain a temporary work permit called a “blue card.” Undocumented agricultural workers would be eligible for the card if they have worked 150 days in the farming industry in the previous two years.

Upon receiving a blue card, farmworkers would be required to work in agriculture for three to five years before becoming eligible to apply for a green card and become legal residents. Under the AgJOBS bill, immigrants would only be eligible for a green card if they pay a $500 fine, have paid all taxes, and are free of serious criminal convictions.

This AgJOBS bill has the potential to remedy the perennial shortage of agriculture workers in the United States. On a more basic level, granting immigrants the opportunity to work in our fields legally would bring millions of farmworkers out of the shadows and grant these workers the dignity they deserve.

The injustice of immigrant farm workers is an issue serious enough to evoke gravitas even from Comedy Central’s Steven Colbert. In his statements to the congressional subcommittee on September 24, 2010, Colbert broke from his usual caricatured persona to advocate for the AgJOBS bill. He pointed out that migrant workers are “the least of these” in our country and they “have no rights.”

Colbert’s quotation of Jesus’ words are a poignant reminder to all of us that we are called to care for those who are invisible to our society. AgJOBS brings these invisible workers into the light, grants them opportunity and confirms their right to human dignity which all God’s children share.

So if we won’t stop purchasing fruits and vegetables, let’s make a concerted effort to pray and advocate for those who labor to provide us with food. It is our duty to remind Congress that we care deeply about our brothers and sisters in the fields who are the least of these.

Andrew Simpson is a policy and organizing intern at Sojourners.