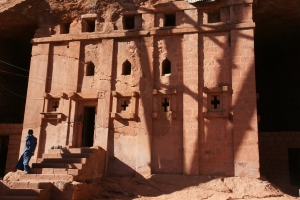 When people in the United States think of “the Middle Ages,” chances are they think of Europe. But people lived everywhere on the globe during the centuries thought of as medieval (roughly the 5th to the 15th centuries CE). In Ethiopia, the fortunes of the Christian Aksumite Empire, and its successor Zagwe dynasty, intersected with the lives of two remarkable women — about whom almost nothing seems to be known with certainty.

History knows that in the late 10th century CE a woman warrior, Godit(alternatively, Yodit, Gudit, Judith, or colloquially Isat), led the raids on the forces of the waning Aksumite Empire that brought it to a definitive end. One source identifies her as the founder of the Zagwe dynasty. It is clear that she was not Christian; some sources suggest she may have had ties to the ancient Falasha, or Jewish, Ethiopian community; what is unclear is whether her opposition to the Aksumites stemmed from this religious difference, or had some other origin.

Over time, however, the Zagwe dynasty returned to Christianity. Late in the Zagwe period, in the last years of the 12th century and the first years of the 13th century, the ruler Gebre-Masqal and wife Masqal-Kabra undertook a massive architectural project that now ranks as one of the wonders of the world: the rock-hewn churches of Adefa (later known as Lalibela, after one of the epithets of the king).

Masqal-Kabra reportedly exerted sufficient political influence to have had her brother Hirun ordained as bishop (a canonical source documents an ecclesiastical dispute over alleging the bishop’s bad behavior, which proved false; the pious bishop never left his hous except to perform mass), and to have persuaded her husband to abdicate for a time in favor of his nephew Naakweto La-ab, and then, after reports of gross injustice in Naakweto’s administration (soldiers reportedly appropriated a poor farmer’s only cow) to have insisted that Gebre-Masqal take up the crown once more. She is also reportedly the sole patron of one of the rock-hewn churches, Bet Abba Libanos, said to have been built as a memorial to her husband after his death in 1230 CE.

Attestations in every case are less secure than sometimes reported — which may be one of the central lessons these remarkable women have to teach. History is not just a process of memory, but of valued and protected memory. It preserves best what power chooses to remember, and what tenacity refuses to let go. That process has not been particularly kind to women, nor even — despite tenacious efforts by a long-lived dynastic leadership — to Ethiopia. A genuine celebration of diversity includes the celebration of memory . . . the insight behind Women’s History Month.

In the Dictionary of African Christian Biography on Gudit and Masqal-Kebra — in the biographies of her husband Lalibala, her brother Hirun, and her nephew Naakweto La-ab

In Ethiopia on Godit