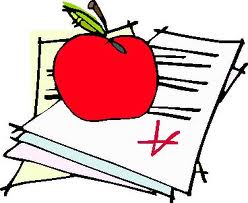 Stage I begins in benign resentment. You’re determined, this time, not to let those 80 term papers and final exams destroy you. It won’t be like the last grading marathon at semester’s end. You will stay in charge. You have 800 pages to grade, 400 on American Drama and 400 on Literary Theory. You take out your purple grading pen.

“Power serves as an overhanging subconscious,” says the first sentence. You experience your first twinges of pain. But it’s mild, still mild. You can still giggle at the assertion that “we adopt our social roles in order to panda to society.” You picture your social role—your teacher persona—as a black-and-white herbivore performing in a zoo for a crowd of unruly students. Then a character in a play you read this semester, you learn, suffers from “post-dramatic stress disorder.” He’s also in a “post-depressive state.” You’re still pre-, but barely.

Read the 3 other stages here:  http://www.mcsweeneys.net/articles/the-stages-of-grading
By Cláudio Carvalhaes | April 23, 2012 | BLOG | No Comments |