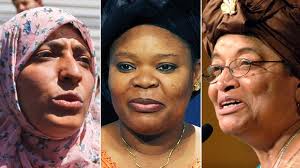 The Nobel Peace Prize 2011 was awarded jointly to Ellen Johnson Sirleaf, Leymah Gbowee and Tawakkul Karman “for their non-violent struggle for the safety of women and for women’s rights to full participation in peace-building work”.

Ellen Johnson Sirleaf is the 24th President of Liberia and the first elected female Head of State in Africa. Throughout her career she has demonstrated passionate commitment to hard work, integrity and good governance, advocating for the rights of women and the importance of education to provide a better future for her country and its people.

Born Ellen Euphemia Johnson in Monrovia on October 29, 1938, she is the granddaughter of a traditional chief of renown in western Liberia and a market woman from the southeast. She grew up in Liberia and attended high school at the College of West Africa in Monrovia, subsequently studying at Madison Business College, the University of Colorado and Harvard University’s Kennedy School of Government where she obtained a Master’s Degree in Public Administration in 1971.

Her entry into politics came in 1972 when she delivered her now famous commencement address to her high school alma mater in which she sharply criticized the government, showing her determination to speak truth unto power. This was the start of a distinguished professional and political career spanning nearly four decades.

In 1965 she joined the then Treasury Department in Liberia and was appointed Minister of Finance in 1979 where she introduced measures to curb the mismanagement of government finances. After the military coup d’état of 1980, Johnson Sirleaf served as President of the Liberian Bank for Development and Investment (LBDI) but fled Liberia and the increasingly suppressive military government that same year. She traveled to Kenya and served as Vice President of CITICORP’s Africa Regional Office in Nairobi, and later moved to Washington, D.C. to assume the position of Senior Loan Officer at the World Bank, and Vice President for Equator Bank. In 1992 she joined the United Nations Development Programme (UNDP) as Assistant Administrator and Director of its Regional Bureau of Africa with the rank of Assistant Secretary-General of the United Nations.

However, with her country still very much at heart, Johnson Sirleaf resigned in 1997 to return home and contest the Presidential elections and was ranked second in votes to warlord Charles Taylor. She was exiled again, this time to the Ivory Coast where she kept a close eye on Liberian politics. During that time she established, in Abidjan, Kormah Development and Investment Corporation, a venture capital vehicle for African entrepreneurs, and Measuagoon, a Liberian community development NGO.

In 2003 when Charles Taylor was exiled to Nigeria and the National Transitional Government of Liberia (NTGL) was formed, Johnson Sirleaf was selected to serve as Chairperson of the Governance Reform Commission where she led the country’s anti-corruption reform by changing the reporting mechanism of the General Auditing Commission from the Executive to the Legislature thereby strengthening and reinforcing its independence. She resigned this position to successfully contest the 2005 Presidential elections, resulting in her historic inauguration, on January 16, 2006, as President of Liberia.

After decades of fighting for freedom, justice and equality in Liberia, President Ellen Johnson Sirleaf has spent more than four years rebuilding post-conflict Liberia. She has revived national hope by strengthening the institutions of national security and good governance, leading the revitalization of the national economy and infrastructure, including the construction of more than 800 miles of roads, and restoring Liberia’s international reputation and credibility.

President Johnson Sirleaf has built strong relations with regional partners and the international community, attracting investment of over $16 billion in Liberia’s mining, agriculture and forestry sectors, and off-shore oil exploration to provide jobs for her people. Her leadership has led to more than $4 billion in debt relief in June 2010 and to the lifting of UN trade sanctions to allow Liberia access to the international market. She has increased the national budget from $80 million in 2006 to more than $350 million in 2010 and has driven annual GDP growth at between 5 and 9.5 percent over this period.

The Liberian leader has attracted more than $5 million of private resources from international contributions, which she has used to enhance Government’s ability to rebuild vital infrastructure – to build schools and clinics and markets, and to foster scholarships to further build the skills and capabilities of the Liberian people.

President Johnson Sirleaf currently serves as Chairperson of the Mano River Union where she leads the effort for political stability and economic cooperation among Sierra Leone, Guinea, Liberia and Côte d’Ivoire. She was a founding member of the International Institute for Women in Political Leadership, was designated in 1999 by the OAU to serve on the committee to investigate the Rwanda genocide, was a Commission Chair for the Inter-Congolese Dialogue, and was selected by UNIFEM as one of two persons to investigate and report on the effect of conflict on women and women’s roles in peace building.

Before her ascendancy to the Presidency, Ellen Johnson Sirleaf served on many advisory boards, including the International Crisis Group (USA) and Women Waging Peace (USA), and she is the recipient of numerous prestigious awards, among them: the FAO CERES Medal (2008); the Crisis Group Fred Cuny Award for the Prevention of Deadly Crisis (2008) for outstanding leadership in democracy, development and peace building in Africa; and the Presidential Medal of Freedom (2007), the highest civilian honor bestowed by an American president. Special honors received include Commander de l’Ordre du Mono (1996), Togo’s highest national honor; the Franklin D. Roosevelt Freedom of Speech Award (1988); and the 2010 Friend of the Media Award from the African Editors’ Union, in recognition of her contribution to a media-friendly environment in Liberia throughout her  tenure as President. She has also received Honorary Doctorate degrees from fourteen universities in the United States and Africa.

In 2010, Newsweek magazine listed Johnson Sirleaf as one of the ten best leaders in the world, Time placed her among the top ten female leaders, and The Economist called her “the best President the country has ever had.”

President Johnson Sirleaf has written widely on financial, development and human rights issues, and in 2008 she published her critically acclaimed memoir, “This Child Will Be Great”.

Ellen Johnson Sirleaf is the proud mother of four sons and grandmother of eleven.

“… the world has not been functioning well without the input, in every sphere, of women.”

[Adam Smith] Hello. May I speak to Leymah Gbowee please?

[AS] Oh, hello! My name’s Adam Smith. I’m calling from the official website of the Nobel Prize in Stockholm, Sweden.

[AS] … Congratulations on the award.

[JG] Thank you, sir. Thank you very much.

[AS]  Thank you, it’s wonderful news. We have a tradition of recording just tiny interviews on the telephone with new Laureates. Would you speak to me for just two minutes?

[AS]  Thank you. May I ask what message you hope this prize sends to the world?

[AS]  That’s a wonderful message, thank you. And may I ask, when you were protesting for the end of the civil war in Liberia, armed with only white t-shirts, what gave you hope that you would succeed?

[JG] My hope was in those women who came on a daily basis – women who had been broken, women who had been abused, who had watched or observed the worst – their commitment, their perseverance, their passion for bringing peace to Liberia, that was my hope.

[AS] Thank you for speaking to us and congratulations again.

a Yemeni journalist and activist, is one of three women awarded the 2011 Nobel Peace Prize. She becomes the first Arab woman to win the prize.

The 32-year-old mother of three founded Women Journalists Without Chains in 2005.

She has been a prominent activist and advocate of human rights and freedom of expression for the last five years, and led regular protests and sit-ins calling for the release of political prisoners.

The Norwegian Nobel Committee cited Ms Karman and the two other winners for their “non-violent struggle for the safety of women and for women’s rights to full participation in peace-building work”.

The Nobel jury specifically lauded Ms Karman for playing, “in the most trying circumstances, both before and during the Arab Spring… a leading part in the struggle for women’s rights and for democracy and peace in Yemen.”

Ms Karman told the BBC Arabic Service: “I’m so happy with the news of this prize and I dedicate it to all the martyrs and wounded of the Arab Spring… in Tunisia, Egypt, Yemen, Libya and Syria and to all the free people who are fighting for their rights and freedoms.

“Actually I didn’t know I was nominated for the Nobel Peace Prize until now. I only knew about it through BBC Arabic and al-Jazeera, so thank you very much.”

In comments to the AFP news agency she said that the prize was “a recognition by the international community of the Yemeni revolution and its inevitable victory”.

Ms Karman has led rallies in the continuing protests against the rule of President Ali-Abdullah Saleh.

Speaking to the BBC in April 2011 in Change Square in Sanaa, the heart of the popular demonstrations against Mr Saleh, Ms Karman said she was astonished at the protests: “I could never imagine this. In Yemen, women are not allowed out of the house after 7pm, now they are sleeping here. This goes beyond the wildest dream I have ever dreamt, I am so proud of our women.”

She is a member of Yemen’s leading Islamist opposition party, the Islah – a conservative, religious movement that calls for reform in accordance with Islamic principles.

She has campaigned to raise the minimum age at which women can marry in Yemen.

She has been jailed several times for her activism, pilloried in the official media and attacked. Unusually for a woman in Yemen, Ms Kamran wears a headscarf not a full face veil.