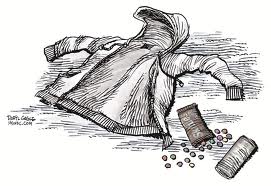 Symbols have long been important for religious and spiritual reflection. These symbols have been employed to provide greater understanding to transcendent truths, to provide comfort amid chaos, and to inspire the faithful to put their faith to action towards the common good. Many times, these symbols have emerged from rather mundane objects closely associated with a historical event.

Prior to the beginning of his passion, Christ blessed and broke bread as a symbol of his soon to be battered and bruised body. He blessed and poured wine as a symbol of his blood which was soon to pour from open wounds. These rather ordinary objects, bread and wine, are symbols that remain central to Christian worship in celebrating the Eucharist today.

And that wooden Roman instrument of public execution, the cross, has emerged as the primary symbol of the Christian faith. I have always wondered how baffling and unnerving it would be for a first-century Roman citizen to see a known instrument of death now adorned with gold and jewels and adorning countless necks while also on display in houses of worship and within our homes. Yet, the cross, as a symbol, now transcends Roman execution and is widely held as a symbol of victory.

Considering the brutal murder of 17-year-old Trayvon Martin, three rather mundane objects have emerged as greater symbols towards reflecting on the historic and on-going persecution of Black masculinity in America and towards a newly-energized movement to end it: Skittles, iced tea, and the hoodie. It has been widely reported that as he was being followed that fateful night, Trayvon covered his head with his hoodie to conceal himself from his pursuer. Unarmed, much also has been mentioned of Trayvon’s sole possessions, a single bag of Skittles and a can of iced tea.

Since Trayvon’s death, thousands have marched in protest themselves donning hoodies, and thousands more have posted, shared, and tweeted photos of the same throughout social media. Bags of Skittles have been mailed by protesters to authorities and have been creatively incorporated into signs of protest. Iced tea has remained central in our discourse and dialogue on the tragedy. But what do Skittles, iced tea and the hoodie now symbolize? What greater meaning do they possess? How can these objects form a new liturgy, not only for reflecting upon the life and death of Trayvon Martin, but for all who seek to “do justly, love mercy, and walk humbly before God” (Micah 6:8)? I humbly propose the following:

Skittles possess a hard, sugary shell manifested in a multiplicity of flavors and colors, held together in a single package. The liturgy of Trayvon Martin inspires us to rid our nation of systemic racism and consider that although, like Skittles, we Americans come in a multiplicity of “flavors” (read preferences) and colors we are still held together in unity in the single-packaging of being created in the image of God. It is forever true that each of us has been endowed by the Creator with the right to life, liberty, and the pursuit of happiness.

Sweetened iced tea, a staple of Southern culture, refreshes the parched palate. Tea, however, does not originally emerge in sweetened form. Its sweetness is the result of an intentional action to remove its bitterness. The liturgy of Trayvon Martin reminds us that in our quest for justice against all forms of injustice and prejudice we must remain sweet, not bitter, lest we become what we oppose. This will take intentionality on our part, for it is easy to confuse revenge with justice. We do no justice to Trayvon’s memory by likewise embodying the bitter racism that took his life.

The hoodie, that hooded sweatshirt of particular popularity within urban America, was first designed by Champion in the 1930s to provide warmth to workers who had to endure freezing temperatures. As such, the hoodie shielded them from the bitter cold, thus giving them the warmth needed to endure the biting elements around them. The liturgy of Trayvon Martin reminds us that the season of our fight against injustice may turn bitterly cold, but we must remain resolute and hooded in our commitment that we not grow “weary in well-doing” (Galatians 6:9) and endure to the end.

Let Skittles, iced tea, and the hoodie become symbols of truth, inspiration and comfort for a new generation of protesters against the on-going crucifixion of innocent flesh at the hands of a corrupt system of oppression and marginalization that has for too long tortured the masses and tainted our country’s legacy.

This piece was originally published by Rev. Waters on Huffington Post Religion