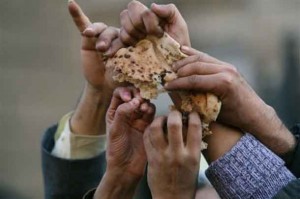 It’s real, and it’s not going away anytime soon.

As the new year begins, the price of wheat is setting an all-time high in the United Kingdom. Food riots are spreading across Algeria. Russia is importing grain to sustain its cattle herds until spring grazing begins. India is wrestling with an 18-percent annual food inflation rate, sparking protests. China is looking abroad for potentially massive quantities of wheat and corn. The Mexican government is buying corn futures to avoid unmanageable tortilla price rises. And on January 5, the U.N. Food and Agricultural organization announced that its food price index for December hit an all-time high.

But whereas in years past, it’s been weather that has caused a spike in commodities prices, now it’s trends on both sides of the food supply/demand equation that are driving up prices. On the demand side, the culprits are population growth, rising affluence, and the use of grain to fuel cars. On the supply side: soil erosion, aquifer depletion, the loss of cropland to nonfarm uses, the diversion of irrigation water to cities, the plateauing of crop yields in agriculturally advanced countries, and — due to climate change — crop-withering heat waves and melting mountain glaciers and ice sheets. These climate-related trends seem destined to take a far greater toll in the future.

There’s at least a glimmer of good news on the demand side: World population growth, which peaked at 2 percent per year around 1970, dropped below 1.2 percent per year in 2010. But because the world population has nearly doubled since 1970, we are still adding 80 million people each year. Tonight, there will be 219,000 additional mouths to feed at the dinner table, and many of them will be greeted with empty plates. Another 219,000 will join us tomorrow night. At some point, this relentless growth begins to tax both the skills of farmers and the limits of the earth’s land and water resources.

Beyond population growth, there are now some 3 billion people moving up the food chain, eating greater quantities of grain-intensive livestock and poultry products. The rise in meat, milk, and egg consumption in fast-growing developing countries has no precedent. Total meat consumption in China today is already nearly double that in the United States.