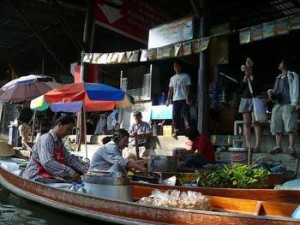 One of the gifts of inter-religious dialogue today is awareness of one another’s beliefs, wisdom, and spiritualities. In this week’s reflection by Prof. Dr Seong-Won Park, the Korean theologian introduces us to a foundational Asian spiritual tradition’s teaching on water.

One can say that this week’s reflection actually is not “on water”. It rather uses water and its spiritual attributes as a starting point to reflect on the values and the principles that should be embodied in our relationship with the earth and within the human community.

A reflection by Seong-Won Park

(From the Daode jing by Laotzu)

The significance of water in Christian spirituality is enhanced by the teachings, spiritualities and practices around water in other religious traditions. For instance, Christians in Asian cultures have received rich insights about water from Taoism. In Taoism, water and its characteristics are regarded as symbols and representations of the highest value, namely “goodness” itself. In chapter 8 of the Daode jing by Laotzu (approx. 604-531 BCE), water is described as providing invaluable wisdom for life.

From the characteristics and the nature of water as described in the Daode jing, we can extract a number of principles which inspire an alternative vision for a life-giving and just economy, an economy of water:

Beneficial to all: The first virtue of water that the Wisdom affirms is that the value in water (goodness) benefits all things. Water benefits all without exception. Water goes everywhere. It is “giving” in nature – not keeping itself for itself. Neo-liberal economic globalization benefits only a few while the majority is excluded. The economy should benefit all without exception.

Non-competition: Highlighted as the second important aspect in the nature of water is that it “does not compete”. When it faces a rock, it does not go through the rock. It goes around the rock and flows smoothly towards its destination. Cooperation, mutuality and adaptation are much more helpful than competition in a life-giving economy.

Continual flow: The very nature of water is to “keep flowing”. The Latin word for “to run” in English is currere, from where the word “currency” came. The currency or money should continue to flow and circulate, not being accumulated in the hands of a few but reaching every corner and all people in society.

Flowing down and filling from the bottom: “It stays in places that others disdain.” Water always flows from the higher to the lower level. It never stays in the upper part of a vessel when the bottom is empty, but starts to fill the bottom first. The bottom and the basis are the first place where water makes an investment, very unlike the “trickle-down” logic of the neo-liberal market economy. Taoist wisdom says, “and it therefore is close to the Tao”. The fundamental nature of Tao is to be with the lowest. This characteristic of water also reminds us of God’s preferential option for the poor.

Justice and equilibrium: Water never lets injustice and inequality become perpetual but strives for equilibrium. Whatever form the bottom may have, water evens out the differences.

Stability and inclusiveness: “The value (goodness) in a mind is depth.” The deeper the water is, the more stable it is. The economy of the poorest countries is always unstable because of lack of economic depth.

Benevolence: Water never keeps water for itself. Water exists for giving to others. Mutual “giving” is the very nature of economy. If an economy cannot give what is necessary for those in need, that economy does not serve life.

Transparency: Water is honest and transparent. When not polluted, it is colour-free and taste-free. This nature of transparency and neutrality should be a principle for the economy as well.

Timeliness: Water is needed at the time when people, animals and plants are thirsting. Such timeliness is also important in economic life. Salaries and food should be available on time. Debt cancellation should be made on time. Economic panic comes when funds are not available on time.

Satisfaction of enough and danger of too much and too little: One of the most serious dangers of water is the danger of “too much” or “too little.” When there is too much, water causes floods. When there is too little, it causes drought. In today’s economy and many people’s life-style, the compulsion to go beyond limits (over-eating, over-production, over-consumption, over-investment, over-indebtedness, limitless growth, limitless development, limitless greed etc.) is a major problem. Time has come to transform the “over-” and “limitless” life-style into a life-style of “enough” or even “kenosis”.

Economy and ecology both stem from the Greek word “oikos”, meaning household or family. A fundamental principle of a household economy is to be beneficial to all members of a family. Nobody is excluded from the benefit. Often the most vulnerable members of the family are the first beneficiaries, before anyone else in the family. The household economy puts priority on basic needs like food, water, health, education, housing, clothing, cultural activities, and so on. Only after the basic needs are met, is there a possibility for investment or other activities. In a well functioning household, family members do not compete but assist each other.

There is another important economic slogan in Taoism: “Unite the wealth, you divide the people. Divide the wealth, you unite the people.” In combination with the teaching on water, can’t this wisdom inspire our thinking as we search for alternatives to a neo-liberal economic globalization which attempts to unite the world markets, but results in fact in dividing the whole world including creation?

The Rev. Dr Seong-Won Park teaches theology at Youngnam Theological University in Daegu, South Korea. He is a member of the World Council of Churches Central Committee, and a moderator of the Oikotree Movement.