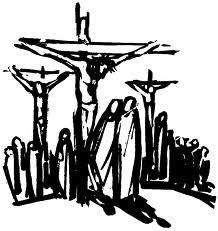 The Communal Crucifixion of Jesus

The Jewish historian Josephus, the Roman historian Tacitus, and the Christian Apostles’ Creed have very little in common. Except for this one thing: that, respectively, Jesus “had undergone the death penalty in the reign of Tiberius, by sentence of the procurator Pontius Pilatus”; that “Pilate, upon hearing him accused by men of the highest standing amongst us, had condemned him to be crucified”; and that Jesus “suffered under Pontius Pilate [and] was crucified.”

Pontius Pilate was the Roman governor of Judea and, appointed by the emperor Tiberius, he ruled from 26 to 36 C.E. He and the Jewish high priest Caiaphas collaborated not wisely but too well and they were both eventually removed from office by their Roman masters. Jesus’ execution is as historically certain as any ancient event can ever be but what about all those very specific details that fill out the story? Are they fact or fiction and, if fiction, what is their purpose, intention, meaning?
Think about these examples and, in every case, notice how each one creates an echo or resonance with earlier biblical tradition. The most striking one is the death-cry of Jesus, “My God, my God, why have you forsaken me?” in Mark 15:34 that recalls the opening verse, “My God, my God, why have you forsaken me?” of Psalm 22:1. That recall is left implicit and, if you miss it, you miss it. It is neither proof nor argument but an invitation to thought and a lure for meditation.

Jesus’ death-cry as psalm-echo draws attention to further echoes between details of the crucifixion and verses of that same Psalm 22. Here are three examples from Mark, the earliest of the four gospels. Notice that they are all implicit — if you miss them, you miss them. They are there — but quietly, like choral music in the background — for those with ears to hear and hearts to understand.

A first example is the fate of Jesus’ clothes. “They crucified him,” says Mark 15:24, “and divided his clothes among them, casting lots to decide what each should take.” That echoes the verse, “they divide my clothes among themselves, and for my clothing they cast lots” from Psalm 22:18.

A second example is that, alongside Jesus, “they crucified two bandits, one on his right and one on his left” in Mark 15:27. That echoes the psalm’s lament that “a company of evildoers encircles me” in Psalm 22:16b.

A third example is these mocking challenges directed at Jesus: “Those who passed by derided him, shaking their heads and saying … ‘Save yourself, and come down from the cross!’ … ‘He saved others; he cannot save himself.’ … ‘Let the Messiah, the King of Israel, come down from the cross now, so that we may see and believe'” in Mark 15:29-32. In the background, hear once again, this taunt: “All who see me mock at me; they make mouths at me, they shake their heads; ‘Commit your cause to the Lord; let him deliver — let him rescue the one in whom he delights!'” from Psalm 22:7-8. But, once again, the echo is only implicit — if you miss it, you miss it.

Furthermore, apart from that Psalm 22, there is a clear (but, once again, implicit) allusion to another psalm during the crucifixion of Jesus. Unlike those preceding examples, all four evangelists contain this striking — and doubled — reference. Here is an example from Matthew’s gospel: “They offered him wine to drink, mixed with gall; but when he tasted it, he would not drink it … At once one of them ran and got a sponge, filled it with sour wine, put it on a stick, and gave it to him to drink” (27:34,48) That reminds one of this half-verse, “for my thirst they gave me vinegar to drink” from Psalm 69:21b.

Those are only a few examples but, from start to finish, in larger and smaller chunks of text, the last hours of Jesus resonate repeatedly with prayers and stories from the biblical tradition that preceded them. How is that “coincidence” to be explained?

My proposal is that multiple details about the death of Jesus were deliberately created but not just at random as mere narrative fill-up. They were created to describe Jesus’ death amid a tissue of resonances and a volley of echoes from the biblical past. Further, it is especially from the biblical psalms of lament, from the prayers of the just and righteous suffering injustice and oppression, that those details have been taken. In other words, the evangelists have created communal and corporate rather than just individual and private sufferings for Jesus. Starting from the historical basis of imperial indicting, flogging, and crucifixion, those manifold details — for example, the death-cry, the divided garments, the mockery, and the bitter drink — were invented and added within the ongoing tradition about Jesus. But why?

Because of this. Jesus was not the first faithful Jew who died on a Roman cross outside Jerusalem — nor would he be the last. In 4 B.C.E., Varus crucified two thousand Jews there, and in 70 C.E. Titus crucified five hundred a day — for how many days? Those first followers of Jesus were Christian Jews,” that is “Messianic Jews.” They believed that Jesus was their awaited Messiah, their expected Christ. They did not think that Jesus’ was just another Roman execution. But neither did they think that he died alone.

He died, for them, as the climax of all the suffering of Israel, as the consummation of all those prayers of lament in the psalms, as the fulfillment of all the faithful martyrs of the biblical tradition. The details of Jesus’ death were not fact remembered and history recorded. They were prayer recollected and psalm historicized. But, then, if the suffering of others was imbedded in the crucifixion of Jesus, must not those others have been vindicated by God in his resurrection. if Jesus’ death was a communal crucifixion, must there not have been also a communal resurrection? 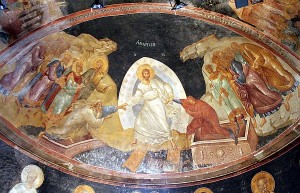 The Communal Resurrection of Jesus

In the great Rotunda of the ancient Church of the Resurrection — or Church of the Holy Sepulchre — in Jerusalem is a tiny free-standing shrine known as the Aedicule or Chapel of the Tomb and Resurrection of Jesus. It is a tiny space and pilgrims are usually lined up waiting their turn to enter a few at a time.

A processional banner was hanging to our right as we entered that shrine-chapel in May, 2008. It is kept there, presumably, to be used in liturgical celebration on Easter Sunday. It is bright red with golden lettering down either side. To left is the word “Christ” and to right “Is Risen” — both in Greek upper-case letters. No surprise there since that is Easter’s celebratory greeting in Eastern Christianity. But in between those words, in the center of the banner, is a diamond-shaped image. And it surprises us.

That image does not show Jesus arising in splendid triumph from an opened tomb. This is not — even in miniature — a Titian or a Rubens with Jesus emerging in muscular majesty. But emerging, however majestically, in magnificent and lonely isolation. Instead, four other individuals are with him in this parabolic vision.

Jesus himself is at the left of the icon. He holds a small cross in his left hand and stands on the bi-fold gates of Sheol, Hades, or Hell which are shattered into a cross-shaped structure beneath his feet. Jesus is bending forward — gently, tenderly, graciously — and, stretching out his right hand, he grasps and pulls on the rather limp wrist of Adam. Beside Adam stands Eve. Behind the two of them stand a youthful Abel, with shepherd’s staff, and an older John the Baptist, with beard and long hair. They are the first martyr of the Christianity’s Old Testament and the first martyr of its New Testament.

At the top of that diamond-shaped image, lest there be any mistake about meaning, is the word Anastasis, Greek for “resurrection”. But is not Easter about the absolutely unique resurrection of Jesus alone, so why are any others involved and, if others, why precisely these others? The answer reveals a major difference between Easter Sunday as imagined and celebrated in Eastern Christianity as opposed to Western Christianity. It also reveals for me the latter’s greatest theological loss from that fatal split in the middle of the eleventh century.

When you look at Eastern Christianity’s images, either for the great feasts of the liturgical year or for traditional events in Jesus’ life, they are all — save one — quite recognizable to Western as to Eastern eyes. The great exception is how Eastern Christianity portrays the “Resurrection,” that is, in Greek, the “Anastasis,” of Jesus. Across vast stretches of time, place, art, and tradition, icons and illustrations, frescoes and mosaics show always a communal and not an individual resurrection for Jesus. We can watch that magnificent tradition develop across half a millennium — from 700 to 1200 — before its varied elements and successive stages are fully established.

First, the various elements of the tradition. Jesus is shown breaking down the closed and bolted gates of the Underworld — as Sheol, Hades, or Hell — the abode of the Dead, the prison of “those who have slept” — that is the same Greek term used for them in both Matthew 27:52 and 1 Corinthians 15:20. The personified Hades, Prison-warden and Gate-keeper of the Dead, is shoved to one side or even walked on as Jesus barges in to liberate his prisoners. Jesus is usually carrying a cross, his wounds are often very evident.

Only six individuals are identified from the crowd responding to Jesus’s arrival among the dead — they appear chronologically across the tradition’s development in this sequence. First, bearded Adam and youthful Eve appeared. In almost every single image, Jesus grasps the wrist of Adam to pull him alive from his tomb. Later, David, with crown and a beard, along with his son Solomon, with crown but without a beard, were added. Finally, as seen above, those twin martyrs, the Shepherd and the Baptist, joined the others. So, in summary, two ancestors, two monarchs, and two martyrs are singled out from the crowd. Still, if Adam and Eve are freed, who is not?

Next, the successive stages of the tradition. In the first stage Jesus is always approaching — as we just saw above — and grasping Adam’s wrist. A next stage shows him leaving — often looking backward or forward as he drags Adam by the wrist with the others looking on. A third or facing stage is similar to that last one except that now Jesus looks not backward or forward but straight out of the image — at you, the beholder.

Finally, there is the last or doubling stage and I must admit that it is my favorite. Jesus has put down the cross — sometimes an angel holds it for him — and Adam and Eve are now on opposite sides of Jesus instead of, as earlier, both on the same side. Each gets a hand at this stage. We finally have an equal-opportunity resurrection of the dead.

In the western Christian tradition we call that tradition the Harrowing — or Robbing — of Hell and keep it carefully distinguished from the individual Resurrection of Jesus. “He descended into Hell,” says the Apostles’ Creed, “on the third day he arose from the dead.” But in the eastern Christian tradition it is the communal Resurrection of Jesus. We, to our loss and my grief, have forgotten that corporate vision of Easter.

Eastern Christianity’s tradition of the resurrection of Jesus reminds our Western Christian imagination that only poetry — be it verbal or visual — speaks to our profoundest hopes, deepest dreams, and greatest insights. It also reminds us that theology is — no more and no less — the poetry of transcendence.