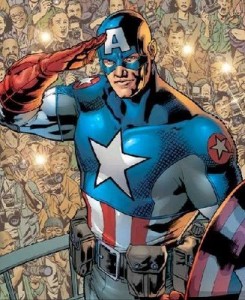 The study, conducted by the Public Religion Research Institute in cooperation with the Brookings Institution, also found that these white evangelicals are joined by a majority of all U.S. residents (58 percent) who also believe that, “God has granted America a special role in human history.”

Now the question immediately arises, “What is a ’special role?’”

Unfortunately, I don’t think that’s what most of the respondents in the study had in mind, and the research of Robert P. Jones, CEO of the Public Religion Research Institute, seems to agree. In Jones’ analysis he found:

Jones is referring to the disturbing finding in the same study that a majority of white Americans who say God has a special role for the U.S. also believe that peace is best found through the use of military strength rather than diplomacy and that torture can be justified in at least some cases.

Additionally, an especially regretful 73 percent of those who identify with the Tea Party chose military over diplomacy.

Yes, God has a plan for us, but it is “love your enemies and pray for those who persecute you.”
Another red flag went up from the study when respondents were asked what was the most important factor heading into this year’s election.

Nearly everyone in the country has been affected by the recession; many families are subsisting day-to-day in a manner they never would have imagined just three years ago. Everyone knows someone who has lost a job and is suffering from the financial and emotional consequences.

It’s not too surprising then that almost half of the respondents listed “the economy” as their top concern. But we, as Christians, have to be diligent that we don’t let our other priorities fall by the way side. It’s disconcerting to hear that only 1-in-20 respondents listed their main concern as the wars in Iraq and Afghanistan, where both the residents of those countries and the soldiers of this nation must remain prominently on our minds. Similarly low numbers of respondents listed immigration or same-sex marriage as their top priority.

If we truly were to be an “exceptional” nation, one would expect our priorities to be aligned in an exceptional way. As Jim Wallis says, we can’t just ask when we’ll get out of this recession; we have to ask how it will change us. We must guard against fixing our sights solely on the wealth of our nation. “For where your treasure is, there your heart will be also.”

Let us pray for our nation that it will do its best to reflect God’s kingdom and not try to become God’s kingdom, and let us contemplate the sobering words of the Psalmist, “Therefore, you kings, be wise; be warned, you rulers of the earth. Serve the LORD with fear and celebrate his rule with trembling.”

Andrew Simpson is a policy and organizing intern at Sojourners.