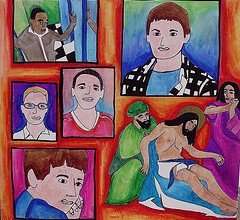 Stations of the Cross are a series of artistic representations of the Passion of Christ, depicting the story of his death from his sentencing to the laying of his body in the tomb.

The fourteen images are used devotionally during the Lenten season for prayer and reflection. They provide an opportunity for Christians to enter into the story of Christ’s suffering and experience a relationship with a God who suffers with us.

This series of stations combine images depicting the struggle for LGBT equality through the 20th and 21st century. Each station illustrates the many ways in which the pursuit of justice for LGBT peoples is embedded in the history of the United States.

One thought on “Stations of the Cross by Mary Button”