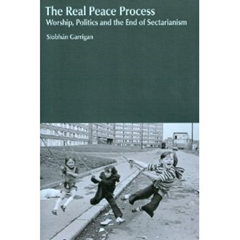 ‘The churches in Northern Ireland are uninterested in post-violence reconstruction.’Those were the words of John Brewer, Professor of Sociology at the University of Aberdeen, last month at a conference in Belfast on Trauma and Spirituality.

Brewer’s comments sparked some controversy. Like Brewer, I know that there have been courageous Christian individuals who have worked tirelessly for peace at the grassroots. But like Brewer, I also think that the churches generally have not put the full weight of their institutions behind reconciliation. And I think that most Christians in Northern Ireland fail to see how sectarianism can infest their everyday practices in almost imperceptible ways.

This results in people blaming sectarianism and violence on a few ‘bad men.’ This means that we never get to the heart of how sectarianism is embedded in the very structures of life in Northern Ireland. Everyone is implicated in that system and should share some responsibility for dismantling it.

A new book by Siobhán Garrigan, The Real Peace Process: Worship, Politics and the End of Sectarianism, offers some creative thinking about how our particular brands of sectarianism might be transformed.

The book, published in 2010, is part of Equinox Press’s ‘Religion and Violence’ series and is unapologetically academic. Garrigan, who is described as ‘British and Irish by nationality’ on the book jacket, is Senior Lecturer in Religion and Theology at the University of Exeter.

The first chapter, ‘worship and sectarianism,’ is an academically sophisticated analysis of how sectarianism functions as a system in Northern Ireland. It’s also where she starts to explain her argument that Christian worship can be a place where sectarianism need notbe perpetuated — as she claims it is in many cases in Ireland and Northern Ireland.

Let’s be clear. Garrigan is not saying that religion is the primary cause of the conflict in Northern Ireland. Nor is she claiming that Christian worship practices are responsible for sectarianism. Nor is she arguing that changing worship practices is the one-and-only key to breaking down that sectarian system.

With that established, Garrigan shares her insights on how specific worship practices in Ireland’s Catholic, Church of Ireland, Presbyterian and Methodist churches reinforce sectarianism in subtle and unintended ways.

Her analysis, based on observations in churches in Ireland and Northern Ireland between 2001-2008, are organised into chapters with these headings: ‘space, gestures, bodies and visuals’; ‘words’; ‘meals’ (primarily the Eucharist or Communion meal); and ‘music.’

I hope that this book finds its way to a wider audience outside academia, especially to people in the churches on this island. It might not always be easy to hear what Garrigan has to say about our current religious practices. But she writes with a loving conviction that if Christians prayerfully reflect on what’s currently happening in our worship, then it can be transformed for the spiritual, social and political good of all.

There is a wealth of rich material in each chapter. But Garrigan devotes more analysis to religious practices within Catholicism, particularly in the chapters on ‘meals’ and ‘music.’ This is not to say that Garrigan thinks that there is more ‘wrong’ with Catholicism than with Northern Ireland’s various brands of Protestantism.

Rather, I think her analysis of Catholicism goes some way towards correcting an imbalance in the academic literature on the role of religion in Ireland and Northern Ireland, which has tended to focus more on evangelical Protestantism.

The greater focus on Catholicism also situates the book more readily in an all-island context. This, it is hoped, can help to overcome the southern Irish misperception that sectarianism is solely a Northern Problem.

For me, Garrigan makes her most impressive analysis in the chapter on ‘meals.’ Garrigan asks why the Irish Catholic Church, alone among English-speaking countries with significant Catholic populations, does not regularly feature wine in its Eucharistic meal?

Garrigan considers multiple reasons why this might be so, from the idea that it is an attempt to assert clerical power to the idea that Irish Catholics perceive receiving the wine during Eucharist as a practice that is too ‘Protestant.’

But Garrigan rejects these surface readings, probing deeper to examine Irish Catholics’ relationships with food and drink through examinations of the cultural effects of the famine and alcohol abuse. She also considers how the theological dimensions of the Irish tradition of hunger striking play into this complex mix, noting that while many Irish Catholics may have identified the hunger strikers with Christ’s sacrifice this was not an official church interpretation.

‘Remembering the famine, reputed alcoholism, and the hunger strikes all invite interrogation of the absence of drinking at meals in Irish churches in the context of the peculiar histories of Ireland’s recent past. They also strong suggest the relation between state (politics) and liturgical practices (religion) at every turn. The non-drinking of the wine, the blood of Christ, connotes so much: resistance, guilt, military tactic, shame, confusion and not knowing who one is. Each is a profoundly sectarian-implicated (and possibly colonial-related) response. Given the distortions (from supposedly normative Eucharistic theology) represented in the above account, and given the complicating factor of the rhetorics of ‘bodies broken’ and ‘blood spilled’ the media create in Ireland and Northern Ireland, what would it take to celebrate the Eucharist in a non-distorted fashion there?’

Garrigan suggests a number of strategies for addressing this, such as introducing the practice of distributing the cup to one another rather than through a Eucharistic minister, fasting from the Eucharist for a time to aid reflection on the Irish Catholic Church’s current Eucharistic practices, and a ‘re-education’ process that would discuss ‘the associations people have accrued regarding the Eucharist’ (p. 155).

In the conclusion, Garrigan argues that transforming sectarianism will require more than just inter-denominational encounter (the so-called cross-community work with which we are so familiar). For her, changes must also happen intra-denominationally. She offers the following practical suggestions:

Garrigan ends on a positive note, urging Christians on this island to begin ‘the process of worshipping our way beyond sectarianism.’ Considering the ideas on offer in her book could be a good first step on this journey.