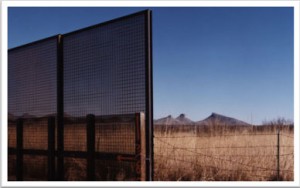 The Border Campaign of the Sierra Club – Grand Canyon Chapter has updated for 2010 a 20 minute video about the environmental effects of the current border policy, “Wild Versus Wall.” This video covers the ecological effects of enforcement and infrastructure in the four states that share boundaries with Mexico.

Tucson-based filmmaker Steev Hise has been working on the film since January, 2007. He traveled to Texas and California during the spring to interview land managers, scientists, and activists who are working to limit the ecological impacts of border wall construction.

“I have been covering border issues in southern Arizona for a while,” said Hise. “One of the great things about this project was traveling to other places along the border and to see how people concerned about the recent border militarization have the same outlook as people do here. They are also trying to stop the Department of Homeland Security from running roughshod over natural resources and constitutional rights.”

Hise also gathered footage from a diverse array of sources, including some of the Border Patrol’s own employment videos, which show agents blazing along on off-road vehicles. Numerous photographers contributed images of the rich ecosystems and species that are impacted by border infrastructure projects and local biologists lent their eyes and ears to the factual background of the habitats at stake.

DVDs are available via mail, a suggested $10 to $20 donation per DVD is greatly appreciated. Send your name, address, and donation to Sierra Club Borderlands, 738 N. 5th Ave., Suite #214, Tucson, AZ 85705. Make checks out to “Sierra Club Grand Canyon Chapter” with “Borderlands Campaign Wild Versus Wall DVD” in the memo line.

View the full 20 minute video (below).