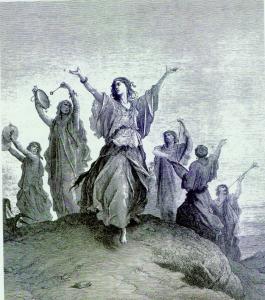 By Monica A. Coleman, April 13, 2011
This is one in a series of Lenten reflections on the men and women who became the “shouting stones” for Jesus on his way to the Cross. How do the actions of these everyday folk invite us in our Lenten journeys? In this reflection, Monica Coleman imagines the songs of the women in the days leading up to Jesus’ crucifixion.

Singing at the Foot of the Cross
Based on Matthew 27:55-56
Mary’s house was the kind of place that was never quiet or still. There were always boys and girls from the village running in and out of the front door. There were the rhythms of the hammer coming from Joseph’s shop, and the loud shouts of the children and the voices of us women.

Us women sang. We sang the songs that we had always grown up with. It wasn’t about harmony; it was about the togetherness of the women. It was about singing our traditions. Singing our sacred songs.

In the morning while we prepared breakfast, we sang our meditations:

Give ear to my words oh Lord. Consider my meditation. Hearken unto the voice of my cry. My voice you will hear in the morning.

Other times we praised:

As the deer pants for the water so my soul longs after You. You alone are my heart’s desire and I long to worship thee.

Always, the songs of our people. I don’t even know where they come from. They’ve always been sung. My mother sang them when I was a child, and her mother before her and her mother before her. We heard some of them in temple and others were the kinds of song you’d only hear softly under a mother’s breath while cleaning the house, or rocking the baby, or trying to make it through a tough time. I just can’t remember a time when there weren’t the women’s songs, and I can’t remember any time when we weren’t singing them at Mary’s place.

Not all the songs were happy songs. Sometimes we sang with longing for better times. It was like we were weeping with our voices. It wasn’t Babylon like it was for our foremothers. But the Romans were lurking around all the time, taxing us and just punishing people for following the customs we had always followed. I mean, if anyone was caught doing anything that seemed out of place with Roman law and customs, there was always a price to pay. Maybe the tax collector took a little bit more next year. Maybe a brother or uncle would lose an entire harvest and receive no help from the government. It could be anything, but sometimes, it was like we were singing in a strange land. And we had songs for that too.

Any day now, we knew. Because things were getting tough. The taxes were getting higher. The insane cried louder. The poor were getting poorer. The old were dying younger. The girls were bleeding sooner. And worst of all, the crucifixions were more often. It was a tough time and we knew that God would not permit us to endure this much longer. Our salvation had to be coming and it had to be soon. So while the men talked revolution in the parlor, we sang of revolution in the kitchen!

I never really pictured it would happen. I didn’t know how this leader would overthrow the government and be overthrown himself. Isaiah described him as mighty, but having a tough time himself. The prophets said he would be despised and rejected. That he would be mocked and spat upon. That people would esteem him stricken and smitten of God. They said that he would be hurt for our wrongdoings. How was this type of leader going to remove this yoke of oppression?! I didn’t know. But God said that the leader was coming and we believed, and we talked about it and we looked for it and we continually sang about it. Like we had always done.

Growing up in a home like this, it doesn’t surprise me that Jesus’ ministry was always filled with songs. Some people came because they had heard about all the miracles Jesus performed. Others were attracted to his teaching. As we all went from place to place, village to village, we all sang together:

Come we that love the Lord and let our joys be known. Join in a song of sweet accord, We’re marching to Zion, beautiful beautiful Zion

And sometimes it’s still hard to believe that little Jesus is the one. Sometimes, I look at his face and I see Mary’s baby. It’s hard to think of him as prophet or Savior. But when he bade the paralyzed man to walk, or he walked across the water, there was no doubt. Then he talked about putting new wine in new bottles and he talked about the way that our faith was like planting seeds in bad soil or good ground. He made everything fit together and he spoke like he knew . . . he spoke with authority. Only our Messiah could attract people like that. And only God could give such wisdom.

When did it change? I don’t remember. Maybe it was when that woman came in with all the nard. For the first time, instead of being surrounded by the sounds and smells of life, we smelled death.

It was as if that was the beginning of the end. No more large and lavish meals.No more singing. Jesus withdrew. He celebrated Passover with only twelve. He went into the garden to pray by himself. When they questioned him, he was silent.

We were still celebrating Passover in our homes when we heard. But by that time it was too late. Where were the men? Where were Peter and Judas and Matthew? Why didn’t they do something to stop all this? Why? But there was no time for questions. We had to get to Golgotha.

We all ran together—me, Mary and Mary and Salome and all the others. But by the time we arrived, he was already on the cross.

It was an ugly scene. Blood was everywhere. They actually put thorns on his head. People were shouting and shouting: “You that destroyed the temple and built it up in three days, save yourself and come down from the cross.”

And they teased and spat and yelled at Jesus. Mary’s baby! Our Jesus! Our . . . our messiah!

And then, I heard him. Clear as a bell. At first it was soft, and he said it like a proclamation. “My God, My God why have you forsaken me?”

We recognized it immediately, and began to sing with him. We sang the blues song Jesus had learned from us:

We gathered around him. The crowds yelled and Jesus was dying. It would soon be our turn to get the nard and wrap his body. But for then, we surrounded him with our songs, the sacred songs of his people. And I know he heard us and felt better. I know it made him feel closer to home. In my heart, I know that this song connected him to God, to Mother God! Sing with me . . .

Monica Coleman is Associate Professor of Constructive Theology and African American Religions at Claremont School of Theology and blogs at Beautiful Mind Blog.