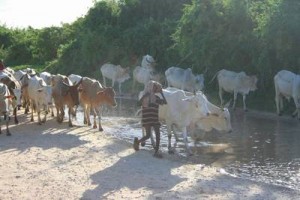 In 2011, the Seven Weeks for Water will focus on “Water, conflict and just peace”, examining the links between access to water, water struggles, and building just peace:

Humankind is related to the land and the environment from the beginning of creation: “Then the Lord God formed a man from the dust of the ground and breathed into his nostrils the breath of life, and the man became a living being” (Genesis 2:7).

Today, many developed countries invest in land abroad to support their growing populations. Local communities get pushed off their lands without consultation. Control over the land often goes hand in hand with control over water resources.

Land and water grabbing are a threat to livelihoods of small-scale peasants, pastoralists and indigenous people.

Adamah – the land from which we come from

In the beginning God created the heavens and the earth (Genesis 1:1).

The Bible begins with the story of creation by God, with the Genesis[1] of the Earth. Before the creation of humankind, God creates the heaven and the earth; he then separates the earth from water which he called “land,” and the gathered waters he called “seas” (Genesis 1:9). God then plants a garden and puts humankind in the middle of this garden to live there and to cultivate the land and take care of it and his creation (Genesis 2:15). Land is the place where humankind is invited to live and called upon to be its stewards.

The life of humankind is totally dependent on the richness of the land and the fertility of its soil; the land is not only the context for humanity (Ps 115:16), but much more. There is a deep link between both. In Hebrew adamah (אדמה) means “the land” or “the ground”, and adam (אָדָם) means “humankind” or human being. Genesis 2:7 seems to imply that the land is the root of the name of Adam: “Then the Lord God formed a man (adam- אָדָם) from the dust of the ground (adamah: אדמה) and breathed into his nostrils the breath of life, and the man became a living being.”

Whether this is truly the etymological root of Adam’s name is contested among biblical scholars[2]. In any case, the story of creation depicts humankind as “earthborn”, the first human having been formed by God from the dust of the ground, the adamah. Humanity is an inseparable part of the Earth.

This vital link between humanity and the “land” has existed from the beginning of creation. Almost all ancient civilizations perceived this deep link between the land and humankind and express it by using such expressions as “Mother Earth”.

Despite the deep relationship of humankind to the earth, today, humankind overexploits the land and water for our own interests, forgetting that we were called to take care of the Earth, God’s creation. Our greediness is such that we covet ever more without thinking about the Earth and the needs of vulnerable people.

The Tenth commandment of God commends us to not covet our neighbour’s property (Exodus 20:17). However, today many companies and governments invest in land resources for large-scale industrial agriculture in very poor countries – in a way which often affects the livelihoods of local communities, such as peasant farmers, pastoralists, or Indigenous Peoples. For these people the link to the land, including its rivers, lakes, and springs, is strong and vital.

How can we ignore the fact that millions of people are already suffering and dying because of the greediness of others? How should we address issues which are linked to the unjust sharing of land and water, such as land and water “grabbing”? How is it possible to come from the land, to be adamah and then to become a land grabber? To deprive people of the land from which they come – and to which we all will return eventually?

The biblical understanding of what it means to be a human being, an adam, stands in contradiction with the reality of some enriching themselves at the expense of others. There is an urgent need to act and struggle for justice, equity, solidarity, human development and environmental conservation. Adam was created to take care of the Earth (Genesis 1:28s), not to grab the land from others, to be a steward of and not overexploit the land and its natural resources.

In this context, it is important to remember that in the struggle of land nobody will remain on it, but the all human beings will return to the Earth from where they came: “By the sweat of your brow you will eat your food until you return to the ground, since from it you were taken; for dust you are and to dust you will return” (Genesis 3:19). Thus, we can see that the link between land and humankind continues to be very strong, for better or for worse. Solutions must be found to respect our environment which is adversely affected. Our solidarity with our neighbours needs strengthening, our sisters and brothers need our help and love. Jesus calls us to: “Love your neighbour as yourself” (Mark 12:31), not to greedily covet their property as is too often the case in today’s world.

Ani Ghazaryan is a young theologian from the Armenian Apostolic Church. She is a PhD candidate at the University of Lausanne, Switzerland.

Opinions expressed in Biblical reflections do not necessarily reflect EWN and WCC policy. This material may be reprinted freely, providing credit is given to the author.

The introductory background brief by the Ecumenical Advocacy Alliance and the Ecumenical Water Network provides an overview of the effects of land and water grabbing on communities.

Right to Food and Nutrition Watch

The Right to Food and Nutrition Watch is the first and only international periodical review that monitors state actors’ actions related to the realization of the right to food and nutrition. The 2010 issue focuses on the dramatic increase of land grabbing (large scale land acquisitions of international investors) and shows how land grabbing aggravates hunger in Africa, Asia and Latin America by leading to eviction of peasant communities from their main source of livelihood.

“Large-scale land acquisitions and leases: A set of core principles and measures to address the human rights challenge”

Olivier De Schutter, special rapporteur on the Right to Food, proposes a set of core principles and measures to address the human rights challenge.

From 2009-2012, the Ecumenical Advocacy Alliance (EAA) is focusing on food – in order to overcome hunger and to improve livelihoods in harmony with creation and social justice.

Sign a letter to the Food and Agriculture Organization (FAO) in support of the food and water rights of vulnerable communities!

The FAO is currently developing “voluntary guidelines on responsible governance of tenure of land and other natural resources”.

Though non-binding, such guidelines are recognized as internationally accepted standards. They provide a framework that governments can use when developing their own strategies, policies, legislation and activities in the land sector. They also can help communities and civil society to hold their governments accountable.

A first draft of these voluntary guidelines is currently being prepared. It will be made available to the public in beginning of June 2011.

Sign the letter to the FAO demanding that the guidelines on land and natural resources should include standards protecting access to essential resources, including water, for vulnerable communities such as small-scale farmers and indigenous peoples.

Join the Fast for Life!

Use, adapt and share the Ecumenical Advocacy Alliance’s resources for Ash Wednesday to reflect on hunger in a world of abundance and in solidarity with those who are suffering from it.