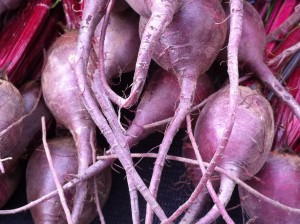 There’s a field of gold outside the city of Bethlehem – a field bursting with barley plants ready to be harvested. Barley is similar to wheat, but with a thicker, longer head of grain that is able to thrive in a variety of climates. As the workers get ready to harvest the barleycorns, there are two places you can stand to watch them work. One perspective comes from above – from higher ground, near the threshing floor, where the barley will be brought to separate the grain from the husks and chaff. It’s the place where Boaz stands, the owner of the field whose wealth comes from the work of those he oversees, literally. The other perspective comes from below – from the level of the field itself; either seen with eyes focused ahead on the rows of grain before you, or as in the case of Ruth, with eyes focused on the ground, intent on picking up the slightest stalk or kernel that the gleaners have let fall to the ground. The view of Boaz and the view of Ruth:

Where you stand makes all the difference in the world in how you see things.

The Boaz view from high above is able to survey several fields at once – not only the barley ready to be harvested, but the wheat fields nearby that in a few months will be ready themselves. Behind them, you can see the grazing cattle and barns for livestock – all agricultural commodities able to be converted into personal wealth. In the Boaz view, each husk and kernel, each calf and hen is assigned a price and thereby a value. The Ruth view from below is quite different. The grain is literal food, pictured as it moves from kernel to flour to bread. To whatever extent Ruth is aware of the price of barley, she is keenly aware of its value – not as something to be accumulated but as something that offers life and the hope of survival.

Being this close to the crop, workers with a “Ruth point of view” know the language of the plants. They understand how you must rotate crops and rest your fields, or the soil will die. They know that disease and drought are inevitable, so you treat your seeds as the treasures they truly are, for they promise food for future tables. You maintain a variety of seeds, so that in good weather or poor, some will thrive and your children will be fed. What seems so obvious from the field level is rapidly being ignored today from the “Boaz point of view.” Uniform rows of crops, artificially helped to grow by chemical fertilizers that leach into the groundwater, are the preferred sight. Only a few varieties of seeds dominate the market, with some designed genetically so their offspring are sterile, forcing farmers to buy a fresh supply every year. Forests are cleared and people uprooted from homes so that large agri-businesses can be established. These produce corn and soybeans, not so more people can eat, but for cattle food (to supply hamburger for Big Macs and Whoppers) and car fuel (for our insatiable demand to keep our gas tanks full). But outside Bethlehem there stands a solitary field: either seen as a place that can support families and meets immediate food needs, or seen as part of a larger agricultural complex generating immediate profits for those in control. How you see it depends on where you stand.

The “Ruth view” is distinctive in another way. The young woman is doubly at risk – as a woman and as a foreigner. Remember, she was the Moabite who came to Bethlehem to help her mother- in-law Naomi. In a male-dominated culture, Ruth had no status apart from her value as a worker for someone else. That is why, when she was spotted in the field, the first question about her was “To whom does she belong?” In global cultures today, regardless of geography or faith traditions, around the world and right here, that sexist question is still being asked far too frequently. “To whom does she belong? Who has ultimate power over her?” Despite the fact that the majority of the world’s food is being produced by women – up to 80% in Africa and 60% in Asia – women account for 70% of the world’s hungry.1 Look to see who is malnourished or who is unsure about surviving seasons of drought or cold and most often a woman’s face looks back at you.

The fact that Ruth found favor in the eyes of the field overseer, and eventually from Boaz himself, speaks of a sense of community that existed in Old Testament times. People noted that Ruth was faithful to Naomi, and once Boaz learned of her situation, he instructed his workers not to molest her or keep her from the wells of water – all of which was part of a communal perspective in which the few looked after the many. It was a culture in which grain was to be left on the margins of the fields so the poor might survive; a society in which people’s needs were considered even as businesses sought to be profitable. The modern “Boaz view” is not so kind to the marginalized and the foreigner. The guiding principle today is much more individualistic in focus – if life and circumstance pushes you to the margins, you are on your own in getting out of the ditch. If your paperwork is not correct, if a foreign accent is heard when you speak, you run the risk of being locked up or sent away, no matter how much modern “Boazes” depend on “coyotes” and undocumented workers to generate profits for themselves. Moving from a “Boaz view” to a “Ruth view” means we remember a fundamental fact of life today: “What separates the poor from the rest of society is only the difference in where we were born and to whom, not the difference of who we are.”2

Two people consider the same field of gold. One person looks down from on high, from a distance in which individual faces blur and only the language of numbers seems important: how many workers, how many sheaves of grain, how much profit is generated. One person looks at the field from ground-level, from the distance where it is imperative to see one another’s eyes in case there is danger or violence lurking in someone’s gaze. And if you are to survive, you must know their story – Who is related to whom? Can they be trusted? Are they hungry? How can we survive together? The theologian Eugene Peterson has argued that if you read scripture carefully,the poor “are not a problem to be solved but people to join.”3 He stresses that there is a very close connection between the Hebrew words for the poor (aniyyim) and the humble (anawim).

“Poor” is a socio-economic condition, while “humble” identifies a moral-spiritual condition. Neither, though, should be construed to mean that they lack intelligence, lack integrity, initiative, hopes, or dreams. The poor lack resources. The poor lack opportunity. The poor lack power in the typical ways that power is defined and allocated in our “Boaz view” worlds. That is all.

Some argue that we should not concern ourselves so much with the poor. Perhaps their status is a result of God’s disfavor, or at least God’s desire to keep them marginalized and downtrodden. In the time of the Bar-Kochba Revolt in Jerusalem, Tinnaeus Rufus was the governor of Judea. The story is told that one day Rufus taunted the famous Rabbi Akiba by saying, “If God wanted some people to be poor, what right do rich people have to help them? Imagine a slave jailed by his king; if you smuggle food to the prisoner, won’t the king be angry?” Rabbi Akiba replied, “Imagine a king whose beloved son is in jail. If you smuggle food to that prisoner, won’t you be rewarded by the father?” Rabbi Akiba concluded by saying, “It is up to us to decide whether we want to be God’s slaves or God’s children.”4

Slaves or children? Jesus offers the clearest answer: “Blessed are you who are poor, for yours is the kingdom of God” (Luke 6:20). “I do not call you slaves any longer, because the slave does not know what the master is doing. I have called you friends… and I appointed you to go and bear fruit, fruit that will last” (John 15:15-16). Even with those words of assurance, we stand beside Ruth and glance up at the surrounding hilltop where Boaz looks down at us and we doubt whether we can make any difference at all. We pass the industrial farms, the feed lots and grain silos; we see semi-trailers unloading shrink-wrapped ground beef and chicken parts; we read about E Coli and salmonella outbreaks, about deforestation and lost bio-diversity. We imagine our influence extends only about as far as Ruth’s gaze did long ago – just to the area around our feet, where we too feel like a single, helpless person moving on the margins of a huge field of activity. What can we do?

Where you stand makes all the difference in the world in how you see things. Advocacy groups remind us that you use your power every time you shop. Every meal we serve is a force for change. It’s been estimated that the produce we put on our plates travels as much as 1,500 to 2,000 miles from where it was grown to where it is consumed, via transportation that guzzles gas and spews toxic emissions all along the way.5 So eat locally grown food whenever possible. Eat what is organic. Eat less meat. Read the label and know what is in the food you choose. Work to help urban communities provide healthy options for children – whether served on plates at home or plastic trays at school. The earth can feed all who live on this planet. The problem is we are consciously, actively choosing not to feed one another.

The scripture passage from Ruth ended with a telling comment. As the overseer told Boaz, his boss, about the Moabite girl gleaning in their field, he speaks of her with some compassion. He tells a bit about how she is helping the widow Naomi. He reports that she politely asked permission to pick up the kernels of grain dropped by the other reapers. And at the end, he notes that she has been on her feet from early this morning until now, without resting for a moment (Ruth 2:6-7). As we mull over our responses to hunger in America and hunger in the world, as we scrape food from our plates into the trash, as we pick from which places we buy our food and decide what we will buy based far too often only on cost and convenience, Ruth and millions upon millions like her remain in the field. This very day she and many others are working without resting for a moment, just trying to survive.

We can do better. This is not just a practical issue or a political issue. It is a spiritual issue. It is about freeing people – from sexist oppression, from debilitating poverty, from lives without a horizon of hope. It is about redemption – after the example of Christ whose sacrifice and whose love has redeemed us. It is about something as tangible as loaves of bread – wheat and barley, fashioned into loaves that we set out for our communion and invite all to partake. Now it is time to take the loaves to them, to travel down from our high places, our Boaz points of view, to seek out Ruth – to see the soil, the kernels on the ground, the fields of gold from her perspective. For where you stand, and with whom you stand, makes all the difference in the world.