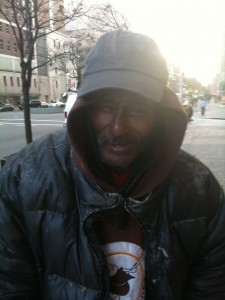 He was a street person, a black old man leaving on the streets. This morning he came to sit with others at Heine Brothers on the chairs/tables outside of the coffee shop. There were four/five of us drinking coffee and enjoying the sunshine. Our new neighbor was drinking tea he might have brought somewhere else.

As I continued to read my book and others continue to do their things, he started to laugh out loud alone, never bothering anyone.  His laugh was a breath of fresh air into our midst. From time to time he would scream “Hey” calling somebody’s attention. Nobody answered. He did address me once also and I said “Hi there.” He didn’t respond back.

He was next to me smoking and at some point he started to repeat “bluebirds, bluebirds, bluebirds” and started to laugh. I think he was seeing beautiful bluebirds around us. I looked around too to see if I could find them but he had special eyes I didn’t have. Again he would go: “Hey Mister” and go back to his own thoughts.  Nobody would listen to him.

Not long after that the police arrived and he was asked to leave. He asked the police officer: “what happened?”

And the officer said: “somebody said you were making trouble and annoying people.” He said, “no sir I was not!” I said nothing… The officer asked: “do you have a Heine Brother’s coffee with you?” He said “no sir I have my cigarette and my tea.” He was asked to leave the place. He was scared he said: “I ain’t bothering anyone but I will sure leave.”

Surely he might have bothered somebody who called the police and called 911 to “clean the space.” So the police came and the space was cleared, cleaned, robbed off of a taint, an undesirable presence. And this man had nobody to testify for him. Not even me. He had only his own voice and the appearance of something we don’t like: a poor black old male with perhaps mental problems.

Too much to handle, too much foreign space and uncomfortable situation to engage.

He had to leave. I wonder how many times this man feels he does not fit anywhere, that he cannot stay a little longer at any place. He is not desired and other people, feeling distressed by him  try to clear out the space and kick him out. And he has nothing else but his own voice that sometimes/most times will not matter much. He has to leave because his presence become a threat. It was as if this black man was himself an enormous potential to harm others!  He left saying: “I aint’ bothered nobody Sir. Have a good day.” And he was right, he had not bothered anybody. Really!

Photos: In this post, pictures of Marvelo, a black man who lives on the streets of New York City. We became friends when I was living in NYC. The black man this morning reminded me of Marvelo. 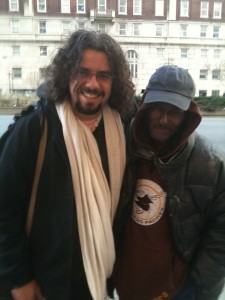