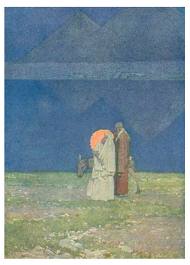 On Easter morning, Christians in this country and around the world proclaim “Christ is risen! He is risen indeed! Alleluia!” We declare this joyfully, accompanied by brass choirs and resounding organs. We call up all the extra choir members and bell ringers, dancers and drummers, to celebrate the great mystery of faith: Christ has died. Christ is risen. Christ will come again.

But even as we hail this festival day, we are ever more aware that this peculiar religious claim is not shared by many of our neighbors. What does it mean to proclaim Christ’s resurrection in a world of swarming religious diversity? Every glance at headline news reveals death-dealing religious conflicts in Egypt, Pakistan, India, Europe, and threats of religious violence in our own communities in the United States. We don’t need Christopher Hitchens to point out to us that strong religious convictions often motivate people to demonize and kill one another in the name of God. In such a world it is tempting to moderate our triumphant celebrations so that we do not contribute to the clash of religions.

Indeed, Christian history has frightening examples of Easter proclamation feeding religious violence, particularly against Jews. In the second century, an obscure preacher named Melito of Sardis wrote an Easter sermon in which he addressed “Israel” in harsh words: “You deserted the Lord, you were not found by him. You cast the Lord down, you were cast down to earth. And you — you lie dead, while he rose from the dead and went up to the heights of heaven.” The good news of resurrection in this case was very bad news for the Jews, condemning them while offering hope to Christian believers. History tells us all too clearly how such proclamation fueled anti-Semitic violence through the medieval era and, demonically, in the 20th century. Of this kind of resurrection preaching we need to repent.

CENTRALITY OF THE RISEN CHRIST

Yet a retreat into religious relativism offers no lasting answer. If we simply speak resurrection quietly to one another while insisting that it has no implications for the wider world, which is entitled to believe anything it likes, then where is our hope? Will we, for fear of offending anyone, refuse to sing our alleluias?

By no means. Resurrection is at the heart of Christian faith. The earliest Christian confession, “Jesus is Lord,” was a condensed proclamation that this first century Palestinian Jewish rabbi, who had been crucified by the Roman authorities for blasphemy and sedition, this same Jesus, had been raised from the dead. To be a Christian meant, and still means, to believe that God has raised Jesus from death and thus inaugurated God’s reign in the world.

This was shocking news. The hope for a general resurrection of the dead at the end of history was not new, of course. As Jon Levenson has helpfully shown, Jews had developed hopes for resurrection long before Jesus, and understanding these early Jewish beliefs can help Christians better appreciate what it meant for first century Christians to say “he is risen.” Belief in a future day of resurrection is still shared by Jews and Christians, as well as Muslims, and this can be a rich topic for interfaith conversation. Yet this common theme should not make us overlook the peculiarity of the Christian confession that in Jesus Christ, one person was raised from the dead. No one expected this. The Gospel accounts show how disorienting this event was. At the end of Mark’s Gospel account, the women run away from the empty tomb in terror and amazement, “and they said nothing to anyone, for they were afraid.” Matthew tells of the three women shaken by earthquake, watching the stone rolled away from the tomb, having to be reassured not once but twice, “do not be afraid.” Shock, terror, misunderstanding, confusion mark all of the initial encounters with the empty tomb and the risen Christ. We should not minimize this disruption of expectations in our own Easter proclamation. Announcement of Jesus’ resurrection is the disorienting center of the Gospel.

BOTH STRANGER AND FRIEND

Rather than downplaying the particularity of Christian faith at this point, facing the strangeness of resurrection may itself provide a clue about living in a world of religious “strangers.” For the Gospels themselves testify that the risen Christ whom the disciples encountered was both stranger and friend.

In John 20, Mary weeps outside the tomb, grieving a double loss: not only has her Lord died, but someone has taken away his body so that she cannot care for him. She turns and sees a stranger, the gardener, who asks her “whom are you looking for?” She asks if he knows where the body is so that she can take him away. And the stranger speaks her name: “Mary.” Turning again, she cannot believe her eyes. “Teacher! Rabbouni!” Perhaps she stretched out her hands, because he immediately cautions her, “Do not hold on to me.” She had desired to take away the dead body just moments before; now she encounters his body alive, but strangely transformed. And it is not for her to hold.

On the road to Emmaus in Luke 24, Cleopas and his companion also encounter Christ as stranger. Walking along in confusion, grieving the death of the prophet Jesus and wondering about this news of an empty tomb, they are joined by someone who asks what they are discussing. They fill him in on the fragments of the story: their lost hopes for a messiah, the disorienting news about women and angels and a missing body. At this, their unknown companion proceeds to reinterpret the truth of their own Scriptures. But it is not until they are at table, when the stranger takes bread, blesses and breaks it and gives it to them, that “their eyes are opened” and they recognize him — at which point he vanishes. Again, the risen Christ comes in the stranger’s guise. Again he cannot be grasped.

The resurrected Christ refuses to be held — not in a tomb, not even in the arms of his beloved disciples. He grants Mary a new life of hope and joy; he gives Cleopas and his friend new vision. Yet he grants this transformation precisely through coming to them as a stranger who eludes their grasp. This theme of strangeness, of otherness, here at the heart of the Gospel calls us to pay close attention to all strangers whom we encounter. As Rowan Williams, archbishop of Canterbury, says, “he stands as a stark reminder that it is only in confronting the partner and the stranger that we meet him. He compels us to self-forgetful ‘attention’ to all strangers and all dialogue partners — those of other races and cultures, of other faiths, of other Christian confessions … To let the other be strange and yet not reject him or her, to give and to be given attentive, contemplative regard — this is all part of our encounter with a risen Lord.”

THE OTHERNESS OF GOD

In a world of religious others, our proclamation “Christ is risen” does not turn us away from those who do not share our witness. Precisely the opposite: resurrection turns us toward the other. Just at this point of our most peculiar, most particular confession, then, we find an opening to the incomprehensible mystery of our God.

On Easter, we witness, we announce, we wonder. We do not grasp the risen Christ. He goes before us, the stranger, and because he carries our lives in his, we are drawn with him to encounter the otherness of God in the faces of all the strangers we meet.

Martha Moore-Keish is an associate professor of theology at Columbia Theological Seminary in Decatur, Ga.