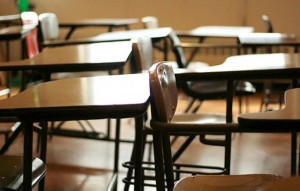 New York’s State Education Department issued a memo to its schools last week reminding them that they should not be forcing families to produce proof of their immigration status for their child’s enrollment in school.

Kirk Semple reports for the New York Times that the state distributed the memo after the New York Civil Liberties Union reported that at least 20 percent of the New York school districts were demanding children’s immigration papers before they could get into school. According to the NYCLU, they couldn’t find evidence that kids had been turned away if they were unable to produce paperwork—though even asking families for proof of their immigration status can often be threat enough that families may keep their kids out of school. The memo was sent out after months of pressure from the civil rights group.

Undocumented children, like U.S. citizen children, have the right to attend school full time as long as they meet the age and residency requirements established by state law. In a 1982 decision, the U.S. Supreme Court recognized that children who are undocumented immigrants cannot be denied a free public education if they are, as a factual matter, district residents

It then reminds administrators that schools would do well to focus on educating their students rather than asking unnecessary, invasive questions. Well, actually the memo says: “[S]chools should avoid asking questions related to immigration status or that may reveal a child’s immigration status, such as asking for a Social Security number.”

The NYCLU says the written memo will only be useful if its backed up by enforcement, which the group promises it will monitor.