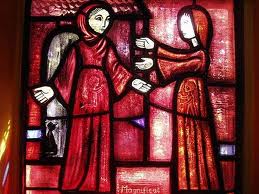 I’m taking a class on the Gospel of Luke this semester and one of my assignments is to engage in an ongoing spiritual practice related to that particular Gospel.  So for the entire semester I am reading the Magnificat daily.  It’s a passage that I’ve been drawn to in recent years, but it has been particularly illuminating to be dwelling on it during Lent this year since it is typically confined to the Advent season.  Somehow the triumphal language of the justice that God has already accomplished fits with the modern treatment of Advent as a celebratory season.  But Lent is a season of penance which puts an entirely different spin on the text.

I’ve been intrigued to discover as I study Luke this time that the language in the Magnificat of the mighty being brought down from their thrones and the lowly uplifted is a recurring motif throughout the book.  John the Baptist changes the scripture he quotes from Isaiah to talk about every valley being filled and every hill and mountains made low.  Jesus always comes down from the mountain to preach on a plain, and Luke even has the Beatitudes delivered on a plain instead of a mount.  God is at work making all things level – bringing down those who prosper now and uplifting those who suffer now.  A message that we sometimes can accept at Christmas with its reminder that the Savior of the world was laid in a lowly manger. But in Lent it is far more unsettling.

This is a season of penance and sacrifice, but often only of the personal kind.  We give up pleasures or habits for the sake of drawing ourselves closer to God.  For many the discipline of such sacrifice is simply a means of reorienting their worship and devotion to God so as to strengthen that commitment overall.  The discipline prepares one for deeper relationship with God.  But as John proclaimed, preparing the way of the Lord involves bringing down and lifting up.  And as Mary asserts, one magnifies the Lord because God has and is in the process of continuing to bring down and lift up.  But how often do our Lenten practices participate in this sort of leveling out?

Pietism that relies solely on personal sacrifices that affect us and us alone can serve to draw us emotionally closer to God, but our faith is not something that concerns just us.  We exist as a body and as members of the body of Christ the disciplines we engage in should always work towards the good of that body.  While being personally closer to God might serve the good of the body in some ways, it is rare that Lenten practices are conceived in such a way.  The recent popularity if the images included here attest that at least in popular perception Lent has nothing to do with working for the good of others, of righting relationships that are unbalanced, but is instead merely a selfish (and therefore) pointless practice.

What if our acts of repentance and confession instead served to care for the body as a whole? What if we confessed the ways we have uplifted the mighty (ourselves included) and brought down the lowly? What if our penance and sacrifice involved reversing that imbalance and preparing the way of the Lord by leveling out those relationships?  Yes, it is far more difficult to sacrifice a position of privilege and power than it is to give up chocolate or coffee for a few weeks, but it seems to far better reflect the ways God has called us to worship and follow after him. Sacrifice just for the sake of ourselves misses the point.  The reminder to bring down and uplift pushes us beyond ourselves to acts of love, repentance, and worship that serve the entire body and not just our particular part.

So while Magnificat is not normally a Lenten text, my meditation on it this year is teaching me that perhaps it should be.