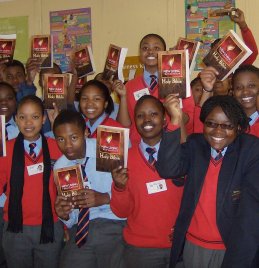 Reading the Bible in South Africa

The 2010 FIFA World Cup demonstrated the unity and capability of the new South Africa. Despite doubts and negative press from around the world, South Africa rose to the occasion by producing stunning new soccer stadiums, making its streets safe and accessible, hosting big-screen match viewings and fan parties, and creating an environment that welcomed thousands of enthusiastic guests for an entire month. Even before the final match, the success of the World Cup could be seen in hundreds of vuvuzelas blasting in the streets. South Africans of every race united in support of their team, their country, and their continent.

Unfortunately, in the aftermath of the World Cup the problems of economic disparity which had been forgotten during the month-long soccer party began to resurface. For years politicians claimed that the World Cup would boost South Africa’s economy and create many new job opportunities. However unemployed women and men in kwaMpumuza, a township on the outskirts of Pietermaritzburg, complain that the World Cup had not improved their employment status. The majority of poor South Africans have not felt an economic boost caused by the World Cup.

In the face of large-scale unemployment in many townships, tensions have arisen between unemployed South Africans and refugees and immigrants from other African nations. In the days following the World Cup immigrants reported being threatened with violence if they did not leave immediately; they were told that since the World Cup was over, it was time for all foreigners to go home. Several violent attacks attributed to xenophobia were reported in newspapers. The government believed this to be merely rumors designed to discredit the country’s positive post-World Cup image.

People of faith in South Africa expressed outrage against the violence and the government’s response to it. On Nelson Mandela’s birthday one week after the World Cup ended, a large group marched outside St. George’s Cathedral in Cape Town saying “NO” to xenophobia. But the issues that undergird this outbreak require more sustained reflection and response from South African Christians. A critical question facing the post-apartheid Church is how the Bible will be read and interpreted in the public sphere. Despite the vast political and economic changes that South Africa experienced after the end of apartheid and the first free elections held in 1994, the majority of black South Africans who lived in desperate poverty before liberation have seen few changes in their daily lives.

During the years of struggle the Bible was both a tool of oppression and liberation. In the struggle for liberation groups found that reading the Bible and articulating their theologies from the context of life under apartheid fueled their political motivations. Post-liberation, many churches and groups have found difficulty articulating a similar message in a new context. The new government has publicly celebrated that churches can return to focusing on spiritual and moral concerns, leaving political and economic issues to the state. Lacking direction and resources, many churches have done just this, while other groups have ceased to exist.

How the Bible is interpreted in South Africa’s new context will significantly influence the long-term outcomes of the economic issues previously described. If the Bible is only read for moral guidance on spiritual issues, then these questions will dominate public discourse while economic disparity will continue to be ignored.

One method of reading that seeks to confront these issues is the method of Contextual Bible Studies, developed by Gerald West, a biblical scholar at the University of KwaZulu-Natal in Pietermaritzburg. Taking a common interest and respect for biblical texts as a starting point, socially engaged biblical scholars like West read with poor and marginalized communities, empowering them to read and interpret the Bible from their own experiences. Reading from their own context allows readers to articulate their own theologies that represent the liberating message of the Bible (often in economic, in addition to spiritual, terms) instead of only espousing inherited interpretations that do not apply to the current context. This process begins to make readers aware of their own interpretation skills and empowers them with the confidence to act for change. The Bible’s message can be a catalyst for new and creative actions which could allow South African Christians to confront problems of poverty, unemployment, and xenophobia in the public sphere.

Gerald West. The Academy of the Poor: Towards a Dialogical Reading of the Bible. Pietermaritzburg: Cluster Publications, 2003.

James Hoke is a third year Masters of Divinity student focusing on New Testament and feminist/queer biblical interpretation. He received an International Ministry Grant from the Divinity School to investigate Contextual Biblical Interpretation in South Africa this summer.