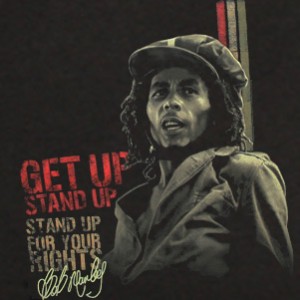 In the legendary song, “Get Up, Stand Up,” it is virtually impossible to forget the chorus:

Get up, stand up—stand up for your rights!

Get up, stand up—don’t give up the fight!

In these lyrics Bob Marley offers a resounding critique of traditional modes of Western Christianity which had served as a means of domination and oppression in Jamaica. In many ways, this pivotal song serves not only as a call to action, but offers a more confrontational and militant tone than previous records either by The Wailers, Marley’s band, or other reggae bands of the era. The song is also a wake-up call to those who might miss the prophetic message of reggae music illustrated in the following lyrics:

Great God will come from the skies,

And make everybody feel high.

But if you know what life is worth,

You will look for yours on earth…

Serving as the signature anthem for The Wailers, the band often made this the last song they played at each of their concerts. In fact, “Get Up, Stand Up” was the last song Marley performed live on stage at the Stanley Theater in Pittsburgh, Pennsylvania on September 23, 1980. By May 1981, this prophet and poet of the postcolonial era lost his own epic fight with cancer that prematurely ended his life at the age of thirty six. For these and other reasons, “Get Up, Stand Up” is the quintessential Bob Marley song insofar as it epitomizes the three movements—the three “Rs”, if you will—with which he will be identified forever: reggae music, Rastafari movement, and revolutionary action.

To date, no performer in reggae music has matched the level of notoriety and success achieved by Bob Marley. That being the case, Marley’s musical legacy is exemplary because it provides insights into the vagaries of postcolonial realities through an examination of how reggae music, Rastafari movement, and revolutionary action played out not only in Marley’s life but also beyond. Marley’s legions of fans worldwide are often unaware that reggae was a revolutionary music that emerged from the suffering of Jamaica’s poor masses in the island’s “concrete jungles.” Meanwhile, the Rastafari community was the target of police harassment and public alienation for decades, both during and after British colonial rule.

Dating back to its origins in the 1930s as a direct outgrowth of the intermixture of Christian millennialism and the pan-African ideology of Marcus Garvey, the nascent Rastafari movement believed that the Ethiopian emperor Haile Selassie I (1892-1974), a direct descendent of King Solomon and the Queen of Sheba, was God incarnate. In fact, the movement’s name, Rastafari, is derived from Selassie’s Amharic title and birth name—Ras Tafari Makonnen—prior to his ascendancy to the imperial throne in 1930. Since the late 1950s, reggae became the reigning musical genre within Jamaica’s popular music scene, and was increasingly identified with the burgeoning Rasta population working in allegiance with the country’s poor blacks in order to galvanize themselves into a full-blown social movement. In response to this upstart challenge, the postcolonial Jamaican government banned reggae from the nation’s airwaves for being politically controversial and even jailed or deported Rasta leaders considered threats to the status quo.

Once reggae became internationally popular in the early 1970s, however, internecine tensions among the Rastas grew volatile and effectively spawned countless quasi-Rastafari followers who embraced the most obvious symbols and trappings of the faith—dreadlocks, ganja (marijuana), and reggae music—without fully embracing the substance of the religion. Exploiting this situation as a prime political opportunity to mobilize the island’s disinherited populace for partisan gain, Michael Manley, the Jamaican Prime Minister, brought Rastafari political imagery, sacred rhetoric, and sociopolitical themes from the margins into the social mainstream.

In 1978, Marley, his family, and The Wailers returned to Jamaica from London after several years of self-imposed exile and subsequently performed at the “One Love” Peace Concert in the hopes of calming the strife between the island’s two warring political parties despite multiple threats against Marley’s life. Towards the end of the evening’s performance, Manley of the liberal People’s National Party and his political rival Edward Seaga of the conservative Jamaica Labour Party shook hands on stage at Marley’s behest. This marked a political sea change by the 1980s in which the Manley regime was displaced by the ultra-conservative Seaga interregnum, setting Jamaica on a decidedly troubling path away from progressive politics. In the decades that followed, heightened levels of desperate violence, illicit drugs, and pervasive poverty had besieged the political culture of Jamaica.

Reggae music is no longer heard as a mystical musical outcry against oppression. Instead it is often the commercialized soundtrack for a marketing campaign depicting Jamaica as a postcolonial playground. Likewise the Rastafari tradition is no longer a radical African-centered counterculture but an important symbolic trope utilized by Jamaican elites in order to maximize the nation’s marketability as a tropical vacation hotspot. In tracing the conjoined history of Rastafari theology and reggae music, the emerging postcolonial nation of Jamaica hijacked the musical and spiritual legacy of its reigning superstar in order to literally capitalize on its mythical image as an island paradise for tourists, most evident in the use of Marley’s songs “One Love” and “Three Little Birds” in a long-running advertising campaign by the Jamaican Tourism Board.

When did Bob Marley and The Wailers’ hymns to peace, love, and human harmony become appropriate fodder for state-sanctioned advertising jingles? Moreover, how did the spiritual warfare of Rastas as soul rebels railing against the amassed system of white colonial domination (commonly referred to as “Babylon” within Rastafari rhetoric) morph into the smiling and servile “Rastaman” pouring cocktails and handing out beach towels for tourists from around the globe? Given what has transpired since his untimely death more than thirty years ago, one can only wonder what Marley would think about the twin fates of both the music and the faith he represented so loudly and proudly. In order to avoid such a downward spiral, songs such as Marley’s “Get Up, Stand Up” should be heard anew in ways that will restore reggae music and Rasta spirituality to their original sacred as well as social significance in this post-everything era.
Juan M. Floyd-Thomas is Associate Professor of Black Church Studies at Vanderbilt University Divinity School. He is author of The Origins of Black Humanism: Reverend Ethelred Brown and the Unitarian Church (Palgrave Macmillan, 2008) and co-author of Black Church Studies: An Introduction (Abingdon Press, 2007).