Who would have guessed that a revolt of dogs in Budapest would be a metaphor for our times? Kornél Mundruzcó’s film, White God, isn’t your favorite feel-good Disney animal movie where dogs are often seen as kind, intelligent, loyal to humans and great companions, if not our very saviors. After Lassie, Rin Tin Tin, and the 101 Dalmatians, White God is your nightmare dog movie, where the animals appear in a brutal and savage Hitchcockian way, not only giving humans a good scare, but even destroying their daily lives.

On the surface, White God is a tale of dogs seeking vengeance for a range of treatment, whether overt abuse or just being taken for granted, at the hands of masters, animal control agents, and human society at large. But to take the film as a straightforward confrontation between animal and human would be just as large a mistake as assuming dogs are neither more nor less than, as the outdated saying would have it, “man’s best friend.” 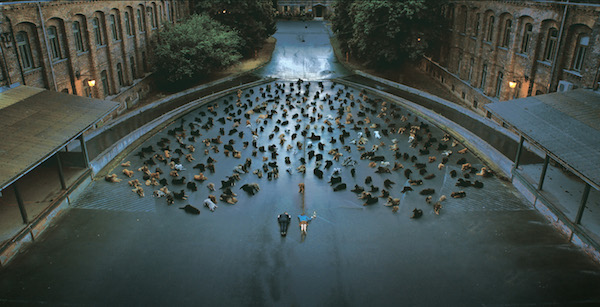 Set in Budapest, White God could easily play itself out in any European, or even prosperous “Western” city, where generally comfortable and unquestioned living seems threatened only by the minor emotional tragedies of secure human existence: romantic relationships gone bad, parent-child alienation and battles of will, teenage snark and navigation through a welter of burgeoning hormones. In the midst of this apparently more or less untroubled scenario are the thirteen-year-old Lili and her dog, Hagen. The duo is thrown upon the not-so-good graces of her divorced father, Daniel, while her mother and apparent colleague-cum-boyfriend attend a conference in Australia for three months. Right away, Hagen’s presence becomes a problem; Lili’s father claims he won’t have him in his house, and after the trio arrive at Daniel’s apartment, a snooping neighbor makes it plain that mixed breeds aren’t welcome in the building, and need to be registered. The demand is backed up by an animal control officer, who drops by to warn Lili’s father that he’ll have to pay a fine to keep the mutt, a demand that Daniel forcefully refuses. Although Lili attempts to save Hagen by running away and keeping her pet in constant sight, her father finally catches up with them, and despite his daughter’s protests, dumps the dog beneath a highway overpass.

As you might be wondering at this point, why the title? As Hagen– who shares a name with a half-elfin figure in some versions of the Niebelungen– goes through his own odyssey of danger, exploitation, violence and survival, it becomes more evident that this film is more than just a plea or a warning not to take your pets for granted. Chased by the powers-that-be– including animal control and spiteful butchers– betrayed by a homeless beggar who sells Hagen into the hands of dog-fighters, the plight of the onetime pet embodies the experiences of “the least of these:” the mixed breeds, the undocumented, the unwelcome strangers harried from one hidden and exploited existence to the next, unprotected by a state that at best will only tolerate their presence if they provide some revenue or public entertainment.

It’s a world made increasingly dangerous for this population of late with the rise of Hungary’s Jobbik Party, and a general European upsurge in right-wing politics and anti-immigrant and anti-Semitic rhetoric and deeds. This tale, then, of mistreated and outcast animals finally deciding they’ve had enough, and doing more than biting the hands that have (sometimes) fed them, should cause complacent ruling populations to look up from their assumptions that the “guests” among them are only too happy to receive whatever scraps from their table the masters will allow them– assumptions that may also harbor the deep fear, as seen in many of those right-wing voices, that those very guests will rise up and wreak havoc against the masters they’ve served. Indeed, Mundruzcó’s director’s statement makes explicit the fact that the film was “inspired mostly by increasingly rancorous present-day social relations,” and was intended to “criticiz[e] our detestable self-confidence, full of lies and lopsided truths, set on domesticating the minorities while actually wishing only to destroy them.” 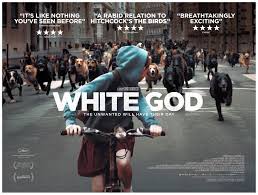 But back to the plot. Hagen wanders the streets, alone and scared, until he’s taken in by a group of other mixed-breed dogs. There, in the midst of the city’s trash heaps, he finds friends and learns how to survive the attacks of animal control. But without protection and always having to search for food, Hagen and his companions are constantly in danger. He is betrayed by the humans around him, even those who should be sympathetic to his plight, and is captured by people who will abuse him unabashedly. In his new prison, Hagen discovers even more dogs, those capable of earning profit for their enslavers, and is now subjected to a brutal, mafia-controlled world of utmost violence and exploitation: the world of dog fights.

Checking back in on Lili, we find that she’s gradually abandoning her initially determined search for her dog. The tween has other things to think about: her upcoming orchestra concert, for one. Before Hagen was expelled from the household, she used to comfort him by rehearsing her trumpet part from Liszt’s Hungarian Rhapsody No. 2. Although she and the rest of the orchestra are diligent about preparing for the performance, a group of the kids heads to a club instead of the performance of Wagner’s Tannhäuser they’ve been instructed to attend. Discovered at the club drunk and passed out on the floor, and carrying her friend’s drugs, Lili’s close brush with the law and other potential dangers brings her and her father closer together, an experience that even prompts Daniel to offer to get her another dog. But, realizing now that she has to stop her frivolous outbursts, Lili lets go of old loyalties when she declares in response, “I don’t want a dog.” Teenage troubles successfully navigated, father and daughter get down to the practicalities of conventional living, where Hagen is just a lost memory.

Meanwhile, on the other side of town, on the point of being euthanized by animal control, Hagen, now in the hands of the state, but still alive, uses the fighter’s training into which he’s been forced, and attacks workers at the pound, freeing his canine comrades in the process, and leading the pack through the city on a revenge mission, one that involves killing everyone who’s betrayed or ill-used him or his dog-comrades. Some of his victims don’t even realize they’ve done anything wrong; the man who trained him to kill for sport and money, on seeing his winning fighter, shouts with deluded joy and relief, with the fatal expectation that Hagen (whom he’s renamed Max) will run thankfully back into the generous sponsorship of his open arms. By the time the pack reaches the butchery, it’s left a trail of premeditated blood and death from one end of Budapest to the other, and has interrupted the orchestra concert and emptied the streets of terrified residents in the process, in an inevitable and fantastic reference to Hitchcock’s The Birds.

But, still believing Hagen will be loyal to the end, in spite of having come face to face with his slaughtered victims, Lili is convinced she can stop the massacre, and goes out to confront the pack when they show up outside the butchery. The girl soon gets schooled in the complexities of social relations, mass dissatisfaction, and naïve notions of friendship; as she talks to him, Hagen continues to growl and show his teeth and creep toward her, unconvinced by the easy words that once succeeded in securing his loyalty. Right as we think Lili is doomed, she brings out her trumpet, shakily playing the Liszt melody she’d once used to soothe Hagen at night. Unconvinced by the same old words, the music brings the dog up short, maybe causing him to remember something good from the past. As he sits, and eventually lies, on the ground, the rest of the pack follows, submitting to a pacifying musical reminder of national beneficence and final power.

Once finished with the serenade, that subduing influence also has Lili, and even her father, who’s told his butcher colleague to hold off on calling the police, lying on the ground before the dogs, in a gesture where all adversaries are now facing each other as equally vulnerable equals.
And that’s where Mundruzcó leaves us, ending the film as we wonder what will follow in the wake of this pacified moment of mutual acknowledgment. Having established some sort of agreement between the opposing sides, will they be able to go forth in friendship on the somewhat-clean slate made possible and provided by the Hungarian Rhapsody– or the culture and state it represents and by which it was inspired?

Will the State be a large enough place to recognize the value of all of its inhabitants, including the mixed breed and the so-called purebred, or will some or all of them have to submit to that fearful State’s ideals of how true citizens should act, either killing those who do not qualify as pure, or bringing the chastised dogs back into the obedient fold of newly humbled, but basically unchanged, human households? Will the scary-hating State allow itself to be transformed by animal and human mixed breeds, serving not as an enforcer of a proper pure society, but rather, as an enabler of open relationships and a gathering place for new forms of inclusion and interdependence between mixed human/animal breeds?

Mundruzcó’s “criticism of a once and future Hungary” should have us trying at the very least to understand how our societies, fearing the arrival of the other, are establishing intransigent laws that create necessary disconnection, keeping and sustaining both the white God we serve, and our own complicity in propping up his reign of purity.