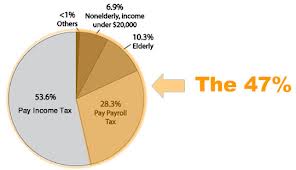 Rabbi Matt Soffer wouldn’t call himself a member of the “47 percent,” but according to the description of the group offered by Republican presidential candidate Mitt Romney in a leaked video this week, Soffer probably qualifies.

An assistant rabbi at Temple Israel of Boston, Soffer said his Jewish faith teaches him that people are entitled to food and housing, and that he proudly believes “the notion that there is public assistance for those in need is unequivocal in Judaism.”

Soffer spends much of his time on interfaith efforts related to the environment, poverty and housing issues in the Boston area. So he listened with interest when a controversial video of Romney surfaced in which the candidate said 47 percent of Americans will vote for President Barack Obama because they are “dependent on government” and “believe that they are entitled to health care, to food, to housing.” In the same video, Romney added that he could never convince those voters that “they should take personal responsibility and care for their lives”

Soffer, 32, said in an interview that he would not explicitly support one candidate or the other because he works for a religious nonprofit that’s not legally allowed to endorse candidates. And while he is not financially struggling or heavily dependent on government programs, he’s just three years into his career as a rabbi and has a modest salary. Much of his earnings go toward paying off hefty student loans he amassed while attending New York City’s Hebrew Union College-Jewish Institute of Religion.

His costly academic and spiritual journey toward becoming a rabbi is just one reason he has come to view Jewish teachings on poverty and government assistance as largely clear.

“Giving to people who are in need in Hebrew is called Tzedakah. It’s an obligation and everyone has to do it, even those who have very little. Even those getting Tzedakah have to give Tzedakah,” he said. “Judaism does hold an internal debate about how there are some ways to provide assistance that are better than others. Teaching someone a craft and enabling them to sustain themselves is the highest form of giving, but it is still an obligation to give food to anyone who is hungry and give shelter to anyone without a home.

“In Jewish terms, there are some things in society we want to have in place for the sake of our own civic and moral integrity. For example, health care, in Jewish terms, is a right, not a privilege,” Soffer said. “One of the greatest Jewish thinkers, Moses Maimonides, wrote about things to set up when you create a new town, and the doctor was on the top of the list.”

As a rabbi, Soffer encourages his congregation, which follows the Reform tradition and meets in a Boston neighborhood teeming with colleges and medical schools, to give to the needy and to expect nothing in return.

During Rosh Hashanah, the Jewish New Year that was celebrated earlier this week, Soffer and his fellow rabbis put a brown paper grocery bag by the seats of each family that came to services. “We said that when they come back, it should be full with nonperishables” to give to the Greater Boston Food Bank, he said.

Soffer said collecting food for the hungry was not only a practical matter to aid struggling Bostonians, but also a religious obligation.

“The Torah says everyone should leave a portion of his or her field [for others]. There’s a law that says anything you drop while gleaning your field or anything you forget you cannot go back for. In essence, it’s no longer yours. It belongs to the stranger, the widow,” he said. “These laws are a kind of protest against the ubiquitous concept of ‘mine.’ Not everything in one’s field is one’s own. We are trying to urge people to see these things.

“I see myself as part of the 100 percent. I see the 53 percent as part of the 47 percent,” he said. “My understanding of citizenship is that we are all in this together.”