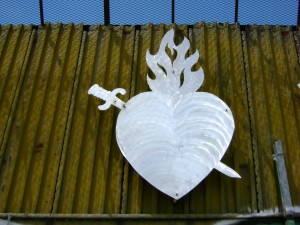 LOUISVILLE – Kentucky Presbyterians are working with other faith and humanitarian groups to oppose a state immigration law patterned after the controversial measure adopted last year in Arizona.

On Feb. 8, a broad coalition of groups is holding a rally at the state capital — Frankfort — to mobilize opposition to the pending legislation, which has passed the State Senate but which appears doomed in the House of Representatives. The bill was introduced by State Senate President David Williams, a Republican who is running for governor next year. The Kentucky Senate is controlled by Republicans, the House by Democrats.

In condemning the Arizona statute as “unfairly targeting Hispanic Americans,” last summer’s 219th General Assembly of the Presbyterian Church (U.S.A.) voted by a better than two-to-one margin to “refrain from holding national meetings in states where travel by immigrant Presbyterians or Presbyterians of color might subject them to harassment or racial profiling.”

In a Jan. 7 letter to the Kentucky State legislature, the Rev. Gradye Parsons, General Assembly stated clerk; and Linda Valentine, General Assembly Mission Council executive director, said that while the PC(USA) supports comprehensive immigration reform at the federal level, the proposed Kentucky legislation (SB6) “is counter to the Gospel of Jesus Christ” and “would have a chilling effect on the work and worship of churches and entire communities.”

They added that the General Assembly’s action would preclude PC(USA) meetings and gatherings in Kentucky.

PC(USA) congregations are also taking action. On Jan. 26, the session of Crescent Hill Presbyterian Church in Louisville adopted a resolution, saying it opposed SBC because it would:

The Rev. Tony Aja, coordinator for Hispanic/Latino Ministries for Mid-Kentucky Presbytery, said that the bill would have far-reaching consequences for the church’s work and ability to build relationships.

“If passed, this legislation not only would create havoc and distrust in all our immigrant communities, documented or not, but it would also jeopardize the ability of church people to minister with our new neighbors and be true to the gospel’s imperatives,” he wrote in an e-mail.

The Kentucky Council of Churches — whose executive director is the Rev. Marian McClure, former director of Worldwide Ministries for the PC(USA) — has also come out in opposition to SBC, as have the state’s Catholic bishops.

The full text of the letter from Parsons and Valentine:

The national office of the Presbyterian Church (U.S.A.) has been located in Louisville, Kentucky since 1988. Upon moving to Louisville, we were welcomed and accepted as an important part of this community. It has been a tremendous honor to live and to do ministry in a city and state that shares our value that there is not room in the church or in the community for discrimination against any person.

While the denominational seat is located in Louisville, our local churches are spread across the state in rural communities like Hazard and Mayfield and in urban centers like Louisville and Lexington, as well as across the country. We strongly believe that wherever the church is located, it is the hands and body of Christ, called to minister to, and be a house of worship for all God’s people. We are led by Presbyterians of all nationalities, genders, races, ages, and ethnicities who have been called to minister in their local community.

This call includes worship and social programs such as food pantries, community kitchens, English as a Second Language classes, and mentoring programs. We do not ask the immigration status of those with whom we worship or serve because we wish to live a community that sees past a person}s immigration status to see the face of God.

The Presbyterian Church (U.S.A.) supports comprehensive immigration reform at the federal level, enforceable by federal authorities. However. We are concerned about the recent proposed legislation, SB6. This legislation is counter to the Gospel of Jesus Christ and puts at risk not only members of our congregations but the people of the communities in which they serve.

If adopted, SB6 would have a chilling effect on the work and worship of churches and entire communities. Local police departments would divert resources to these civil immigration violations rather than focusing on keeping communities safe. The perception of the police among immigrant communities would fundamentally shift, creating an environment of fear where crime would go unreported and victims unassisted.

While it is a joy for us to share this city and state with Presbyterians from around the world, if SB6 is adopted, we would no longer be able to host our national meetings in Kentucky. In a single year, our offices host over 100 meetings resulting in thousands of people traveling to Louisville, staying in area hotels and eating in local restaurants.

However, our commitment to justice, fairness, and solidarity with those persecuted by unfair laws led our 2010 General Assembly to adopt a resolution that calls us to refrain from holding national meetings in states where laws exist that might subject our guests to harassment or intimidation.

Louisville has hosted our biennial General Assembly meeting (3,000 attendees), our triennial Presbyterian Women’s Gathering (5,000) and many other Presbyterian Conferences. If SB6 becomes law, Louisville could no longer be considered as a venue for these events. This would undoubtedly negatively impact Kentucky’s economy, especially in the Louisville area.

SB6 is harmful to all Kentuckians and our guests, especially as we work to create an atmosphere of acceptance and tolerance. We urge you consider the impact this proposed legislation would have on the people and economy of Kentucky and oppose this legislation.