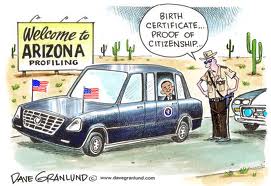 The Supreme Court has upheld the most controversial aspect of the anti-immigrant legislation adopted in Arizona. Section 2(B), the provision that permits officers conducting a stop, detention, or arrest to verify the person’s immigration status, was the only section challenged under federal preemption theory upheld by the Court.

As lawyers and advocates sift through the opinion to determine its impact on state immigration laws, the Reverend Gradye Parsons, Stated Clerk of the Presbyterian Church (U.S.A.), is concerned with how the church will minister to families in states like Arizona. Parsons commented, “Right now, the most important issue is responding to the pastoral needs of those unsure about how this decision will affect their families.” He added, “We will work with local congregations and Presbyteries to ensure that communities have reliable and accurate information to make the best decisions for their families.”

This law creates an environment where some are more closely scrutinized and viewed as suspicious, and this worries many immigrants and advocates. Hostility in communities that is sanctioned by law creates an environment where immigrants are not welcomed, which is antithetical to the gospel. The Constitution of the Presbyterian Church (U.S.A.) calls the church to be open to the future to which God is drawing us, which includes church membership and welcoming all people regardless of worldly conditions. By denying the full humanity and rights of a segment of the population in the United States in the eyes of the law, Christians forget the stories of migration of their faith ancestors.

The Rev. J. Herbert Nelson, Director of the Office of Public Witness, stated, “The spirit of the Arizona law and others like it robs this country of the gifts immigrants bring to our communities and congregations by encouraging the public to look upon our sisters and brothers with suspicion and, in severe cases, disdain. This suspicion of individuals perceived to be immigrants also does harm to American citizens as we deny our interdependence on one another. This causes us to forget that we, too, were once strangers in this land.”

Presbyterians have a long history of commenting on and advocating for immigration reform and ministering to immigrants suffering as a result of the restrictive laws. The General Assembly of the Presbyterian Church (U.S.A.) has continued this tradition by calling for the House and Senate to work together to develop laws that meet the needs of immigrant families and this country. The Arizona law and others like it are in conflict with General Assembly policy that opposes local enforcement of immigration laws and calls for immigration laws that uphold family unity and individual dignity.

Nelson said, “Section 2(B) can be interpreted to encourage racial profiling and this profiling does violence to the image of God that all people bear. I remain hopeful that this section of the law will eventually be struck down.”

While for now the law is uncertain in the long term, Parsons stated, “Sometimes government laws can be in conflict with the gospel. Therefore, it is important for people of faith to think critically about the elements of a just law and how to respond to injustice. The General Assembly of the Presbyterian Church (U.S.A.) and other denominations and faiths have signed onto the Interfaith Platform on Human Immigration Reform. We remain committed to the factors set forth in the Platform, which we regard as just and necessary to meet the needs of our country.”

The Presbyterian Church (U.S.A.) is working with our inter-faith partners to develop an appropriate faith-based response to move immigration reform forward and support local congregations and Presbyteries working to address the needs of their local communities in light of the Court’s ruling.