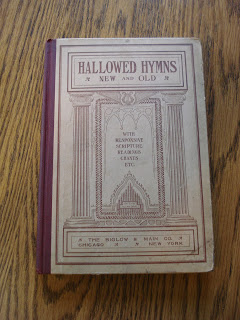 In a workshop I led recently, as we were discussing the future of a church’s worship program, a women in her eighties said, “but what about the older people like me – we need to be preparing for eternity” She was expressing her concern that her church might stop playing the hymns with which she was familiar.

She was telling the younger worship leaders present that she needed to be singing the hymns that meant something to her. What was going to prepare her for eternity if not the hymns of her youth? Earlier this woman had told me that she played piano as a girl – she grew up in rural Ohio. “We didn’t have a telephone,” she told me to emphasize just how rural it had been. “But I had the hymn book and I played all the hymns. I don’t suppose people would do that today.” she had said with a smile. Her comment reveals the connection between congregational singing and pastoral care.

I don’t know if this woman was simply saying she found comfort in the hymns of her youth or if she was saying something more. But she is right that the images of eternity with God in the Bible certainly involve a lot of singing. And if we are to be reunited in glory with the saints who have gone before, perhaps they will still be singing the songs they learned as children. So getting back into hymn singing shape might be a good way to prepare for eternity. I suggest “When the roll is called up yonder” might be a good place to start.

Please check out Peter Slade blog, it is a great resource to think about music, singing and the Christian faith.