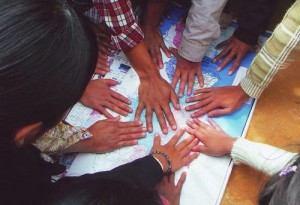 “We believe in change and ask that you continue to pray for us.” This was the message an international team of church representatives heard again and again, as they visited people and churches in Myanmar recently.

The group, which included Christians from Bangladesh, Canada, Australia, Norway and the United Kingdom, was travelling as “Living Letters” on behalf of the World Council of Churches (WCC).

The Living Letters team, hosted by the Myanmar Council of Churches, visited Myanmar between 28 October to 3 November, shortly before the country held elections for the first time since 1990.

As they met with Myanmar member churches of the WCC as well as partner organizations and civil society movements, the team learned first hand about the churches’ witness to just peace despite the nearly four decades of military rule in the country.

The call for peace and justice is not an easy one to convey, the team was told, especially as churches there strive to support their communities in times of political and economic difficulty.

One of the poorest countries in South East Asia, Myanmar has seen a rapid degradation of its economy and environment. It is within this context that churches work ecumenically to provide assistance to communities in need.

Often working with the “poorest of the poor”, the churches are confronted daily with the realities of communities that are on the receiving end of decades of poor macroeconomic management, isolationist policies and trade sanctions.   The issues they tackle range from the internal displacement of people, relief and resettlement, water security, HIV and Aids, to violence against women and children.

Despite such challenges, the churches retain a spiritual vibrancy and hope for the future that remains a powerful witness to a country in flux.

The general election which was held 9 November amid boycott calls by the dissident National League for Democracy (NLD) and a crescendo of international criticism of the poll process did not yield a hoped for change in the political landscape.

Instead the ruling elite maintained most of the power. One hopeful outcome, however, was the 13 November release of pro-democracy leader Aung San Suu Kyi who had been under house arrest for a decade and a half.

Churches are conveying a clear message to their membership that they have an important role to play in civil society promoting peace within Myanmar. They are also seeking to provide opportunities for ongoing dialogue and reconciliation in contexts of violence and conflict.

During the Living Letters visit, WCC member churches in Myanmar reiterated their commitment to the movement for Christian unity and encouraged the WCC fellowship to stand in solidarity with their churches.

Noting their relative isolation to the outside world, the Myanmar Council of Churches called for more opportunities for mutual encounter and learning. This desire for closer relations was also palpable when the international visitors met with the Rev. Dr L. B. Siama of the Mara Evangelical Church.

The church, which is located in a remote, underdeveloped corner in the northern part of the country, joined the WCC in 2001, becoming its fourth member church in Myanmar. “We want to walk hand in hand with ecumenical brothers and sisters around the world – drawing strength from each other,” Siama, principal of the Mara Evangelical Church’s Lorrain Theological College, told the Living Letters team.

Tara Tautari is a programme executive in the World Council of Churches general secretariat. She is a member of the Methodist Church of New Zealand.