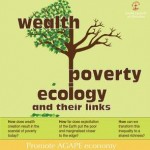 A Background to the Study Process

“Look, Lord!   Here and now I give half of my possessions to the poor, and if I have cheated anybody out of anything, I will pay four times the amount” (Luke 19: 8).

The biblical story of Zacchaeus introduces this working paper on the study process entitled “Poverty, Wealth and Ecology: The Impact of Economic Globalization” within the World Council of Churches’ programme on “Public Witness: Addressing Power and Affirming Peace” (P3). The purpose of this paper is to spell out a framework for the proposed study and its envisaged outcomes for use of staff, researchers and the World Council of Churches (WCC) Reference Group on poverty, wealth and ecology. At the 9th General Assembly of the WCC held in Porto Alegre in 2006, it was proposed during the Ecumenical Conversation that had focused on “the scandal of poverty” that churches and partners in the ecumenical movement embark on such a study process to address the dearth of reflections and analysis on wealth and how wealth creation is related to poverty and ecology.

Building on the results of the earlier process on Alternative Globalization Addressing People and Earth (AGAPE) which began at the 8th Assembly of the WCC in Harare, the current phase of the study process will lead up to the 10th Assembly of the WCC in 2013.  It will engage churches and specialized ministries in a consultative research on poverty, wealth and ecology, which will be undertaken in all continents following an established ecumenical calendar.2 It will contribute to the ecumenical history of the “Life and Work” movement in developing social ethics on economic life.  It will draw energy from previous ecumenical theological and ethical reflections which were done through the programmes on Church and Society, Diakonia and Service, as well as the Justice, Peace and Integrity of Creation process.

Economic concerns have emerged as a divisive issue for the churches. The AGAPE process in particular revealed that many of the old North-South tensions and conflicts remain. Differences in analyses and recommendations among churches and ecumenical partners stem largely from divergences in ideological standpoints that are, in turn, determined by social and historical locations. This underlines the need for a genuinely open, connected and critical dialogue on poverty, wealth and ecology.  It is therefore envisaged that this study process will enhance understanding and synergies among churches and the ecumenical family so as to fulfill the threefold vision of the WCC of living out Christian unity more fully, being “neighbors to all” and taking great care of creation.3

The major achievement that this project will have contributed to by 2013 is to have provoked a shift in churches’ understanding and actions on poverty, wealth and ecology.  Churches would have reflected on the issue by proposing a definition of a greed line’ to stand next to the poverty line.’4  Additionally, the WCC together with ACT Development will produce an Ecumenical World Report on Poverty and Wealth to complement the development reports published by the United Nations Development Programme (UNDP) and the World Bank. The biennial ecumenical report will reflect on the concrete experiences of people in local contexts and will include ethical reflections and analysis of the experiences of poverty and wealth – rather than focus on presently available socio-economic statistics.

Read the full text of the working paper as a pdf (83 KB): http://www.oikoumene.org/fileadmin/files/wcc-main/2007pdfs/PWEstudy_process_background.pdf

1 For the biblical interpretation of the encounter of Jesus with Zacchaeus, the homily used by Rev. Dr Samuel Kobia, General Secretary of the WCC, at the Inter faith Congress on Peace, organized by the Community of St. Egidio, in Naples, Italy, 23 October 2007, has been used.  It is written with resources from Rev. Dr. Geiko Müller-Fahrenholz, Consultant, International Ecumenical Peace Convocation, Decade to Overcome Violence, WCC.
2 See attached annex.
3 See WCC Programme Plans, 2008-2013, 30 April 2007, pp. 9-12.
4 See Michael Taylor (2003), Christianity, Poverty and Wealth, APRODEV and WCC: Geneva.