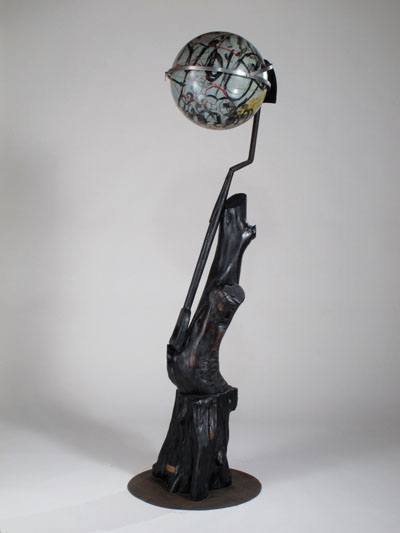 All my personal and professional life I have made an effort to reach out to the Divine through the arts. While at school in a convent in India, it was comfortable and made complete sense to go to church and pray–“Lord make me an instrument of Thy Peace// Where there is hatred, let me sow love.” At home there were numerous images of various Hindu Gods and the celebration of religious festivals was full of color and fun. I intimately mingled with my Muslim friends and became increasingly fascinated with their culture. Listening to the chanting in the morning from the Sikh gurudwara (place of worship) was part of my daily life. My Buddhist school friend opened another door to a world of simplicity, showing me another path of enlightenment. At that time, the religious practices of a Jain friend seemed hard to imbibe but certainly piqued my admiration. All these disparate threads of religious beliefs and cultural practices, unconsciously, played an important part in my development not only as a human being but in my eternal search for an ideal–a just and peaceful world.

Today, living in U.S.A., my adopted country, while my personal world is in unison, I am even more convinced of the need for interfaith understanding, as the external world seems to be tearing apart under the notions of religious strife and senseless violence.

We live in a multicultural society, ruled by technology, in which contact among different faiths is inevitable. As individuals we are constantly challenged to live in harmony with people from different faiths and backgrounds. The dilemma is how do we conceive of God today? How do we combine the practical everyday life with our own personal religious beliefs? I personally have found the answer in sharing multicultural expressions through the arts. Poetry especially, heals and compels us to study the human situation from various perspectives. Through the ages poets from different religious faiths have expressed their love for the Divine:

Thus wrote Hazrat Rabia Basri in the eighth century, perhaps the first female Sufi saint who dedicated her life to exploring the true meaning of prayer and the doctrine of divine love. She followed the mystic path and was the first to practice the complete and selfless love for God. Her poetry rings true today with its pure and simple affirmation of divine love. The 13th century Persian poet Mewlana Jalal-ud-din Rumi, perhaps the best known Sufi poet in the West, expressed through his poetry a yearning for the Divine, a soul-searching for the Whole, the Complete. He proclaimed the Sufi path and in 2005 UNESCO proclaimed the Mevlevi Sema ceremony of Turkey as amongst the Masterpieces of the Oral and Intangible Heritage of Humanity.

Amir Khusrau, the Indian mystic poet, composed his works in Persian and Hindavi. His poetry has rich examples of the religious, cultural and aesthetic values of 13th century India. Kabir in the 14th century, one of the saints of the Bhakti (devotion) and Sufi movement, inspired the great scholar, Nobel laureate Rabindranath Tagore. His work is based on simplicity, honesty and the inward worship of God. He criticized dogmas and creeds and preached the simple path to God. His dohas (couplets) and short stories are popular today and often quoted by young and old. His compositions figure in the Sikh scriptures–the Guru Nanak Granth Sahib:

Love the saints of every faith:
Put away thy pride.
Remember the essence of religion
Is meekness and sympathy

In the 16th century Meera Bai, a Hindu princess, spread the teaching–love of God alone is true and eternal all else is ephemeral. The Mughal Emperor Akbar, himself a practitioner of religious tolerance, knelt at her feet in respect and admiration. The poetry of Bulleh Shah, a Sufi poet in the 17th c. who wrote in Punjabi, is recited today and is an important part of the traditional repertoire of qawwali–a genre of music that represents the devotional music of the Sufis:

You have learnt so much
And read a thousand books
Have you ever read your Self?
You have gone to mosque and temple,
Have you ever visited your soul?

In our own times, the unpredictable technocrat, former CEO, Steve Jobs, philosophized towards the end of his life–“different religions are different doors to the same house. Sometimes I think the house exists, and sometimes I don’t. It’s the great mystery.” Today I realize that my dream is also the American dream–a world of peace and harmony, of religious and cultural plurality–a dream we all need to protect and preserve.

Just this year, Dr. Akbar Ahmed, renowned scholar, playwright, diplomat, Ibn Khaldun Chair of Islamic Studies at the American University, Washington, D.C. published his latest book on poetry “Suspended Somewhere Between.” The Oscar-nominated actor/writer Daniel Futterman, in his Foreword, has called Dr. Ahmed “a national treasure.” Walking in the footsteps of great Sufi poets Dr. Ahmed expresses “primal emotions that are universal.” His poetry touches the heart and soul while reflecting on the past with memories of the partition of India. It speaks to the present generation and will live on for generations. The title is derived from the poem and reflects the challenges we face as individuals in balancing our desire for material prosperity and spiritual well-being.

A special event is planned at the Gandhi Memorial Center in Washington, D.C. centered on the reading of Dr. Ahmed’s works. There will be an informal intellectual exchange between the readers, the audience and the poet. This event is a perfect example of pluralistic America at its best. Mahatma Gandhi preached and practiced unity–You must not lose faith in humanity. Humanity is an ocean; if a few drops of the ocean are dirty, the ocean does not become dirty. At this most appropriate venue, people from diverse backgrounds and faiths can collectively contribute towards a unified voice of the Universal Truth.

One of my favorite poems from the collection is:

I am on a journey
With others walking alongside
Some taking the help of imams and ayatollahs
Others the law of Moses or the love of Jesus
Yonder I see those who find the divine in the Ganges
Or on top of the Himalayas
They find the divine in the noble doings of Lord Ram
Yet others find other paths
I wish them all Godspeed
For all of them are part of the “nations and tribes”
That the Quran tells me I must love
So that I can love my God.

All these thinkers have a common thread–a nameless devotion to the Supreme, message of unity and belief in the equality among humankind. In our present world of political gymnastics, economic stress and brutal violence, poetry is the panacea!

The event at the Gandhi Center is just another step and we hope to continue this important dialogue on interfaith understanding and acceptance during the two-day symposium at the Smithsonian Institution in Washington, D.C.: “Sufism at the Smithsonian: Searching the Divine through the Arts”–scheduled for Sept. 2012.

Manjula Kumar is the Program Director of the Smithsonian Institution. She is an educator, director, actor, and activist with a strong belief in the arts as a vehicle for promoting peace and harmony. Through her numerous productions she has tried to build bridges of cross-cultural understanding between diverse communities. She is the recipient of the 2009 Gandhi Fellowship of Peace Award. Born in Kolkata, India, educated in Delhi and London; now in her third incarnation, she lives and works in the Washington Metropolitan area.