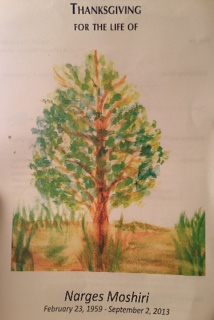 Once upon a time, long long ago, there was a mother and her daughter Phoebe who lived in a small cottage by the woods. Though they were poor, they were happy and loved each other dearly. Each morning the mother would rise from her sleep and prepare sweet porridge for them to eat and all the while she would sing:

Phoebe in a rosebush
Phoebe in a tree
There’s many a Phoebe in the world
But you’re the one for me.*

And after they finished their breakfast, Phoebe would help her mother with her house-work. They worked all morning until the little cottage was neat and clean and shone like the golden sun. Then mother would put a loaf of bread and a jug of water in a basket which she had lined with a pretty white cloth. This she gave to Phoebe to take with her into the woods. All day Phoebe would play in the woods and gather sweet berries for their supper. The animals who lived in the woods were not afraid of her, nor were the birds. The little hare would eat a leaf out of her hand, the deer ran merrily with her, and butterflies danced around her. And when she lay down to rest, the birds would sing their sweetest songs to her.

One winter’s day the mother did not feel well and so she stayed in bed. Phoebe went about doing the house-work until the cottage was neat and clean just as her mother had taught her. Mother looked at Phoebe with kindness and knew that no harm would ever come her way. She called Phoebe to her side and told her that the time had come for her to return to the heavenly kingdom. “Do not worry my dear child” said the mother “though you may not see me, I will always watch over you. Listen for me in the sounds of the woods.” And with these last words, Phoebe’s mother closed her eyes and died.

The kind people in the village helped Phoebe bury her mother under the poplar tree next to the cottage. And as she sat by her mother’s grave, Phoebe sang:

The days passed and Phoebe lived alone in the small cottage. Every morning after breakfast of sweet porridge, Phoebe would busy herself with the house-work until the cottage was neat and clean and shone like the golden sun. Then Phoebe would put a loaf of bread and a jug of water in a basket which she had lined with a pretty white cloth to take with her into the woods. All day Phoebe would play in the woods and gather sweet berries for her supper.

One spring day Phoebe was walking in the woods. Her heart was full of sadness when a tear rolled down her cheek and fell upon the ground. She bowed her head and there on the ground she saw a small egg. She picked it up and said: “Dear little egg all alone in the world.” And she wrapped it carefully in her kerchief and walked home. Phoebe took great care of the egg and kept it warm until one day she heard a crack, crack, cracking sound. She ran to her room and there on a table a small bird had hatched from the egg. Phoebe fed the bird for many days until one day the bird’s feathers had grown long enough for her to fly. Phoebe opened the cottage door, the bird flew out and settled on the poplar tree and sang: “Fee bee, fee bee, fee bee…”.

Phoebe in a rosebush
Phoebe in a tree
There’s many a Phoebe in the world
But you’re the one for me.

* Rhyme from Catch Me & Kiss Me & Say It Again, Clyde Watson
**Poem by George