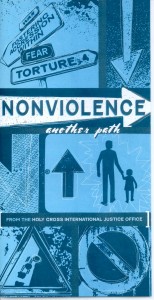 In light of Osama bin Laden’s death on May 1, Presbyterian ministries here have had reason to reflect anew on denominational statements and studies on terrorism, war and the continuing call for peace.

The Rev. Gradye Parsons, stated clerk of the Presbyterian Church (U.S.A.), encouraged the offices of Theology and Worship and Compassion, Peace and Justice and the Advisory Committee on Social Witness Policy to share the following resources for prayer and reflection:

From Theology and Worship

A prayer for the reign of peace:
Almighty, all-merciful God,
through Christ Jesus you have taught us
to love one another,
to love our neighbors as ourselves,
and even to love our enemies.
In times of violence and fear,
let the peace of Christ rule in our hearts,
so that we may not be overcome with evil
but overcome evil with good.
Help us to see each person
in light of the love and grace
you have shown us in Christ.
Put away the nightmares of terror
and awaken us to the dawning
of your new creation.
Establish among us a future
where peace reigns,
justice is done with mercy,
and all are reconciled.
We ask these things
in the name and for the sake
of Jesus Christ our Lord.

“Do not rejoice when your enemy falls, and let not your heart be glad when they stumble.” — Proverbs 24:17

“Repay no one evil for evil, but take thought for what is noble in the sight of all. If possible, so far as it depends upon you, live peaceably with all. Beloved, never avenge yourselves, but leave it to the wrath of God; for it is written, ‘Vengeance is mine, I will repay, says the Lord.’ No, ‘if your enemy is hungry, feed him; if he is thirsty, give him drink; for by so doing you will heap burning coals upon his head’ [Prov. 25: 21-2]. Do not be overcome by evil, but overcome evil with good.” — Romans 12:17-21

(The governing authority will approve good conduct) “for it is God’s servant for your good. But if you do what is wrong, you should be afraid, for the authority does not bear the sword in vain. It is the servant of God to execute wrath on the wrong-doer.” — Romans 13:4

“As he came near and saw the city, he wept over it, saying, ‘If you, even you, had only recognized on this day the things that make for peace! But now they are hidden from your eyes.’” — Luke 19:41-2

Comment on the death of Osama bin Laden, drawing on the policies noted: Overcoming evil with good:

This is the first recommendation of the General Assembly’s 2004 Resolution on Violence, Religion, and Terrorism, and one very appropriate to this Easter-tide.

“The Church bears witness to Christ when it nourishes the moral life of the nation for the sake of peace in our world,” says the 1980 policy statement, Peacemaking: The Believers’ Calling.

At this time, many Christian commentators have lifted up the words of Proverbs 24:17 and Romans 12: 17-21 to guide responses to the death of Osama bin Laden, killed by a U.S. special operations forces team in Abbottabad, Pakistan, on May 1. President Obama’s somber tone in making the public announcement was appropriate to the mark the death of any human being, however great their crimes, and however much relief and catharsis was shown by crowds.

Partly in line with the approach to terrorism recommended by the 2004 Assembly, the action to kill bin Laden reflected careful intelligence work and, as reported, did not itself inflict death to civilians or non-combatants. General Assembly statements since 9/11, while resolutely opposing terrorism by individuals, non-state groups and states, and grieving with the victims of terrorism, have also steadily advocated addressing terrorism as a crime and not a cause for war.

The death of bin Laden does not itself mean an end to terrorism, but the Arab Spring — the largely non-violent outpourings of hope for freedom in Tunisia, Egypt, Libya, Syria, Yemen, Bahrain, Jordan and Palestine — has had little role for Al Qaeda. In this sense, Osama bin Laden was eclipsed by the brave demonstrators who have shaken tyrants and changed the direction of history. Again, in listing still-embattled countries, it is clear that both tyrannies and violent interpretations of jihad will continue to exist, as will resentment of Western influence and use of military power.

Since 9/11, several Assemblies have called for the United States to withdraw its forces from Iraq and Afghanistan, based on evaluations of the causes, conduct and consequences of these wars in terms of “just war” and “just peacemaking” criteria. The latter criteria have a broader meaning but have been used to evaluate wars intended or justified as “humanitarian intervention,” such as the current NATO campaign in Libya.

The targeted killing of bin Laden was termed by President Obama “the most significant achievement to date in our nation’s efforts to defeat Al Qaeda.” If this is the case, and if there are few Al Qaeda operatives remaining in Afghanistan, then it is a strong argument for ending large scale warfare and garrison operations in both Iraq and Afghanistan. This might help in the overcoming of evil with good.

Among the comments on the death of bin Laden, the Secretary General of United Nations, Bak Ki-Moon, stated on May 2: “This is a day to remember the victims and families of victims, here in the United States and everywhere in the world.” Those victims would include those lost in the earlier World Trade Center bombing in 1993, the bombing of the destroyer USS Cole and the U.S. embassy bombings in Tanzania and Kenya. But the overwhelming number of deaths have been civilian Iraqis and Afghans, with additional large numbers of soldiers, Iraqi, Afghan, American, and members of NATO coalitions.

The full costs of two ongoing wars, then, include the lives of these victims and those wounded. The General Assembly has pointed to the unequal sacrifices borne by our professional military families, and the need for massive reconstruction in Iraq and Afghanistan. The Assembly has, in its statements on torture, focused on the violation of Christian and national principles, the damage to the reputation and credibility of the United States, and the dangers of an expanded security and surveillance apparatus, including Guantanamo Bay, endangering privacy and civil liberties. All of these point to moral as well as financial costs.

The General Assembly makes social-ethical statements both for current social witness but also for the purposes of moral memory. Countless thoughtful Presbyterians care about the root causes of conflicts, the need for understanding even in disagreement, and the call to courage in peacemaking, including acts of forgiveness and generosity. The statements of the Assembly are intended to help every congregation be a community of moral discernment.

Thus at this time, the church looks to the lessons learned and prays that good may come of a violent death. Law is what separates justice from vengeance, but all law depends on human judgments as to its application. In a more ideal context, capture and trial by duly constituted authorities remain the way to hold evil persons to account. Similarly, undeclared wars create risks of exaggerating presidential power and the culture of government secrecy.

General Assemblies have warned about the dangers of militarism linked to religion, even our own Christianity, and have pointed to the shadow of empire that does not inspire confidence around the world. May this death free our nation to look forward but not forget the costly lessons of being provoked by terrorists, and may we resist the illusion that violence in itself provides easy answers.

The most fitting summary and application of Biblical truth in our tradition comes from our Confessions of Faith, of which the Confession of 1967 (9.45b) speaks most directly today:

God’s reconciliation in Jesus Christ is the ground of the peace, justice, and freedom among nations which all powers of government are called to serve and defend.

The church, in its own life, is called to practice the forgiveness of enemies and to commend to the nations as practical politics the search for cooperation and peace.

This search requires that the nations pursue fresh and responsible relations across every line of conflict, even at risk to national security, to reduce areas of strife and to broaden international understanding.

Although nations may serve God’s purposes in history, the church which identifies the sovereignty of any one nation or any one way of life with the cause of God denies the Lordship of Christ and betrays its calling.

Studies for Adult Christian Education from The Thoughtful Christian, an online resource from Westminster/John Knox Press:

For more information, contact ACSWP or the Presbyterian Ministry at the United Nations.

From Compassion, Peace and Justice

The Presbyterian Peacemaking Program offers a list of materials to help study and practice nonviolence. http://gamc.pcusa.org/ministries/peacemaking/study-and-practice-nonviolence/

Resurrection Living: Journeying with the Nonviolent Christ is the most recent study resource on nonviolence for use by individuals or groups.

Topical statements and resources of the General Assembly since 9/11:

The Presbyterian Peacemaking Program has identified resources for caring for those serving in the military and their families: