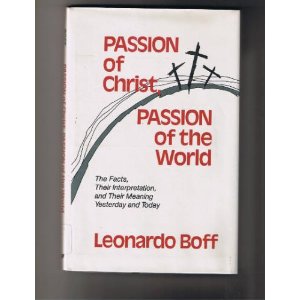 Liberation theology has its exegetes.  Leonardo Boff is a Brazilian Franciscan who has been among the leaders in defining the Biblical basis, the “theology” of liberation theology.  Once called to account by Rome, Leonardo Boff most recently (after the disastrous floods of February 1988) has also been among those religionists willing to practice what they preach.  On this occasion he endured arrest for encouraging favelhados, washed out of their shanty homes, to resettle on vacant land near Petropolis.
Boff’s Passion of Christ, ten years old in Brazil, has only in 1987 translated to English.  It is admittedly partisan in view.  Citing the theological division of Christology at Chalcedon in 451, Boff has chosen to follow the strand of Jesus’ humanity as being the one most meaningful for the poor and exploited people of the earth.  He says, “What I am attempting here is an exploration of the meaning of the cross of our Lord Jesus Christ for the context of our contemporary faith circumstances.”  He adds, “…that locus is the situation of captivity and resistance in which so many human beings live today—a locus very near that from which Jesus of Nazareth looked out upon his own historical reality.”  In other words, pretty grim.

Boff, following St. Francis, finds “God precisely in Jesus’ total, complete humanity…to the extent we take the incarnation absolutely seriously…as the total evacuation of dignity—to the same extent we shall accept ourselves, with all our fragility and misery, without shame or humiliation.”  He rejects negative interpretations of the cross and takes a positive approach.  “Jesus suffered and died in a struggle with the objective causes of suffering and death, then and now.”  But, “The glory of God does not consist in human suffering, deprivation, spoliation, and daily crucifixion. The glory of God consists in human life and human happiness.”

Boff develops a kind of social theology but sometimes at the expense of Jesus’ presence within the individual.  That, perhaps, is the cost of the social interpretation of the message of Jesus Christ: the corporate problems of humanity tend to supersede individual problems of human existence.  The implication is that human interaction should be the modus operandi of Christ in the world today.  “Through conversion,” Boff writes, “human beings, in the very act of welcoming the novelty of new hope for this world, cooperate in its renovation, by what they build in the way of political, social, and personal mediations.”  So Boff sees the love of Jesus beginning with individual conversion but as needing to act corporately.  The point is important because it is probably the main point of misunderstanding between North American individualistic religiosity and Latin American Christian collectivism.  The fear of religious (or any other) collectivism becoming a power trip is almost traumatic to North American democracy.  Yet, remember that Latin American theology sees North America as subservient to materialistic (capitalistic) power.

All power trips are potentially evil.  Boff understands this well enough when he writes that “power as domination is essentially diabolical—totally contrary to the mystery of God.”

Boff is more attuned with the individual when he notes that, “Salvation comes by way of our neighbor.  The purpose of religion is …to establish in us a permanent orientation to genuine love of the other—in whom, incognito, God is hidden…” So the expression of Jesus within and through the individual is a matter of extroversion not introversion.

Boff avers that, “No authority, not even ecclesiastical authority, that asserts itself independently of the community of the faithful can lay claim to a share in Jesus’ authority.”  The disturbing question is, who defines the “community of the faithful” that has now become so very exclusive?  Is it limited to the totally destitute of the earth?  Or just to that minority fraction of the destitute who happen to have heard of Christianity?

Perhaps the key for all professing Christians, regardless of their state of existence, is to be found in love and nonviolence.  As Boff states, “Renunciation of the structures and machinations of hatred is not the same as renunciation of opposition.  Jesus opposed, disputed, argued—but not…with the use of violence…Love has its own efficacy…and the certitude that the future belongs to right, justice, love, and a communion of sisters and brothers, and not to oppression, revenge, and injustice.”

Boff explores, in biblical exegesis, Jesus’ death as a crime and the question of how Jesus interpreted his own death. Boff insists, “…there is no historically textual evidence for a consciousness or knowledge on the part of the historical Jesus of his approaching death”  (But certainly Jesus was aware, Boff notes elsewhere, that he risked death).  “Jesus preached not himself but the reign of God… The reign of God did not mean another world, but this world.” Boff is concerned with Jesus’ life: “It is Jesus’ whole life that is redemptive.  His death is redemptive only in its identity as part of his life.

I will conclude with a sketch of Liberation theology, a summary of the way I think Leonardo Boff sees it.  Our total lives are in solidarity with the life of Jesus Christ, and his with ours. Jesus’ death was a part of his life, which was totally transcendent.  Jesus’ life (including his death) was a liberating life, a life liberated from the fear of death.  Jesus’ life was love made concrete and a promise of his continuing presence, within us and among us, as a real as opposed to abstract, receptor of our love.  God intended, through the mediation of Jesus Christ, that human existence on earth be happy and free.

I want to share one last quotation.  It is a cry that rings through the writings of many liberation theologians that I have read.  It is the keystone of the movement and the reason that Liberation theology will no doubt live and thrive and prevail in our troubled world: “Death is vanquished when it ceases to be the terrifying specter that prevents us from living and proclaiming the truth.”