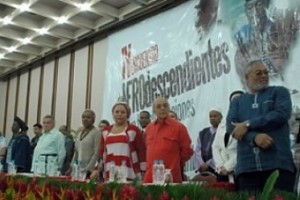 The fourth meeting of “Afro-Descendants in the Americas and the Caribbean,” which was attended by over 600 delegates from Latin America, the Caribbean, Africa, and the U.S., finished on Wednesday with the Declaration of Caracas, a document outlining the projects to be developed by the countries represented by participants.

The U.S. delegation was made up of James Early, the Smithsonian Institution’s Director of Cultural Heritage Policy of the Center for Folklife and Cultural Heritage; Samuel E. Lathem, President of the Delaware State AFL-CIO; Ajamu Baraka, Executive Director of the U.S. Human Rights Network; Joia Nuri, Chief of Staff for TransAfrica Forum; August Nimtz, representative of the U.S. Socialist Workers Party; and representatives of the Uhuru Movement and All African Peoples Revolutionary Party, among others.

During the meeting, which kicked off June 19 in Caracas, several proposals were discussed, including the need to consider racism as a crime against humanity and a strengthened humanitarian fund for Haiti, which was proposed by Venezuela to contribute to the reconstruction of the Caribbean nation that was struck by an earthquake on January 12, 2010.

Additionally, speakers at the event proposed the creation of a fund for the Bolivarian Alliance for the Peoples of Our Americas (ALBA) to fight poverty within Afro-descendants communities, which are represented in 80 percent of the member-nations of the regional bloc.

Aristóbulo Istúriz, First Vice-President of Venezuela’s National Assembly and one of the promoters of the event, stated that the Declaration of Caracas will be presented at the founding summit of the Community of Latin American and Caribbean Countries (CELAC), a new regional organization that will be created in Caracas on July 5.

“In this document we propose the need to recognize the African and Afro-descendant contributions to the nationality of our countries and, consequently, include in the CELAC’s founding documents the social debt we owe the continent’s Afro-descendant and indigenous peoples,” said Istúriz.

Read our Fact Sheet about Afro-Venezuelans and the fight against racism in Venezuela.

Read other news about activities at the Venezuelan Embassy to the U.S. to celebrate the month of Afro-Descendants.

Venezuela Honors Afro-Descendants in Latin America and the Caribbean