* This text was published at Folha de São Paulo, Brazil. Nina Horta writes for the newspaper for more than 30 years and she engaged the chapter of my first book that was published in a journal in Brazil recently: “Christians and Yorubá People Eating Together: Eucharist and Food Offerings.”

In One or Someone Else’s table 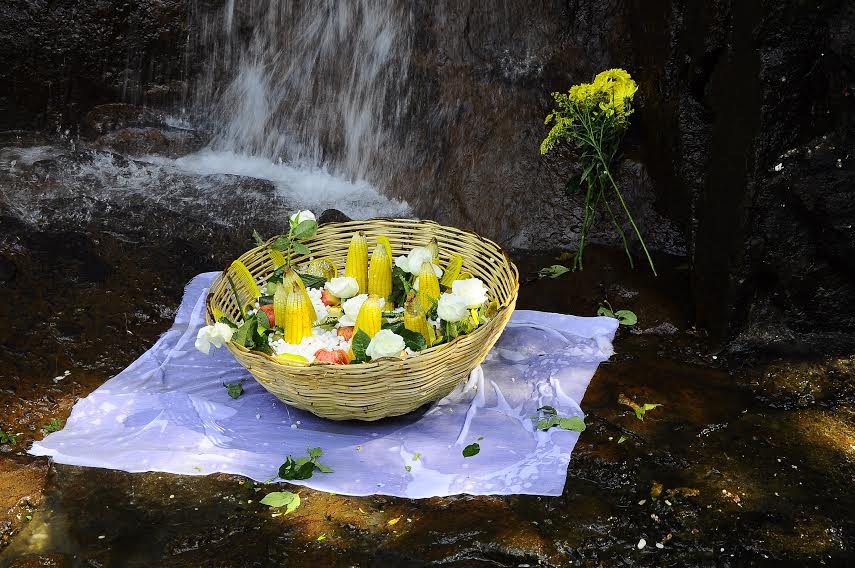 My pastor attends to candomblé services and eats acarajé without dendê palm oil.

Well, quite a while ago, when newspapers only existed in print, a Brazilian boy that was studying theology in New York, Claudio Carvalhaes, wrote me. He was a funny, intelligent student, who asked me the most absurd question. He wanted to know how to cook corncobs, because he had burnt them all. From this question, it is quite clear that he had absolutely no clue on what to do in a kitchen, since even after my answer he kept burning the corncobs. This could only result from good distractions, he was writing or reading while cooking and any and every culinary advice would only end in burnt pots, scorched pans, and a ruined dinner.

His family is from São Paulo, and he came to see me here while he was visiting his folks. Every time one reader comes to see me, I nearly die of anxiety: I imagine their deception, the absence of conversation topics that will grab me by my throat but in the end, it works out and I have to this day Claudio Carvalhaes as a dear friend. He was remarkably active, and I get tire just of watching his pace. Astonishingly communicative, he rummaged through the whole house looking for books that could interest him, and he came back to the US.

He wanders the cyberspace, crying against the injustices of this world, and he never lets any injustice escape!

From time to time, I ask myself whether those burnt corncobs were only an excuse to engage in a conversation with someone knowledgeable about food, because he was already looking into one of his main research themes, food as an object to bring people closer and prevent religious intolerance.

He recently wrote an article on two religions in Brazil: (reformed) Christianism and afro-Brazilian Candomblé. I will not repeat his words, but I will tell in my own way what he already told me, always with fear of making some mistakes and my memory failing, but it is easier to understand with more common words. He is clear as water, but he has been writing mostly in English. (I remember the broad picture, I forget the name of the schools where he studied, when, dates, but here I go, if someone someday needs these details they can ask me or Google.)

Claudio was a Sao Paulo boy like all others, with a house, father, mother, brothers, and school. He grew up as a Christian (a religion who had an enemy, as if it used this enemy to stand better). This enemy was Candomblé. Catholics do not particularly fell like Candomblé is an enemy, but protestants do. And Candomblé was something forbidden, one should not even pass by a Candomblé worship place (“terreiros”), because the devil himself could be nearby! If the soccer ball strayed away to a terreiro, better let it go for the devil might get it himself first.

Candomblé, unlike other religions we know, lacks sacred texts that we can study. He could not read about Candomblé, and to be honest neither he wanted to.

But he went to study Theology and his mind gradually changed. In addition to try to not burn his corn for dinner, he began to see that the people who followed another religion were simple human beings, just like him, just like anybody else from any religion.

Candomblé had its well-anchored traditions on food and dance, two things that dwelt on Claudio’s mind, always full of theological studies in his head. However, something kept sticking to his mind, like those annoying songs that refuse to go away and keep drumming on our heads. And the point was the history of food as a point of contact.

Our Claudio thinks that religions should keep their structures, but understanding and respecting other traditions. That was the only way to have peace and mutual understanding in the world. How to avoid wars and injustices without working on a continuously expanded dialogue?

And he, a Brazilian, had never been to Candomblé. It was difficult, since it was a religion from a land adapted to another, subject to racism, and without anything written like a Bible, relying only on mouth-to-mouth teachings transmitted orally.

He had a crush on the Eucharist and the Body and the Hospitality, and someday he realized that Candomblé also had their foods and hospitality. And, daring as he has always been, he figured that in order to properly understand what happened in a terreiro, he had to go to one, live with the people there, take part in their rituals, and above all eat with them. Eat and pray and dance, because after all, how is it possible to get the soul without touching the body? And the music. Everything that the Protestants lacked abounded in Candomblé. How to find a space to talk, share visions of the world, discuss racism, life in general, joys, inequalities? 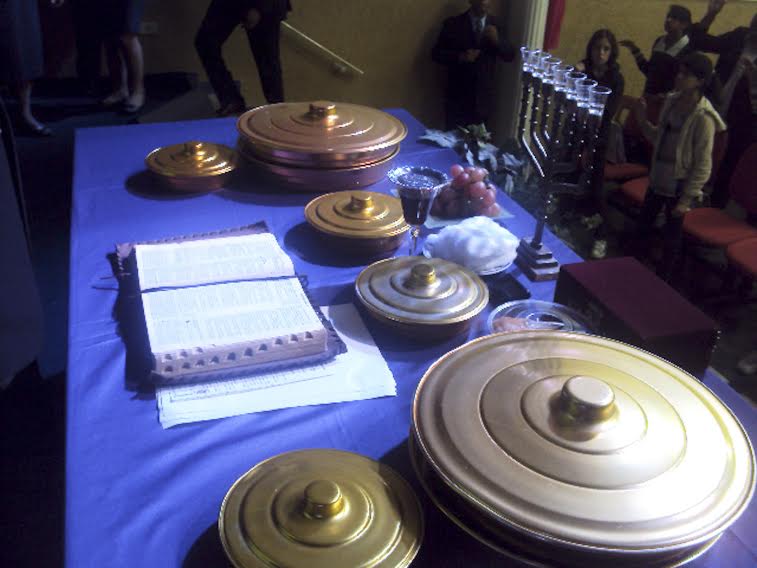 Claudio believed that it had to be done together at the table, one’s table or the other’s. The common Eucharist table could be a table for both of them.

At the table, the thin line between the body and the spirit is broken. And they must talk about people, the money they have to live, who they should vote for, and so on.

We, Brazilians, know how much Claudio won in terms of food. We know how important food is to Candomblé, their beans and acaçás (a ritual food made from corn) and dumplings and more of this and that, and the care and fervor devoted to its preparation.

And he sneaked into their lives, because you must live together to understand. Not only that, our pastor had also to give himself, to offer his space, his way of living. And so did he.

What grew among them was joy, hospitality, belonging. And I can imagine how much our pastor ate, drank, danced and had great fun. The terreiro, for their part, must have found the half sad protestant face quite odd.

African religiosity has the power to recreate their worlds using the religions that are at hand. Also important is the rapprochement that African religions have with the land, and another interest of Claudio’s was ecology.

To Protestants, conversation should also happen at the table, under the supervision of the Holy Spirit. In Candomblé, the spirit is the Axé, with its white clothes, songs, and energies. The Axé and the Holy Spirit can join themselves against too much evil and find the direction toward good things. We can become better through one another, through conversation between us, without losing sacred convictions, and none of the religions needs to loose theirs.

What we can do is to enlarge our alterity, becoming more generous and tolerant.

That is the Holy Spirit and the Axé, recreating the world, doing, acting. To attain his objectives, which Carvalhaes knows to be difficult and time-consuming, he is always thinking about food. Let us say he is a religious foodie. A lover of the great table that bring us all together.

Eat together is about love, community, shared memories. We are what we eat and, as Christians, we share the bread. With the memory of Christ. The Yorubás also offer sacrifices, the scapegoat, a current that keeps the life that unites the animals and us. To expand our faith, both of Christians and the Orixás, one only needs to think about our cosmogony. In both religions, food celebrates God’s creation, and we fell part of a bigger ecosystem and the life is lived in the world, among plants and animals and rivers and seas. Some please the Christ, others the Orixás.

Claudio Carvalhaes thinks that maybe the people of Candomblé could teach Christians how to engage more powerfully in the banquet, the shared meal, the sacred food.

And what would result from this mixture of rituals and foods?

We would have Christianity with the Eucharist, remembering the penitence, the fasting, the hardships. The Candomblés singing, eating, celebrating, laughing, speaking loudly. Two ways of moving around the sacred, two ways that could very well benefit from each other.

Looks like an easy union, but it is a difficult dialogue. What one can learn from the other?

Protestants go into every question in Christianity, to criticize and evaluate, trying to avoid the risk of becoming a stale, idolatrous community and to keep on the path of the reformation.

But, albeit slowly, it is mandatory to try.

I firmly believe that doing is the most important thing when we want to be accepted by others.

During our vacation in Bahia, we really wanted to meet Mother Menininha and her terreiro. It wasn’t easy. After deploy all possible seduction, we succeeded. My husband was there because we were, with no existential questions nor critics to be made. When he saw Mother Menininha, he realized that her TV was broken and didn’t work, to her great chagrin. He started to mess with the wires, tinker with the TV until he manage to do what seemed to be impossible. 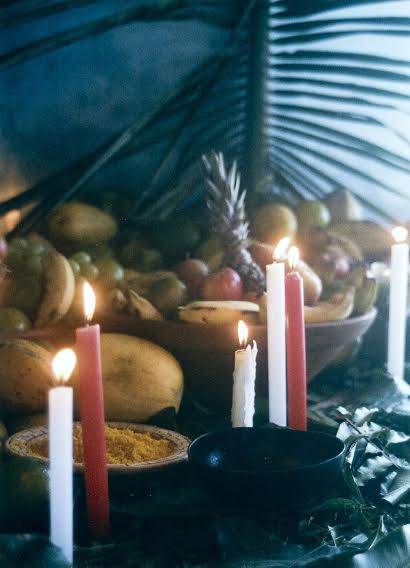 Mother Menininha instantly loved him. He laughed at him as the menininha (little girl) that she was. After he complied with his duty to her, my husband went fiddle with the small pieces of paper that the believers left with their requests. He read them all. Mother Meininha did not even bother. We could see everything and then some, only because someone acted as normal, without intellectualizing anything, went there and figured out a way to let Menininha watch her TV show.

Pictures by “Marcão Palhano.” To be able to get the photos email him at olhodobturador@gmail.com

To read the text:

Get the PDF here: