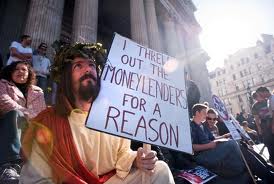 Two days ago, Tony Perkins, the president of the Family Research Council, made an astounding claim. Writing about the parable of the minas, or talents (Luke 19), he argued:

“One of the last instructions Jesus gave his disciples was “Occupy till I come.””

Perkins asserted, first, that Jesus meant this parable to be a positive example for his followers; and second, that the parable demonstrates that Jesus supported unrestricted, free-market capitalism. He was wrong.

As the truism states “a text without a context is a pretext for a prooftext.” Sadly, Perkins read the parable of the minas out of context. What is the parable’s context? It varies, as the parable occurs both in Matthew 25 and in Luke 19. Let’s start where Mr. Perkins starts — with Luke.

In Luke, this parable follows the miraculous conversion of Zacchaeus. Zacchaeus is a tax-collector — someone who works for the occupying power Rome, and who uses his power to defraud his neighbors (cf. Luke 3:12). Imagine the astonishment of Jesus’ disciples when Zacchaeus voluntarily gives up half of his possessions to the destitute, returns all monies he has defrauded and then imposes upon himself a 300 percent fine to be given to those he has cheated just because Jesus comes to dinner (Luke 19:8)! Can you imagine that happening on Wall Street?

Zacchaeus’ conversion is the immediate literary context for the parable of the minas in Luke. According to Luke, Jesus tells this parable “because [the disciples] supposed that the kingdom of God was to appear immediately” (Luke 19:11). Of course they did! Seeing Zacchaeus’ miraculous transformation, the disciples probably assumed that the immediate return of the promised day of “good news to the poor” was immanent (Luke 4:18-19). Instead, Jesus tells them the parable of the minas.

Consider this: Jesus doesn’t begin this parable “The kingdom of heaven is like…” And, the slaveowner, whom Perkins assumes is the hero, is described as someone who has gotten rich through violence and cheating other people out of the fruits of their labor. The slaveowner does not deny this. (Luke 19:21-22).

More context: this time cultural. The economy of Jesus’ day was a peasant economy. In this culture, the belief was that if you got rich, you got it by cheating someone else (Rohrbaugh). Honorable people did not cheat other people and profit off of them. Honorable people were content with what was theirs in the first place. This is why the slaveowner in the parable doesn’t deny his status as a rich, violent cheat. He is one.

The slaveowner’s actions contrast sharply with Jesus’ teachings about money in Luke’s gospel. Jesus announces his mission as the proclamation of good news to the destitute (Luke 4:18). Jesus honors those are destitute, weeping, hungry and maligned while shaming those who are affluent, laughing, stuffed and praised (Luke 6:20-24). Jesus sees wealth and something that can make you unable to be a fruitful disciple (Luke 8:14; 14:31-33; 16:13; 18:18-23). And Jesus tells kingdom parables against hoarding wealth (Luke 12:13-21); and against ignoring the destitute at your gate (Luke 16:19-31).

Given this context, the only hero of the story of the minas is the slave with one talent. This honest slave judges his master’s actions, refuses to participate in corrupt behavior, acts with honor and integrity, and tells the truth about his master’s injustice. For his trouble, he faces impoverishment, banishment, shame, and even execution, which is perfectly consistent with the path of discipleship that Jesus has described throughout Luke’s gospel. Jesus has told this parable not about the way things ought to be, but about the way things actually are under Roman occupation. The rapacious win. The honest are impoverished. The protestors are killed.

So why would Jesus tell this story? For the same reason that Jesus says “the one who would be my disciple must take up a cross and follow me” (Luke 9:21-26). Jesus tells this story because it’s true. Jesus tells it to curb the enthusiasm of the disciples, to remind them of the true cost of discipleship

Finally, consider the same parable in a different context, Matthew’s gospel. There, it stands as part of a diptych, a two-paneled picture that constrasts the world that is with the world that ought to be. One panel presents a picture of the world run by a rich and violent cheat who acts like a king and requires his slaves to be corrupt or face banishment.

But on the other side of the diptych, we have a picture of the final judgment of the world by the Son of Man, the apocalyptic figure usually equated with Jesus or God. In it, the Son of Man sits enthroned, judging between the people, just like the slaveowner taking account of his slaves. But, his criteria are radically different:

Jesus is clear. A rapacious slaveowner does not model Christian behavior. Instead, look to the truthtellers and advocates, to those who work for the least of these. These, Mr. Perkins, truly “occupy” Christianity.

As they were listening to this, he went on to tell a parable, because he was near Jerusalem, and because they supposed that the kingdom of God was to appear immediately. So he said, “A nobleman went to a distant country to get royal power for himself and then return. He summoned ten of his slaves, and gave them ten pounds (minas), and said to them, ‘Do business with these until I come back.’ But the citizens of his country hated him and sent a delegation after him, saying, ‘We do not want this man to rule over us.’ When he returned, having received royal power, he ordered these slaves, to whom he had given the money, to be summoned so that he might find out what they had gained by trading. The first came forward and said, ‘Lord, your pound has made ten more pounds.’ He said to him, ‘Well done, good slave! Because you have been trustworthy in a very small thing, take charge of ten cities.’ Then the second came, saying, ‘Lord, your pound has made five pounds.’ He said to him, ‘And you, rule over five cities.’ Then the other came, saying, ‘Lord, here is your pound. I wrapped it up in a piece of cloth, for I was afraid of you, because you are a harsh man; you take what you did not deposit, and reap what you did not sow.’ He said to him, ‘I will judge you by your own words, you wicked slave! You knew, did you, that I was a harsh man, taking what I did not deposit and reaping what I did not sow? Why then did you not put my money into the bank? Then when I returned, I could have collected it with interest.’ He said to the bystanders, ‘Take the pound from him and give it to the one who has ten pounds.’ (And they said to him, ‘Lord, he has ten pounds!’) ‘I tell you, to all those who have, more will be given; but from those who have nothing, even what they have will be taken away. But as for these enemies of mine who did not want me to be king over them– bring them here and slaughter them in my presence.'” (Luke 19:11-27 NRSV)

One thought on “On Minas, Occupations and Tony Perkins, by Rev. Margaret Aymer, Ph. D.”